Accessibility links
Mon Dieu! Comics On Display At The Louvre Paris' Louvre Museum, which bills itself as the world's largest fine arts collection, is experiencing an aesthetic revolution this winter: For the first time ever, it's exhibiting comic strips.

Listen
Mon Dieu! Comics On Display At The Louvre 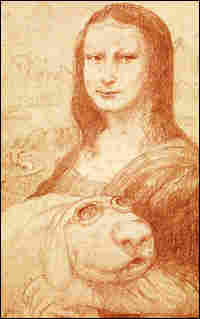 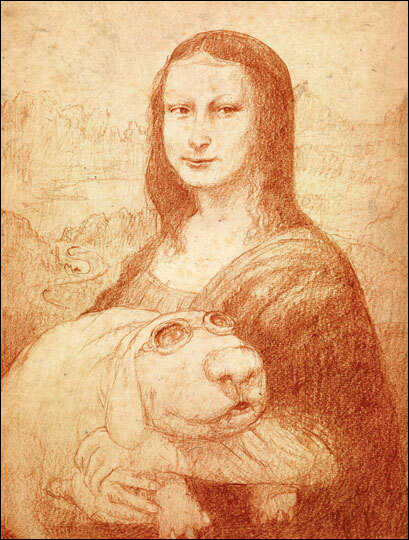 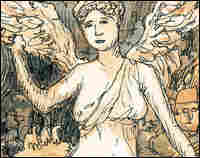 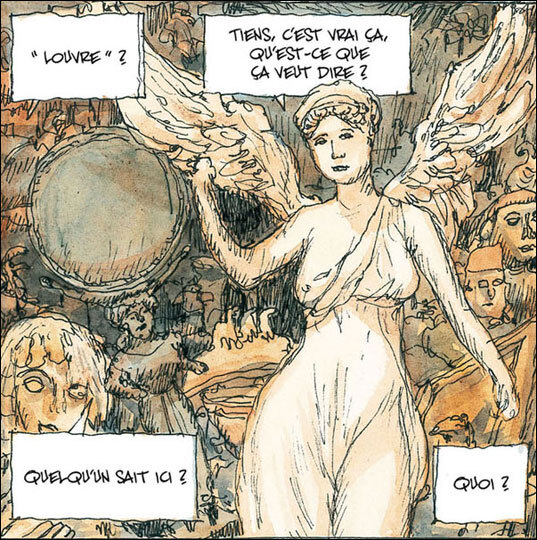 Visitors from the future puzzle over the Louvre's treasures in Nicolas de Crecy's comic strip.

Paris' Louvre Museum, which bills itself as the world's largest fine arts collection, is experiencing an aesthetic revolution this winter: For the first time ever, it's exhibiting comic strips.

The show was put together by Fabrice Douar, the director of the Louvre's publishing division, who commissioned three comic book artists to create wall-length strips set in the museum itself. Douar says he wanted to bring the museum into the 21st century and restore its role as a central part of the contemporary city — in short, to put a little bounce into the museum's sometimes intimidating marble atmosphere.

Plus, Douar admits, the new exhibit fits well with his lifelong addiction to comic books, known as bandes dessinees in French.

One day in 2002, Douar put his obsession together with his job as chief editor of Louvre books and — voila! — the idea for the exhibition was born.

The three strips currently on display are in fact drawings from the first three comic books ever published by the Louvre. One, by artist Nicolas de Crecy, is set thousands of years in the future and features a museum guide who is a cross between a pig and a dog.

De Crecy's pig-dog can speak intelligently about all of the museum's art objects — from the naked pre-Hellenic statuary to the Mona Lisa. In the strip, he's charged with leading a group of archaeologists through the museum. But the archaeologists, who believe they have discovered a lost city preserved beneath a glacier, get almost everything wrong when they look at the art.

"When they saw the name E. Delacroix they think that it means Delacroix House and they conclude that it's a bordel, it's a whorehouse," says de Crecy.

The scientists' tendency to make uninformed conclusions about what they find in the museum — rather than merely appreciating the objects for their own beauty — is a not-too-subtle swipe at pointy-headed academics.

Overall, Douar argues that the exhibit is more than just a tip of the hat to contemporary pop art. He says that bandes dessinees have a pedigree as old as any of the Louvre's holdings from the Renaissance — from tapestries that tell stories to the work of the great Italian painter Carpaccio, who did a series of works telling the story of St. Ursula.

To find the exhibit, it you have to go down into the medieval bowels of the Louvre palace, to the original stone moat that was only excavated in the 1980s. It's a fitting place, says Douar, to restore comics to their ancient roots at the foundation of Western art.