"The Rabbit, The Bat, and The Reindeer" 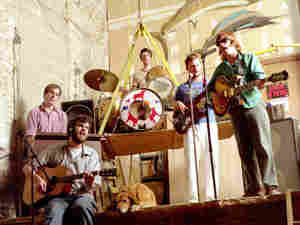 Filtering classic rock and pop hooks through a willfully lo-fi aesthetic a la Pavement or Guided by Voices, Philadelphia's rapidly rising Dr. Dog sounds both timeless and immediate. Click the link above to hear Dr. Dog perform live in concert from WXPN and World Café Live in Philadelphia.

Formed in 1999 as a recording project for two members of the more traditional indie-rock band Raccoon, Dr. Dog became a full-time gig when Raccoon folded in the early '00s. Dr. Dog's first two records, 2001's Psychedelic Swamp and 2002's Toothbrush, were both self-released but failed to make an impact outside of the Philadelphia area. Still, the group's fortunes changed when My Morning Jacket's Jim James handpicked Dr. Dog to open for his band on its 2004 tour. Subsequently picked up by an indie label for 2005's Easy Beat, the group won raves for its fascinating combination of psychedelic pop hooks and Beach Boys-esque vocal harmonies.

As Dr. Dog's national reputation continues to grow — its fifth album, Fate, was a critics' darling in 2008 — the band remains true to its bouncy rock style, which mixes intricate harmonies with '60s pop beats. Dr. Dog wasn't afraid to come back with another concept album: This one is built around the titular theme of fate.