Accessibility links
Student In Bogus Oil, Gas Bids Faces Prosecution College student Tim DeChristopher bid $1.79 million at a federal auction of oil and gas leases in sensitive areas with no intent or ability to pay. This week, the Interior Department voided the leases, but the Justice Department may prosecute him. 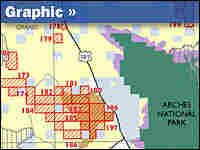 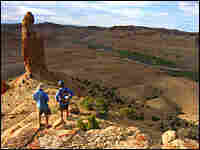 Hikers look into the White River Canyon in Utah, which is close to areas that the Bush administration proposed for oil and gas leasing. Ray Bloxham/Southern Utah Wilderness Alliance hide caption 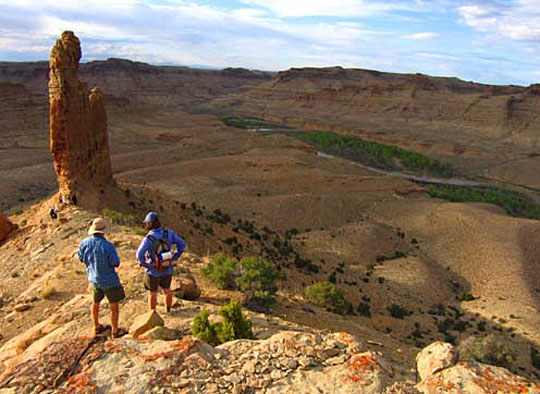 Hikers look into the White River Canyon in Utah, which is close to areas that the Bush administration proposed for oil and gas leasing. 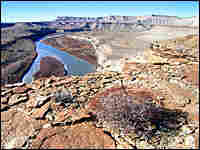 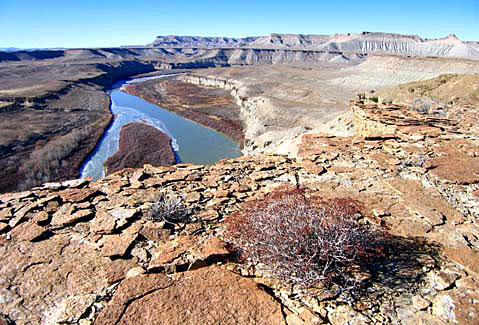 Oil and gas drilling was possible on the ridges above Desolation Canyon in Utah under a leasing plan sought by the Bush administration. New Interior Secretary Ken Salazar suspended the plan.

The last question on the final exam in economics was timely for Tim DeChristopher. It focused on a federal auction of oil and gas leases later that same December morning in downtown Salt Lake City. DeChristopher was planning to join protesters at the auction as soon as he finished the University of Utah exam.

The question asked whether the final prices of the energy leases auctioned off that day would accurately reflect the true costs of developing oil and gas, if the bidding was limited to only oil and gas companies.

"No," DeChristopher wrote, owing to hidden costs of environmental damage, the proximity of national parks, lost recreational opportunities and pollution resulting from the energy produced. "And that kind of fired it up in my mind again," the 27-year-old economics major recalls.

So, when DeChristopher arrived at the offices of the federal Bureau of Land Management, he wanted to do more than march silently outside with signs, which is what other protesters were doing.

"It was something that I'd seen at a lot of other events," DeChristopher thought. These were people who "wanted to make a statement but knew that they were fighting a losing battle. I knew that I wanted to do more. And so I resolved to go inside."

The auction inside came after a seven-year battle between the Bush administration and environmentalists. The sensitive land they fought over was adjacent to and near some of Utah's scenic and wild crown jewels, including Dinosaur National Monument, Desolation Canyon, Arches National Park, Canyonlands National Park and Nine Mile Canyon, the site of one of the world's biggest concentrations of ancient Indian rock art.

The region also holds deposits of oil and natural gas, and the Bush administration was pushing hard to get thousands of acres leased for drilling before Obama assumed power.

"I figured I would be dragged out by security as soon as I went in," DeChristopher recalls. "I'd yell something or throw a shoe or something like that. But, instead I walked in and they said, 'Hi, are you here to be a bidder?' And so I said, 'Yes I am.' All it took was a driver's license to get inside."

DeChristopher did not look like the typical bidder. He hadn't shaved in days. He still had his book bag slung on a shoulder. And he wore brown Carhartt pants and a reddish-brown outdoorsy shirt. He looked more like a disgruntled tree-hugger.

The bidding was already under way. DeChristopher held back at first, but then he sporadically raised his white laminated bidding card with the number 70 in big black numerals. That drove up the prices on the parcels being leased. Then he decided to go all out, holding his bidding card high constantly. A dozen parcels went to No. 70 at a cost of close to $2 million.

Kathleen Sgamma was watching from a few rows back. She is director of government affairs at the Independent Petroleum Association of Mountain States, an industry trade group.

"The brokers who were there, they all know each other, and they pretty much knew that he wasn't a typical bidder," Sgamma says, adding she had never seen bogus bidding like this before. "We were thinking that perhaps he was representing an environmental group that had some money to put up."

The auction organizers noticed, too. "A federal agent came over and showed me a badge and said let's go talk outside." DeChristopher was placed under arrest, taken to an office and questioned for about two hours.

"I told him very clearly that my intent was to disrupt this auction," DeChristopher says, unapologetically. "And that it was an act of civil disobedience because I felt this auction was a fraud against the American people and a threat to my future."

Environmentalists had sued over the auction, claiming the Bush administration had failed to follow federal environmental laws. The Obama transition team also criticized the sale and vowed to review it. A federal judge issued a temporary restraining order. This week, Interior Secretary Ken Salazar canceled 77 of the leases issued at the auction, including 11 won by DeChristopher.

Back in December, the federal agent told the college student he would be hearing from the Utah U.S. attorney's office about possible criminal charges. Then DeChristopher was released and mobbed by reporters.

The attention triggered more than 1,000 e-mails, phone calls and blog postings, most hailing DeChristopher as a hero for confronting the Bush leasing plan directly and risking jail in the process. Some people sent money — more than $100,000 — so DeChristopher could actually make payments on his bogus bids. Cell phone video of the bidding is posted on YouTube.

DeChristopher believes the reaction stems from "a new perspective of just an average American really believing that I had a role to play in my government and that I wasn't helpless to stop this destruction."

He then compared himself, with a laugh, to "that little fish in the Amazon that swims up your urine into your urethra and takes you down from the inside out."

Industry representative Sgamma is not amused. "We're a nation of laws," she notes. "There's a democratic process in place if you don't like what's happening. If we all just decided we wanted to change the laws unilaterally, that would run counter to our democracy."

Sgamma also believes DeChristopher didn't change anything. He forced prices higher on some parcels, but they still went to energy companies. And some of the leases he won could go out for bid again, after an Obama administration review. Even some environmentalists say DeChristopher had no direct effect on the leasing issue.

"I find it very difficult to say that his actions had any impact on the timing," says Stephen Bloch, an attorney for the Southern Utah Wilderness Alliance. Bloch adds that the lawsuit already under way had forced the Interior Department to postpone actual issuance of any leases even before the auction took place. Further rulings expected in that suit and the suspension of the leases by the Obama administration could keep drilling rigs off some parcels for years, if not forever.

DeChristopher could still go to jail. "The decision to withdraw the leases does not wipe the slate clean," said U.S. Attorney Brett Tolman this week in a written statement. "We will continue to carefully review the facts in this case and, if appropriate, present it to a grand jury." An indictment would very likely transform DeChristopher from folk hero to environmental martyr.