Chirac Leaves Behind a Mixed Legacy May 5, 2007

The French go to the polls Sunday in a second round of voting to decide who will be the country's next president. Last month, socialist Segolene Royal and conservative Nicholas Sarkozy were chosen for the runoff from a field of 12 candidates.

Royal, who trailed Sarkozy after the first round by 2 million votes and has been consistently behind in the polls, has spent the last two weeks trying to make up that deficit.

During that time, the candidates' differing styles, personalities and visions for France's future have been clearly on display on the campaign trail. Both are trying to attract the 7 million voters who cast their ballots for centrist candidate Francois Bayrou, who finished third in the first round of voting.

Sarkozy advocates less government control over the economy, while Royal has stressed ensuring a fairer society where everyone has an equal chance. 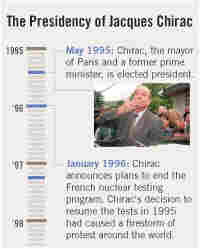 The people of France will choose a new president on Sunday in the second and final round of the country's elections — and this time it will be a straight left-right choice.

The vote will be a run-off between the two winners of last month's first round, conservative Nicolas Sarkozy and socialist Segolene Royal. Both have been fighting for the center-ground of French politics and, in particular, for the supporters of Francois Bayrou, the independent candidate who failed to qualify in last month's preliminary election.

Twelve candidates were on the ballot for the initial round of voting April 22. Sarkozy and Royal garnered the most votes, moving them into the final battle May 6.

Although most independent voters have been telling opinion pollsters that they lean towards Royal, Sarkozy is still ahead in the polls as Election Day approaches. Here are brief profiles of the two candidates, in order of their standing in pre-election polls: