Accessibility links
Queen, Street Sense Thrill Derby Spectators On the latest stop of her six-day state visit, England's Queen Elizabeth II attended the annual running of the Kentucky Derby at Churchill Downs. She witnessed one of the more exciting Derby's of recent years, with horse Street Sense moving from 19th position to the front to win the race.

On the latest stop of her six-day state visit, England's Queen Elizabeth II attended the annual running of the Kentucky Derby at Churchill Downs. She witnessed one of the more exciting Derby's of recent years, with horse Street Sense moving from 19th position to the front to win the race. 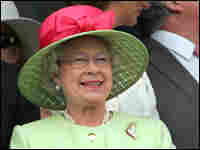 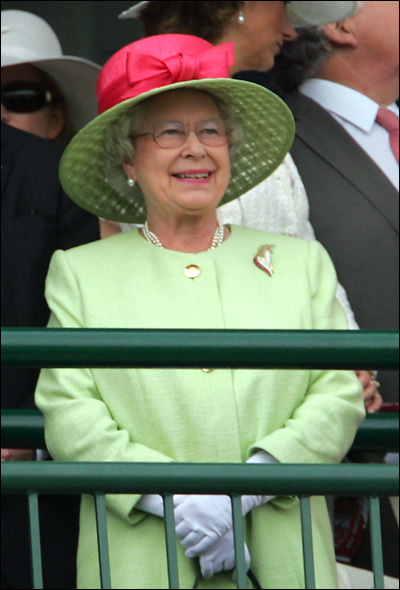 ADAM HOCHBERG: Queen Elizabeth's stay at the derby was what the British Embassy called a private weekend. Though it came in the middle of an official state visit, the queen and Prince Philip looked at it as something of a day off when they did little but watched the race, attend some private receptions, and observed the gazes of fans in the grandstand.

DONNA CREST: I can't really see her. There are just a lot of people standing around. Somebody thought maybe she might be up there in the top suite, I guess.

HOCHBERG: Donna Crest of Louisville stood on the grandstand bleachers with her binoculars aimed not at the horses on the track, but at the luxury suites overhead. Though Crest ever caught a glimpse of the royal couple, she said she still felt honored to be in their presence.

CREST: I always watched all the programs that had Prince Charles and what's going on with the family, when the princess died, you know, what happened to her. Anytime there's news about them, I always follow.

HOCHBERG: Did you ever think you'd see her here in Louisville?

HOCHBERG: Though a few fans caught a glimpse of the queen, she did appear briefly in front of photographers. Before she was escorted to her balcony seat in an exclusive part of Churchill Downs, she stopped to admire the Kentucky Derby trophy and greeted a handful of local dignitaries including Kentucky Governor Ernie Fletcher.

ERNIE FLETCHER: She came in and was very kind, very gracious. She looked marvelous, smiling, happy, and seemed to be very glad to be there, and she was so well received. And so we were very honored.

HOCHBERG: Yesterday marked the first time the queen's attended the Kentucky Derby, but she's not a stranger to Kentucky. As an avid horse fancier, she has visited some of the area's farms in the past. For a time, she stabled some of her own horses in the state. Dickie Arbiter, a former Buckingham Palace press aide, says the queen has been to most of the major races in Europe and was eager to see the derby in person.

DICKIE ARBITER: Well, the queen has been interest in horses ever since she got a pony when she's in her very formative years. And the interest has carried right through life; she rides even today at the age of 81. She still refuses to wear a hard hat, puts a scarf over her head and off she goes.

HOCHBERG: Along with 154,000 other fans at Churchill Downs yesterday, the queen saw a memorable race and an exciting come-from-behind victory. The number seven horse, Street Sense was favored going into the derby, but started off slowly and won at early point running 19th in the 20-horse field. But as jockey Calvin Borel rode him along the rail, Street Sense eventually moved to the front, overtaking second place finisher Hard Spun and winning by two and a quarter length.

HOCHBERG: Borel, who had already ridden Street Sense to a Breeder's Cup Juvenile Championship last year, said yesterday's victory was the highlight of his 25-year career as a jockey.

CALVIN BOREL: I always dreamed about winning this race, you know. Winning this race and winning the Breeder's Cup was always - it's always a jockey's dream. It's the greatest moment of your life, you know, to pass the wire in a Kentucky Derby in front.