Accessibility links
Teachers' Union, Members At Odds On Prop. 8? California's teachers union put up $1.25 million to fight the controversial gay marriage ban passed last November. At the same time, individual public school teachers were giving more money to enact the ban than to defeat it, according to an NPR analysis. 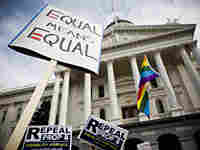 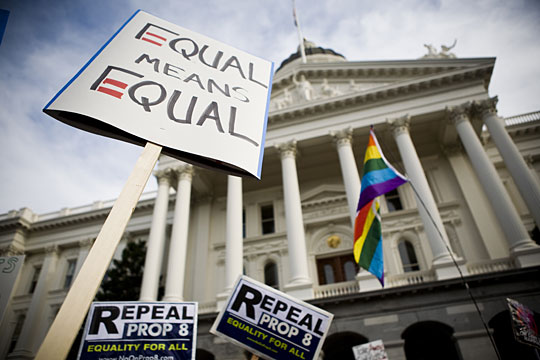 Supporters of gay marriage rally on the steps of California's state capitol in Sacramento last November.

As California's legal and cultural conflict over same-sex marriage played out this fall, the state's teachers union put up $1.25 million to advocate against the gay marriage ban.

But at the same time, individual public school teachers in the state were giving more money to enact the ban than to defeat it, according to an NPR analysis of Proposition 8 contribution data recently released by the California secretary of state.

Teachers, aides and counselors in California public school systems gave about $2 to support the marriage ban for every $1 they gave to oppose it. The educators gave some $450,000 in individual contributions to advocates supporting the ban and about $210,000 to those opposing it, according to the NPR analysis.

Proposition 8 passed on Nov. 4, overturning a California Supreme Court decision that allowed same-sex marriages in the nation's most populous state. Gay-rights supporters quickly challenged the measure's constitutionality. The state's highest court will begin hearing arguments in the case next month.

Disclosure Comes Against A Bitter Backdrop

During and after a campaign that cost tens of millions of dollars and featured incendiary rhetoric on both sides, arguments over financial support for and against the ballot initiative have been intense.

Supporters of Proposition 8 sought to keep secret the names of those who gave less than $1,000, but they were rebuffed by a federal judge. The ProtectMarriage.com-Yes on 8 committee argued that previous disclosures had exposed donors to harassment, intimidation and death threats.

And responding to reports about an investigation of its expenditures, the Mormon church said this week its support consisted of in-kind donations of about $190,000.

On the other side of the debate, the California Teachers Association drew fire for its decision to help finance the opposition to Proposition 8 with $1.25 million of its members' money.

Critics panned the CTA for using the funds to weigh in on a controversial social issue with no direct connection to education or classroom teachers.

"It was frustrating," says Fred Vanderhoof, a sixth-grade teacher who has taught at Nelson Elementary in Pinedale, Calif., for the past 20 years. "But I was not surprised, because they've had a liberal agenda for a couple of decades."

Vanderhoof, who does not belong to the union, gave $650 to support the gay marriage ban. To him, it is unremarkable that teachers gave more money in favor of the ban than against it.

"I think that as public school teachers, we are with these young people every day and we see the problems that they have — not understanding their sexual identity and their sexual roles, male and female." Gay marriage, he says, "is one more thing happening that is not going to help them. I think we teachers see that."

As for the union, spokeswoman Sandra Jackson says the group's elected policymaking body of about 800 classroom teachers saw Proposition 8 as important enough to take a position, whether or not it bears directly on education.

"It's thought to take away the marital rights of same-sex couples," she says. "Our concern was the overall civil rights issue."

The union joined the court fight against Proposition 8 and filed a brief saying, "There can be no question that Proposition 8, if upheld ... would undermine the very structure and intent of our Constitution to preserve and protect individuals' inalienable rights despite the vicissitudes of majority sentiment."

Mike Antonucci, a teachers union watchdog and blogger, says union leaders tend to be more liberal than the rank-and-file they represent.

A few years ago, he produced a report about the nation's largest teachers union, the National Education Association. He wrote that the group's own surveys of its members' opinions demonstrate "how an organization of 2.7 million members of widely divergent political and social views can end up championing a narrowly liberal worldview."

Antonucci says, "As I understand it, there's a very powerful gay and lesbian caucus" within CTA's policymaking council.

Union spokeswoman Jackson rejects the argument that the union's leaders lean further to the left than its typical members do.

"I think the CTA does represent the majority of its members," she says. "I don't believe that the overall membership is more conservative than the leadership. If so, I think we would hear about it."

Jackson says the union heard from many more members who supported the group's position than from those who opposed it.