Accessibility links
Jamie Ford's 'Corner Of Bitter And Sweet' Host Scott Simon talks with first time novelist Jamie Ford about his book Hotel on the Corner of Bitter and Sweet. The book reflects some of Ford's own family history, his fascination with Seattle, his passion for jazz, and buried secrets in families that sometimes come spilling out.

Host Scott Simon talks with first time novelist Jamie Ford about his book Hotel on the Corner of Bitter and Sweet. The book reflects some of Ford's own family history, his fascination with Seattle, his passion for jazz, and buried secrets in families that sometimes come spilling out.

This is Weekend Edition from NPR News. I'm Scott Simon. The "Hotel on the Corner of Bitter and Sweet" is an actual place. It's also the title of Jamie Ford's debut novel. It is Seattle's Panama Hotel, where an old man named Henry Lee stands as the book opens and remembers an old, doomed love.

"Hotel on the Corner of Bitter and Sweet" reflects some of novelist Jamie Ford's own family history, his fascination with Seattle, his passion for jazz, and buried secrets in families that sometimes just come spilling out.

Jamie Ford joins us from the studios of KGPR in Great Falls, Montana. Thanks so much for being with us.

Mr. JAMIE FORD (Author, "Hotel in the Corner of Bitter and Sweet"): Thanks for having me.

SIMON: If I could ask you to begin by reading a section that brings us back to the Seattle of 1942, wartime Seattle.

Mr. FORD: You got it. (Reading) The entire city came alive in the morning. Men in fish-stained T-shirts hauled crates of raw cod and buckets of geoduck clams, half-buried in ice. Henry walked by, listening to the men bark at each other in a Chinese dialect even he didn't understand. He continued west on Jackson Street, past a flower cart and a fortune teller selling lucky lottery numbers, instead of going east in the direction of the Chinese school that was only three blocks from the second-floor apartment he shared with his parents. His morning routine, walking upstream, brought him headlong into dozens of other kids his age, all of them going the opposite way. Bac weh, bac weh(ph), they shouted. But some just pointed and laughed. It meant white devil, a term usually reserved for Caucasians, and then only if they really deserved the verbal abuse.

A few kids took pity on him, though, those being his former classmates and one-time friends, kids he'd known since the first grade like Francis Long(ph) and Harold Chu(ph). They just called him Casper, after the friendly ghost. At least it wasn't Herman the Cat Nip or Baby Huey.

Maybe that's what this is for, Henry thought, looking at the ridiculous spot in the red. I'm Chinese. Thanks, dad. Why not just put a sign on my back that says, kick me, while you're at it?

SIMON: Your father actually wore a button like that, didn't he?

Mr. FORD: He did, when he was about 15, during the time shortly after the bombings of Pearl Harbor, and it was pretty common for a lot of the kids in the Chinese community to wear them. I remember him telling stories of kids throwing rocks at him and thinking that he was Japanese. It was sort of a badge of protection, if you will.

SIMON: One of the most arresting scenes in the book is when you describe the evacuation of Japanese-American families from Bainbridge Island.

Mr. FORD: At the time, it was a saw mill community and a farming community with a sizable Japanese population, but because it was self-contained and it was isolated, that was the first area that was evacuated. It was - you know, there was one bridge leading onto the island and then a ferry towards Seattle, so it was pretty easy for the Army to round everyone up, and it was almost an experiment in, was this feasible? How can we do this?

SIMON: Henry and a young woman from a Japanese-American family, whose name is Keiko, fall for each other. Very sweet, teenage romance in the days when teenage romances...

SIMON: Yeah. I was struck by that. They share a common passion, aside from the obvious, for music.

Mr. FORD: Yeah. And it's funny, it is a very sweet relationship. You know, they sort of meet and spend their time together on South Jackson Street, which was home to the Seattle jazz scene, which was kind of the heartbeat of West Coast jazz at the time.

SIMON: How did you find out about the Panama Hotel in Seattle?

Mr. FORD: I was actually doing research on another story, about a nightclub in Chinatown called the Wami(ph), which is where my grandparents met. And when I was doing a little research, there was a mention of the hotel. And it was just intriguing enough. It was one of those stories that, you know, kind of captured my imagination. And the more I learned, the more amazed I was that not only did the hotel exist but that in the basement, there really were the belongings of all these Japansese families that had been taken away. And those belongings remain to this day.

SIMON: You know, I'm afraid we need to explain how those belongings wound up there.

Mr. FORD: Sure. You know, the tragic part is that people in the Japanese community were given just a few days to pack up, and they could only take, really, what they could carry. So they either sold things that - pays on the dollar, or they stored things with friends or neighbors, in the basements of churches, or the basements of hotels like the Panama.

SIMON: At one point, when and Keiko and her Japanese family know that they have to evacuate and are given just a few days, she asks Henry to keep something for her. Her family is under curfew at that time.

Mr. FORD: Yeah. She asks him to keep her family photos. Again, this was just one of those things that you read and you ask yourself, you know, did this really happen? There were a lot of people that burned their own family photos if they had photos that they feared would connect them to the war in Japan, if they had photos of family members in traditional Japanese dressing or military uniforms. And so that does - that played a key role in the book.

SIMON: Henry and Keiko seal their love - and this is why I think it's such a sweet story, as opposed to other ways they could seal it - by buying a record. But even there, they run into prejudice.

Mr. FORD: There's sort of a lost jazz recording that is a central element in the story, and it's something that they share together. They share the music together, and then when this certain Seattle jazz performer - who actually is the only non-fictional character in the book, Oscar Holden - when he records a record and they buy that together, when they wander out of Chinatown and Japantown to this stalwart department store in Seattle, they're seen as outsiders. And racism can be subtle, and there's instances in the book where it's portrayed as such.

SIMON: And do you mind if we ask, how do you wind up with the name Ford?

Mr. FORD: My great grandfather was named Min Chung(ph), and he immigrated in the late 1800s to Tonopah, Nevada, where he worked for the Borax mining company, and he just adopted the name Ford. You know, the story, whether it's true or not, is that there was a sportsman, sort of an avid outdoorsman hunter that traveled through the area; his name was William Ford. And this man named Min Chung just took that name. It's kind of like an immigrant these days coming to United States and just deciding to call himself Chuck Norris. You know, it's sort of the most alpha-male, American name possible, and so he went by William Ford.

SIMON: Jamie Ford. His new novel is "Hotel on the Corner of Bitter and Sweet." Nice talking to you.

Mr. FORD: Thank you. It's been a pleasure. 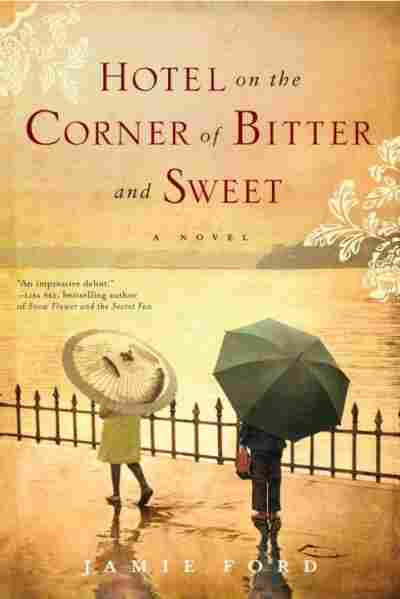