Accessibility links
Darwin, Britain's Hero, Is Still Controversial In U.S. Science long ago proclaimed Darwin's theory of evolution a winner. And in honor of his 200th birthday, England is issuing commemorative stamps, coins — even quilts — in honor of its hero. But in parts of the U.S., Darwin's theories remain socially controversial. 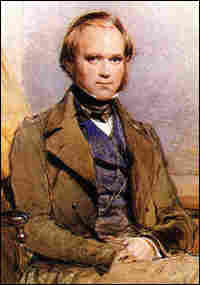 This portrait of Charles Darwin was painted by George Richmond in the late 1830s, around the time Darwin was fleshing out his theory of evolution. Creative Commons hide caption 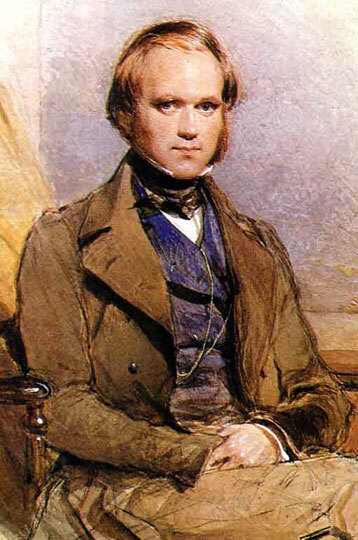 This portrait of Charles Darwin was painted by George Richmond in the late 1830s, around the time Darwin was fleshing out his theory of evolution. 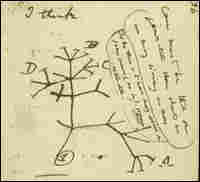 A simple sketch drawing from Darwin's 1837 notebook lays out his revolutionary idea: that a various species branch out — evolve — from a single common ancestor. The Complete Work of Charles Darwin Online hide caption 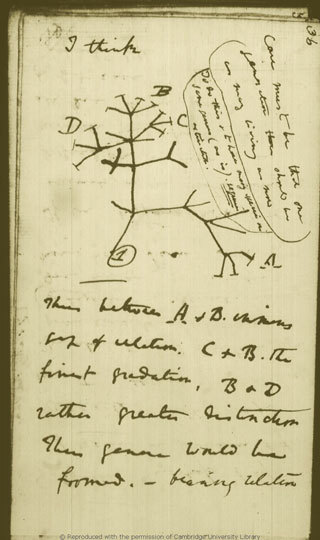 A simple sketch drawing from Darwin's 1837 notebook lays out his revolutionary idea: that a various species branch out — evolve — from a single common ancestor.

This year marks the 200th anniversary of Charles Darwin's birth, and to say Darwin mania is gripping England does not overstate the case.

The Royal Mint has created a Darwin coin, the Royal Mail has made a Darwin stamp set, and there are countless lectures and exhibitions throughout the country.

Bob Bloomfield is in charge of Darwin200, a program coordinating the celebration. He says there's even a group of knitters paying tribute to Darwin.

"The group created artistic knitted elements which are evocative of evolution processes," says Bloomfield. "Similarly there's a very small group also doing quilts which are doing a Bayeux tapestry of the Beagle voyage."

In other words, Darwin is not the controversial figure in the United Kingdom that he continues to be in the United States. Bloomfield says the reason for this is science has proved Darwin right.

"Unless you want to disregard the weight of evidence, there's not really a controversy," says Bloomfield. "Most difficulties come from people who have a fixed perspective on either the nature of time or either the created nature of the natural world."

But in Britain, even those who see the hand of a creator in the natural world don't have a problem with Darwin. The reason is that science and religion answer different questions, says the Right Rev. Lord Harries of Pentregarth, a member of the House of Lords and the former bishop of Oxford for the Church of England.

"Science is trying to address the question, 'How do things happen?'" says Harries. "In answer to that you get the theory of evolution. Things happen gradually over a very long period of time by natural causes. But if you ask 'Why did things happen?' Then you get a completely different answer."

It's the why of life that belongs in the spiritual domain. Harries believes the problems some religions have with Darwin and evolution come from a literal interpretation of the Bible. According to Harries, while the Bible contains profound truths, it is not word for word true.

"First of all, take the issue of the age of the Earth," says Harries. "Do people really think that the universe is only 4,000 years old when every science — chemistry, paleontology, physics, astronomy ... points to, with substantial evidence, to the Earth being billions of years old and the universe more than billions of years old. So you have to ask people, do you think that the vast majority of scientists ... are liars?"

The Rev. Malcolm Brown says the Church of England did have problems with Darwin's theory at first, but quickly realized it was not an attack on Christian faith. Nevertheless, by getting the first reaction wrong, "We legitimized, to some extent, later movements, particularly in the United States during the early 20th century, to raise creationism as an ideology and make Darwin a whipping boy."

The creationist ideology, now repackaged as a theory known as intelligent design, still runs strong in certain parts of America.

The University of Kansas in Lawrence actually has one of the 1,250 copies that make up the first edition of On the Origin of Species. But unlike in England, where it seems every scrap of Darwin memorabilia is on public display, this copy of the first edition stays mainly in the vault.

Leonard Krishtalka is a paleontologist and head of the natural history museum on campus. Krishtalka knows the book, with its notions about how life appeared on Earth, is threatening to some people. And even though Kansas has grabbed headlines with its fights over teaching intelligent design as an alternative to Darwin's theories in schools, it's not a problem unique to Kansas.

"There are actually 34 states in the United States that have passed anti-evolution laws of one kind or another," says Krishtalka, "whether it's stickers in textbooks or warnings that 'Reading this book with be injurious to your mental health," whether it's California or Alabama or Louisiana. For the record, in Kansas, the teaching of evolution in schools never stopped because all of the regulation and rules that the anti-evolution segment of the Kansas City Board of Education tried to get through were never enacted."

But the fight continues. It's not a scientific fight. Science has already proclaimed Darwin the winner. It's a social tug of war. A tug of war that started 150 ago and shows no signs of abating.

Head down into the University of Kansas vault to see its first edition copy of Darwin's On the Origin of Species.