Accessibility links
Iranian-American Professor's Story Of Revolution Afshin Matin-Asgari was born in Iran and came to the United States to go to a university. But when the revolution began, he went back home to join in the student protests. When he became disillusioned with the revolution, he returned to the U.S. and was prevented from going home for 18 years. He tells his story to NPR's Amy Walters. 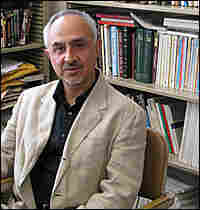 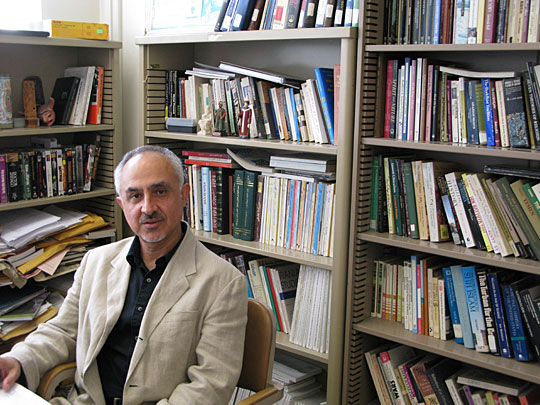 Afshin Matin-Asgari in his office at California State University at Los Angeles.

Born in Iran, Afshin Matin-Asgari was raised in a middle-class family. They were Muslim but not religious. He grew up during the rule of the shah and was anxious to leave his country.

"The shah, to us, was a despot," Matin-Asgari recalls. "There was a secret police. Everyone knew about that. I wanted to leave Iran and go to the U.S. and, specifically, come to Los Angeles."

But Matin-Asgari did not leave his politics at home. From the first week he landed, he was attending student meetings in opposition to the Shah of Iran. Along with the meetings, he filled his schedule with classes on revolution and political change, always thinking about his home country.

"I realized if it's happening, I might as well drop all of these courses and go back to Iran and join it," he says.

Matin-Asgari returned to Tehran, where, instead of meetings and political debates, he found himself shouting in sometimes violent street demonstrations. Only two months after his arrival, the shah fell. But even as his dreams of revolution came true, Matin-Asgari was having second thoughts about the direction his country was going.

"There was a clear attempt to silence people who did not agree with what was kind of becoming an Islamic movement led by Khomeini," he says.

Matin-Asgari was one of those people. He returned to Los Angeles to complete the degree he had started, but even the United states was not far enough. Former political allies threatened him by turning his name over to the Iranian authorities. Friends who shared his political views were both imprisoned and executed. Matin-Asgari had hoped to return to Iran after his education, but it became clear that would be too dangerous.

Eighteen years later, Matin-Asgari he did return, in time for his brother's wedding. Since that trip, he has returned once a year, every year. He is now a U.S. citizen and a professor of history at California State University, Los Angeles. He particularly enjoys teaching the history of Iran.