Mandell on Song of the Day 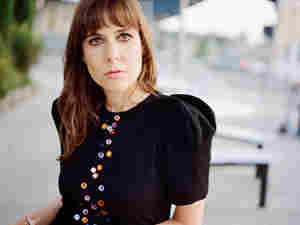 Born and raised in Los Angeles, Eleni Mandell culled much of her early inspiration from Tom Waits, X and others. Her latest CD, however, finds her style closer to singers like Feist and Jenny Lewis. Lauren Dukoff hide caption

With Valentine's Day approaching, there's still time to get into the spirit of hearts, flowers and love songs. Singer-songwriter Eleni Mandell's music, however, specializes in the other side of love — the disappointment and the heartbreak — with her sweetly dark tales of love lost.

In an interview with Morning Edition host Renee Montagne, the Los Angeles-based songwriter discusses sewing, her new album, and how she credits her sensibility to growing up in the Valley in the '70s and '80s.

Mandell's seventh full-length album, Artificial Fire, draws on her own hardships in love, as well as a phrase translated from English to French and back to English.

"I was in Montreal, and there were fireworks, and I asked my friend, 'How do you say that in French?' He said, 'Feu d'artifice.' I thought, 'Oh, how interesting — artificial fire.' That is kind of a perfect metaphor for another failed romance. I really love all these experiences that I've had, and I definitely haven't given up on love. I keep plugging away at it." 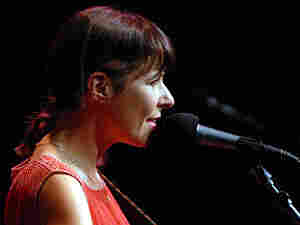 In addition to her solo work, Eleni Mandell sings in a rock band called The Grabs. Brian Blauser hide caption

Hailed by critics as an under-recognized talent for nearly a decade, Mandell has never broken through to mainstream commercial success. Yet she continues to record prodigiously, having put out six albums since 1999. Her varied influences — she calls X and Tom Waits early heroes, and has released a country album — shine through in her latest CD, Miracle of Five.