Accessibility links
Modern Music Sweep For Classical Grammys Classical icons such as Mozart, Tchaikovsky and Saint-Saëns got pushed aside at this year's Grammy Awards to make way for names such as Stucky, Schoenberg, Carter and Paulus. Hear some of the winning recordings.

Little Variations (3) for David, for piano 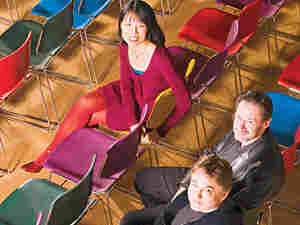 The Classical Grammys typically get sidelined at the awards telecast — no surprise.

But there was something new this year, if you take a look at the list of classical winners — not the performers who won, but the music they played.

In nearly all of the dozen or so classical-music categories, the Grammy-winning recordings were filled with music written within the last few decades. That means classical icons such as Mozart, Tchaikovsky and Saint-Saëns got pushed aside this year to make way for names like Stucky, Schoenberg, Carter and Paulus.

Has the Classical Grammy Awards turned its back on the bewigged masters of the past? Not necessarily, says Pierre Ruhe, classical-music critic of The Atlanta Journal-Constitution.

"Composers dead at least a century still rule in most concert halls and opera houses," Ruhe says. "But the Grammys typically reward what seems cool at the moment."

If there's any trend to watch, Ruhe says it may be the rise of interest in newer music in general.

"Contemporary music is finally starting to seem hip," Ruhe says. "It's still rather slight, but you can feel that cultural shift, and it should be very welcome even to people who adore Bach and Brahms and the old stuff."

One of the oldest Grammy winners this year, Kurt Weill's opera The Rise and Fall of the City of Mahagonny, was first staged in 1930. That seems positively ancient compared to Gloria Cheng's piano CD of music by Steven Stucky from 2002, and Esa-Pekka Salonen from 2005.

Even the choral category, typically dominated by centuries-old music, went modern. Last year, Brahms' German Requiem won; this year, it's Stravinsky's Symphony of Psalms from 1930. And in the small ensemble category, director Charles Bruffy led the Phoenix Chorale to a Grammy in pieces by Cecilia McDowall, born in 1951, and Stephen Paulus, who will turn 60 this year.

"John Corigliano's Bob Dylan piece and a very irreverent Kurt Weill opera — these works speak more directly to now. The surprise is that for so many years, the big Grammy awards seemed to go the ancient stuff."