Accessibility links
Fruit Fly Scientists Swatted Down Over 'Cheap Date' : Krulwich Wonders... When scientist discover something new, they sometimes get to name it. Scientists have labeled fruit fly genes things like "Cheap Date," and "I'm Not Dead Yet." But patients can take offense to this when they're diagnosed with having "Lunatic Fringe."

One of the privileges of being a scientist is that when you discover something new, you get to name it. And tradition says you can name it anything you want. 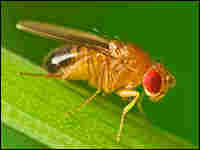 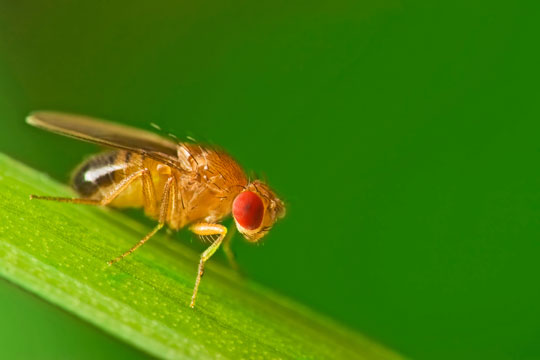 Fruit flies don't care if you call their genes "Lunatic Fringe" and "Sonic Hedgehog." Humans, however, tend to take offense.

Fruit flies, for example, are popular laboratory animals, and geneticists have been studying them for decades. When fruit fly geneticists find or create a gene variant that is new and different, they have a tradition -- some would call it a bad habit -- of having fun with the new name.

Take the official scientific name for the gene in a fruit fly that makes it hard to develop a heart. Well, somebody saw The Wizard of Oz, because the gene is called "Tinman," i.e., if it only had a heart.

And that's only the beginning.

A Glossary Of Fruit Fly Mutations

Here's a list of -- I kid you not -- real scientific names for fruit fly genes and the effects they produce:

Stranded At Second: A fruit fly that dies, usually in the second larval stage of development.

Agoraphobic: A fruit fly with larvae that look normal but never crawl out of the egg shell.

Groucho Marx: A fruit fly that produces an excess of facial bristles.

Out Cold: A fruit fly that loses coordination when the temperature drops.

Kenny: A fruit fly without this gene dies in two days, named for the South Park character who dies in each episode.

I'm Not Dead Yet (INDY): These fruit flies live longer than usual. This is from the Monty Python movie The Holy Grail, where a guy pushing a wheelbarrow calls out, "Bring out your dead," only to discover that one corpse is well enough to shout out, "I'm not dead yet!" over and over.

These names, concocted over the years by research scientists, have a scholarly benefit. Good jokes tend to stick in people's heads, so if a scientist happens to find a long-lived group of animals and also happens to remember that there's a longevity gene -- aka "I'm Not Dead Yet" -- in fruit flies, they can go to the computer, look up the fruit fly INDY gene and see if it turns up in their animal.

Genes in one creature often show up in others. Since Charles Darwin, scientists have understood that all living things are related by ancestry and by the busy flow of viruses and parasites moving across cell lines, so genes can sometimes travel from critter to critter, including from a fruit fly to a human.

But when human genes acquire fruit fly names, then these jokes become not so funny. So now, fruit fly geneticists are taking heat from their geneticist colleagues.

A few years ago, the Human Genome Organization Gene Nomenclature Committee, a fancy name for the folks who monitor gene names in humans, asked their members if they thought some fruit fly names were "inappropriate, demeaning and pejorative" to humans. According to the committee, most respondents said it would be OK to change some of those names to avoid embarrassing doctors and patients.

Dr. Murray Feingold, a Massachusetts clinician who treats people with genetic diseases, says, "People want to know [the names of their missing or defective] gene and what the problem is and how did it go wrong."

No Such Thing As An Inside Joke

Since it's increasingly likely some fruit fly genes will show up in humans, Feingold warns that it will not be possible for doctors to hide a scientific name like "I'm Not Dead Yet."

Patients these days can go on the Internet or to chat rooms, they can look at scientific literature, and they will see what the scientists are saying. A few years ago, those names were inside jokes. Now, says Feingold, "There is no such thing as inside jokes. The inside jokes are becoming outside jokes."

And for a doctor, he says, these names become embarrassing "when that gene becomes responsible for some kind of medical problem, and I have to tell that patient, 'Well, I'm sorry things don't look so good because you have [the] I'm Not Dead Yet gene.' "

Anticipating this problem, the nomenclature committee decided to change a few fruit fly names, which they can do because major scientific journals have apparently agreed to be ruled by the panel's decisions. The ban includes a number of mutant genes: "Lunatic Fringe," "Manic Fringe," "Radical Fringe" and "Sonic Hedgehog."

When NPR wrote the committee to ask what the new "Lunatic Fringe" gene would be called, then-chairwoman Dr. Elspeth Bruford wrote back, "It made sense to rename them on a functional -- if somewhat prosaic -- basis, e.g. LFNG O- fucosylpeptide 3-beta-N-acetylglucosaminyltransferase." The fruit fly geneticists find this new name something of a downer.

In our All Things Considered broadcast, Professor Jerry Coyne of the University of Chicago lays out the case for allowing a certain level of humor in the naming of genes. (Just click the listen button in the top left corner.) For decades now, these geneticists have been pioneering the discovery of new genes, and if "Shaven Baby" and "Killer of Prune" disappear from the scientific literature, "we'd still do our work and we'd still have fun," he says, "but something would have vanished from the culture."

More On The Discussion To Ban Offensive Gene Names
'Mutant Monikers: A Tale Of Freaky Flies And Gonzo Geneticists'