Accessibility links
Poll: Voters Down on GOP, Impatient with Congress The latest NPR poll finds President Bush's approval ratings remain dismal. But voters are equally disapproving of the Democrat-led Congress. On the issues, voters say Iraq remains a top concern, and a majority favor a hard stance on immigration.

Listen
Poll: Voters Down on GOP, Impatient with Congress 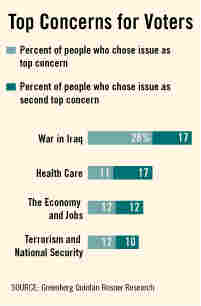 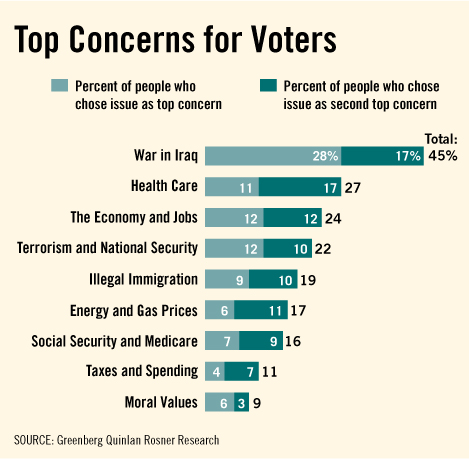 The poll was conducted for NPR April 26-29, 2007, by Greenberg Quinlan Rosner Research and Public Opinion Strategies. It consisted of a national telephone survey of 1,000 likely voters.

As the Democratic Congress and the Republican president struggle to come to some kind of compromise on Iraq and other issues, the political environment outside the Beltway continues to be as polarized as ever.

The latest survey by NPR's bipartisan polling team shows that the two parties' base voters — the ones most likely to vote in primaries — are so far apart that it may be much harder for their representatives in Washington, D.C., to come together.

Overall, the political landscape continues to tilt against the Republicans. The NPR survey found President Bush's approval rating remains low: 59 percent disapprove of his performance; only 37 percent approve. Since January, most national polls have found the president's approval rating consistently below 40 percent.

Bad News for the GOP — and the Democrats

Two-thirds of those surveyed think the country is on the wrong track. When asked whether they are paying more attention to the race for the Democratic presidential nomination or the Republican nomination, more voters say they are focusing on the Democrats.

That's yet another piece of bad news, according to Glen Bolger, the Republican half of NPR's polling team.

"The Democrats are, dare I say it, sexier right now to the voters than Republicans are," Bolger says. "There's a lot more interest in what's going on on the Democratic side than on the Republican side. The political environment continues to be terrible."

There is a bright spot for Republicans, although it comes in the form of schadenfreude.

Approval ratings for the new Democratic Congress aren't any better than they are for the president: 59 percent of respondents disapproved of Congress, while 35 percent approved.

Even Democrats who were polled, such as Kenneth Lawanis of Clairton, Penn., aren't happy. Lawanis says the new Congress is performing "terrible."

"They're talking up a good storm, but nothing's happening," Lawanis says. "I want to see them get something through, get some laws through."

Stan Greenberg, the Democratic half of NPR's polling team, agrees that this is a challenge for his party.

"Gridlock is one of the things people don't like," Greenberg says of voters. "People do want both parties to work together. The Democrats need to move from Iraq to making some progress on other issues."

But Iraq is overwhelming every other issue right now. When voters were asked what they saw as the most important issue facing the country, Iraq came out 20 points ahead of the next most important concern: health care.

NPR's poll also shows how both parties are being pulled farther apart by their base voters. A majority of Democratic primary voters — 55 percent — favor cutting funding and reducing troop levels immediately. Forty-two percent favor setting goals for a phased redeployment — the compromise position chosen by the Democratic leadership.

"That gives you a sense of the pressures that operate for Democrats as they address this issue," Greenberg says.

And that is why, after their first bill for a phased redeployment was vetoed, the Democrats are struggling to decide where to draw the line next on Iraq.

Republicans have a very different problem. On Iraq, their base is unified — 65 percent of Republican primary voters in NPR's survey said it was important to finish the job in Iraq. Only 29 percent said we should set deadlines for the Iraqis to meet specific political goals.

"What's interesting is that the Republicans are not fragmenting, and it's actually a problem," Greenberg says. "Within the Republican base, they are united behind the president. They strongly support his approach on the war. They are very out of touch with the country. But it means that you only get one Republican voting to override a presidential veto."

A Hard Stance on Immigration

When it comes to immigration — another big issue facing the new Congress and the president — it's the Republican base that has the biggest internal divisions.

Asked to choose between a guest-worker program, which the president supports, and deporting illegal immigrants, a majority of voters chose deportation.

"When I talk to members of Congress and senators about what they're hearing from the grassroots back home, they hear 'stay true on Iraq,' and they also hear 'hang tough on illegal immigration,'" Bolger says.

But immigration is also a difficult issue for the Democratic leadership in Congress. Like the president, the business community and their Hispanic constituents, Democrats favor an earned path to legalization.

But that's not where most voters stand. When given a choice, 57 percent of poll respondents favored requiring illegal immigrants to re-enter the country legally; only 39 percent favored a path to citizenship. Those numbers included a majority of both Democrats and independents.

Those are the kinds of numbers that explain why the Republican House abandoned the president's immigration approach last year — and why neither party may be willing to take a risk on the issue this year.