Accessibility links
Movie Review - 'Gomorrah': A Panoramic Picture of the Camorra Based on the best-selling expose that led to death threats for the author, Gomorrah delivers a big-picture view of a mafia machine — one that's thin on sympathy and heroism, but full of gritty realism.

'Gomorrah': A Panoramic Portrait Of Depravity

'Gomorrah': A Panoramic Portrait Of Depravity 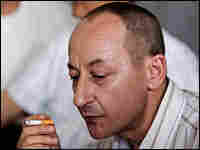 Renegade: Salvatore Cantalupo as Pasquale, a tailor who dares to buck the Camorra by exporting his expertise. Mario Spada/IFC Films hide caption

Renegade: Salvatore Cantalupo as Pasquale, a tailor who dares to buck the Camorra by exporting his expertise. 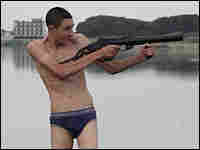 Ciro Petrone as Ciro and Marco Macor as Marco in Gomorrah

Gomorrah takes a long, hard, brutally objective look at the operations of the Camorra, a ruthless crime syndicate based in southern Italy. Adapted from a best-selling expose by Roberto Saviano, the film has been directed by Matteo Garrone with the Olympian detachment and sociological scope of a particularly cold-blooded 19th-century novel — or its 21st-century counterpart, HBO's meticulous urban procedural, The Wire.

Praise for Gomorrah has come hard and heavy; it opens in America following a triumphant tour of the festival circuit, including a Grand Prix at Cannes and a sweep of all the big prizes at the European Film Awards.

As a feat of docudrama verisimilitude, its virtuosity is unassailable. Garrone, backed by Saviano's research and the dexterous cinematography of Marco Onorato, sketches the texture, machinations and miseries of an entire culture with tremendous precision and confidence.

The trade-off for this hyperrealist, structurally nimble aesthetic is that while it makes for gripping viewing, Gomorrah engages the viewer in logical, systematic terms rather than personal, emotional ones. It's a grungy, cerebral saga, resolutely stripped of glamour and the operatic gestures of the mob-movie genre.

Heroism, catharsis and moral lessons are nowhere on the agenda; "Gomorrah" is passionately dispassionate. Garrone doesn't so much bring us into a story as engineer a diabolical machine, stand back, and let us contemplate its operation.

Utterly absorbing yet tricky to follow, the film condenses Saviano's exhaustively detailed book into a dense, elliptical narrative that skitters between interlocking stories. The machinations of mob middlemen parallel the initiation of two young aspiring thugs (Marco Macor and Ciro Petrone). An educated middle-class man (Carmine Paternoster) finds himself employed, with mounting anxiety, in a toxic waste management operation controlled by the Camorra. A tailor named Pasquale (Salvatore Cantalupo) risks his livelihood and his life exporting his Italian expertise to Camorra competitors in the Chinese garment industry.

Each of these plots speaks to the Camorra's stranglehold on every level of business and society, and each is given to sudden shocks — truly shocking — of violence. Outrage, of course, is implicit, and yet given the film's detached, God's-eye view of its horrors, we're never put in a position to mourn individual loss. It's the system, and systemic deprivation, that claims our attention.

And if Gomorrah impresses for its simultaneous restraint and sprawl, that same fractured coolness makes it a thing to admire more than embrace.

Faultlessly acted by a predominantly nonprofessional cast, the movie's most vivid character is its principal setting, a rotting, brutalist concrete housing monstrosity in Scampia, a suburb of Naples. Drugs are bought and sold with impunity; gangsters and their errand boys scamper ratlike through mazes of dingy hallways and desolate courtyards. It's like a crack-plagued project in an '80s American inner city, but set in the middle of a vast, beige nowhere.

As is to be expected, given Garrone's scrupulously unsensational methods, Gomorrah doesn't build to a climax so much as to a grimly entropic fade to black. It leads us to a void, marked by a series of titles enumerating the crimes wrought by Camorra, as well as their insidious global reach.

Their members have killed more than 4,000 people in 30 years. They are also shareholders in the reconstruction of the Twin Towers.