Accessibility links
Movie Review - 'The International': Breaking The Bad-Guy Bank Talk about your timely movie releases: In The International, the bank is the enemy. Clive Owen and Naomi Watts flit across continents in a frenzied, high-speed chase flick.

'The International': Breaking The Bad-Guy Bank

'The International': Breaking The Bad-Guy Bank 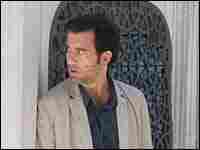 Man on the move: Clive Owen takes to the streets as an Interpol agent busting shady financial dealings.

Rated R for sequences of violence and language.

Not every movie lucks into the kind of timing that's allowing The International to advertise itself as "the perfect thriller for our time." But having made a bank their villain — a bank, mind you, not a banker — director Tom Tykwer and his screenwriters have pretty firmly captured the zeitgeist.

Of course, their movie trades in higher forms of finance than most of us find at our local ATMs. Tykwer prefers a less regulated sort that involves shootouts on rooftops and in art galleries, and that might interest a rugged Interpol agent played by Clive Owen. (Whose soulful, drizzly opening-shot close-up prompted a woman near me to mutter, "Clive Owen and rain ... this is already great.")

For those who appreciate eye-candy better when it's accompanied by a bit of narrative, there's a plot about brokering Third World weapons sales, a nicely understated supporting performance by Armin Mueller-Stahl as a former Stasi assassin, and much unnecessary but picturesque globe-trotting as our hunky Interpol agent teams up (for reasons of billing, I have to assume) with a New York assistant district attorney played by Naomi Watts.

A trip to Milan allows them to discover that facilitating the sale of arms is only a side issue for the fictional IBBC bank. The institution's real aim is to gain control of Third World debt, a goal that apparently requires the virtual dismantling — bullet-hole by bullet-hole — of New York's Guggenheim Museum. (Frank Lloyd Wright fans can relax; a life-sized replica of his ramped interior was built and then shot-up in a German factory.)

Tykwer being something of an architecture freak, controlling Third World debt also requires a trip to the rooftops of Istanbul, to Zaha Hadid's BMW factory (relocated from Wolfsburg to the base of a Mediterranean cliff), and to Daniel Libeskind's Jewish Museum in Berlin. All great fun in a story that's more kinetic than compelling.