Accessibility links
Retailer Turns To Bankruptcy To Stay Afloat Bowl & Board, a family-owned chain of housewares stores in New England, is trying to stay alive through bankruptcy protection. With the closure of its Brookline, Mass., location, the company hopes it can still keep its other locations going during these tough economic times. 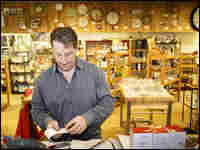 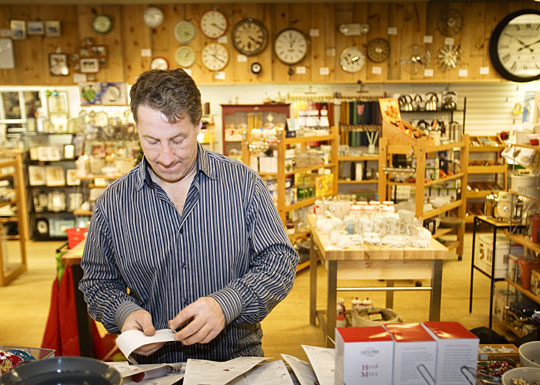 Read other stories from this series: 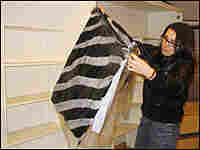 As the Bowl & Board store in Brookline prepares to close down for good, manager Mara Delarossa folds the last of the hundreds of shower curtains that once filled the shelves. Tovia Smith/NPR hide caption 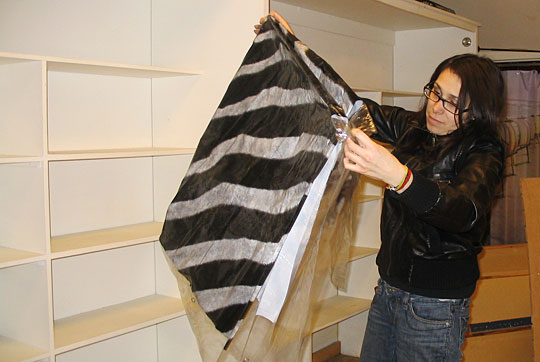 As the Bowl & Board store in Brookline prepares to close down for good, manager Mara Delarossa folds the last of the hundreds of shower curtains that once filled the shelves. 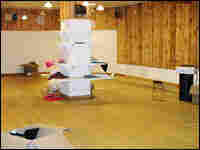 The Brookline Bowl & Board has been cleared of all merchandise; only the shelving and fixtures that Giarrusso built by hand remain. Giarrusso also paneled the walls himself, with rustic planks he painstakingly pried from the original Bowl & Board store in Cambridge. Tovia Smith/NPR hide caption 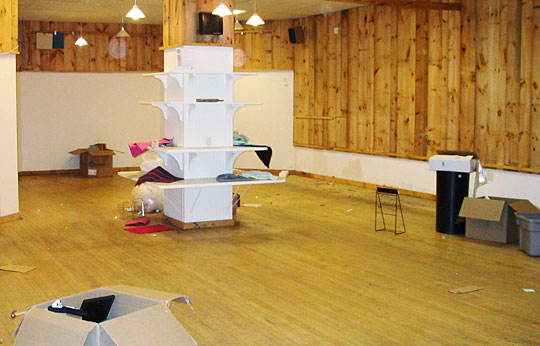 The Brookline Bowl & Board has been cleared of all merchandise; only the shelving and fixtures that Giarrusso built by hand remain. Giarrusso also paneled the walls himself, with rustic planks he painstakingly pried from the original Bowl & Board store in Cambridge.

NPR's Tovia Smith is following the economic fortunes of Bowl & Board, a family-owned chain of housewares stores in New England. This is her third story about the business.

Just about a week ago, Mark Giarrusso was still thinking he had things pretty much figured out. Yes, sales were too slow and rent was too high to make his store in Brookline, Mass., viable. But as Giarrusso puts it: "That's retail!"

Giarrusso runs Bowl & Board, a family-owned chain of housewares stores in New England. His other two stores in Somerville, Mass., and Providence, R.I., were still squeaking by. And even though Giarrusso had fallen six months behind in his Brookline rent, he thought that if his landlord would just cut him some slack, he could weather the storm.

But then everything changed when his landlord blindsided him with a lawsuit demanding Giarrusso pay all the back rent and seeking to freeze all of his bank accounts while the lawsuit is pending.

"[They're] putting me out of business with this," Giarrusso says.

Negotiating To Stay In Business

Determined to not let his Brookline store take his other two down with it, Giarrusso began a frantic negotiation with his landlord. He offered to pay most of the back rent immediately, if the landlord would let him off the hook for the 3 1/2 years remaining on the lease.

"If they do a deal, I can stay," Giarrusso says. "But if they are going to nail me for the remainder of the lease, it's kaputs."

After an agonizing wait, the landlord finally responded — and rejected Giarrusso's offer.

The landlord's lawyer had suggested the landlord could get more if Bowl & Board went bankrupt.

"It was a slap in the face," Giarrusso says.

Now furious and desperate for cash, Giarrusso called his Brookline staff and instructed them to get ready for a blowout sale.

"It's game over," he tells store manager Mara Delarossa. "We can't afford to stay any more."

At the store, everything is marked 75 percent off. Customers, looking for deals, try to haggle Giarrusso down even further. He needs the money to save his other two stores, but inside, Giarrusso says, it feels like a kick in the gut.

"It's frustrating. It makes me feel like being taken advantage of," he says.

"They are like vultures" Delarossa said. "It's kind of like buying a foreclosed house or something," she says. "Yeah, you're getting a really good deal. But it's someone else's loss."

Giarrusso's neighborhood of Coolidge Corner, the cultural and commercial heart of Brookline, is already dotted with dark storefronts.

"I worry about how many empty places there are now," says John Pergantis, who owns Party Favors, a bakery and gift shop next door to Bowl & Board. "It's a little scary. As you can tell, there is no one in here shopping."

Giarrusso also worries about the ripple effect on the hundreds of artisans he buys products from. "This is not stuff that came in a boat from some factory on the far side of the world. It's real people who put their heart into this," he says. "They've hand-carved it and hand-sanded it. And this is putting food on the table and getting them by the next couple months."

Perhaps what weighs the most on Giarrusso is that five Bowl & Board employees will lose their jobs.

"I don't know what I'm going to do," says Delarossa, who has been with the company for 10 years.

Sales clerk Cheryl Mahaffey adds, "You might see us at Starbucks. It's the best you can do in this economy."

Laying off his staff "is the hardest thing about this," Giarrusso says. "That's what keeps me up at night."

Finally, after resisting for a week, Giarrusso met with a bankruptcy attorney. "In my wildest dreams, I never thought I'd be here," Giarrusso says. "I was always taught that bankruptcy is not an option. It's a weak way out. I don't want to quit."

Giarrusso considers dipping into his personal retirement account to help his business stay alive. But then comes the final straw. Giarrusso learns his bank is about to recall his credit line. Giarrusso's bankruptcy lawyer says the storeowner is out of options.

Meanwhile, in Brookline, Bowl & Board's 75 percent-off sale has now become a sidewalk free-for-all. Customers rifle thru buckets of frames and candles and coffee scoops, grabbing everything they can.

"Is it OK to take the plastic buckets that the stuff was in?" asks one customer.

"Can I take the shelves?" inquires another.

After more than a week of agonizing about it, and after decades in his family business, Giarrusso reluctantly agrees to sign the papers, putting Bowl & Board into Chapter 11 bankruptcy protection.

Closing Up The Shop

Now, the store that took months to build out and fill up is stripped down and cleaned out in just hours. As Giarrusso carts his last remaining fixtures onto a rented truck, customers continue to wander through the open doors.

Giarrusso nods and turns his focus back to moving out.

"Just keep rifling all that stuff into the dumpster," he shouts out to one of his staffers.

Finally, exhausted, Giarrusso is ready to leave. He walks out the front door and turns the key for the last time.

"I fought hard for this place," he sighs. "Really hard."

He jumps in his truck and drives away. Now begins the fight for his other two stores, and Giarrusso is hoping that he'll do better, this time with the extra protection of Chapter 11.