Accessibility links
Valentine's Cupcakes From Nigella Lawson As Valentine's Day approaches, one person who doesn't get mushy about it is food writer Nigella Lawson. Still, she jumps at the chance to make her own cupcakes. "I think that adults have some sort of yearning for childish things, childish foods," Lawson notes. "And I don't mean that disparagingly." 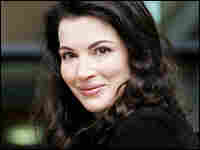 Valentine's Day is Saturday, but one person who doesn't get mushy about it is food writer Nigella Lawson. Asked for some sweet recipes, she was happy to oblige. First, she felt a need to be clear: This is not her favorite holiday.

It all started with Lawson's teenage days in boarding school. As she remembers it, "The competitiveness about Valentine's Day — and who has the most cards and so forth — means that the tension and stress never quite leave you."

So the young Nigella developed a "lofty detachment" from the holiday.

"However, it's only slightly serious," she told NPR's Renee Montagne. "Because if it's an excuse to cook something delicious, I'll take it gladly."

For instance, Lawson has embraced cupcakes — or as she calls them around Valentine's Day, love buns.

"I just had to call them love buns," she said. "For me, part of writing recipes is the joy of giving titles."

Lawson's love buns are "simply cupcakes with a sort of easy-whip meringue topping."

The topping is fairly simple: egg whites, sugar and corn syrup, along with a touch of salt and cream of tartar to help it maintain its shape.

After that is swirled atop the cupcakes, Lawson adds a gimmick: "these rather fantastic little heart-shaped sprinkles, which I let fall flutteringly onto the cloudy peaks. They almost look like prop cakes, they're so perfect."

And that perfection doesn't have to be stressful, she said.

Valentine's Day recipes "can get so fussy and fernickity," Lawson said, "that actually you do not feel loving toward your loved ones – you just feel vaguely hostile, that you've been doing something so complicated and challenging."

Instead, she recommends aiming for simpler, yet rewarding tasks, like making chocolate cherry cupcakes.

The assembly is easy, as all the ingredients are stirred together in a saucepan before being poured into a cupcake tin. And the recipe can use cherry jam or, even better, candied cherries.

"If you can get those candied cherries, that haven't been dyed rather an alarming bright red, and you can get the ones that are a natural dark red, you've got something rather sultry and enchanting, rather than cute."

And with a topping of heavy cream and bittersweet chocolate, the cupcakes can let anyone join in the recent surge in cupcakes' popularity.

"I think that adults have some sort of yearning for childish things, childish foods," Lawson said. "And I don't mean that disparagingly."

The little cakes, which can seem like they were made especially for one person, satisfy that desire, she said.

Lawson notes that cupcakes also have another advantage — they don't inspire quite as much fretting after you've gone and eaten an entire cake.

Reprinted from How to be a Domestic Goddess: Baking and the Art of Comfort Cooking. This recipe has not been tested by NPR.

These are very easy, very good — somehow light and dense at the same time — and I love their dark, glossy elegance. When I made them for the cake sale at my daughter's school fair, they sold, even at more than a dollar a piece, quicker than anything else.

The jam I use for these is a morello cherry preserve; if you're using a less elegant and probably sweeter confection, reduce the sugar in the cakes a little. And if you have any Kirsch about the place, then add a splash to the batter and icing.

Reprinted from Nigella Express: Good Food, Fast. This recipe has not been tested by NPR. 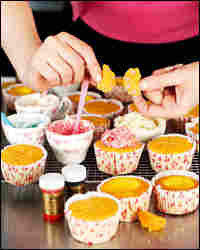 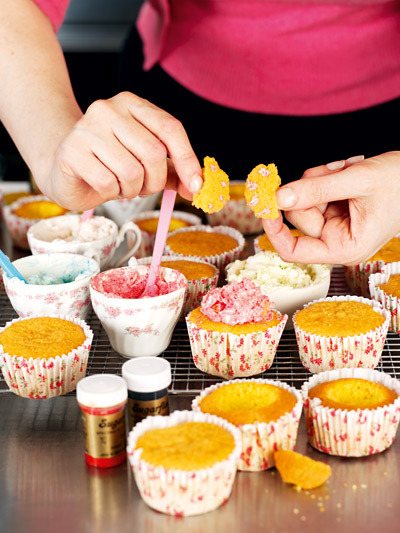 These were the first cakes I ever made as a child — little cupcakes with a disc gouged out of their pointy tops, cut in two, and the two pieces of cake top set in a blob of buttercream like a pair of butterfly wings.

I wasn't much good at making them look like butterflies then, and I see I haven't improved any. The ones here are more bunny buns than butterfly cakes, but they still make me feel strangely comforted. I say "strangely," as there is nothing comforting about the state of childhood. But then, the false solace gained from lying to yourself about the past is probably a necessary evil.

But what am I talking about? Just make the cakes. They're very easy. I whip cream with food coloring rather than making buttercream, and take great comfort in their pretty pastelness.

Reprinted from Feast: Food to Celebrate Life. This recipe has not been tested by NPR.

In another time I'd have been satisfied calling these Valentine's Day buns but, as the saying goes, if you're going to get wet, you may as well go swimming.