Accessibility links
Darwin's Theory: Too Big To Publish Imagine having a revolutionary idea, and then sitting on it for more than 20 years. That's what Charles Darwin did. His theory that nature — not God — was responsible for the marvelous variety of life on Earth was heretical. But then a young butterfly collector forced Darwin's hand. 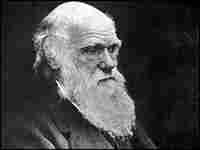 Charles Darwin receives much of the credit for the theory of evolution, but during his lifetime, he widely acknowledged that Alfred Russel Wallace had also independently come up with the theory. Creative Commons hide caption 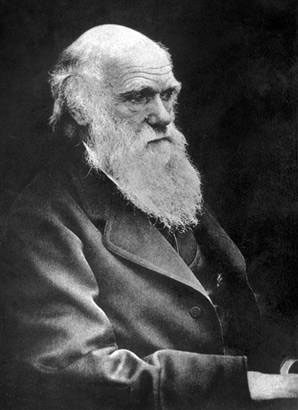 Charles Darwin receives much of the credit for the theory of evolution, but during his lifetime, he widely acknowledged that Alfred Russel Wallace had also independently come up with the theory. 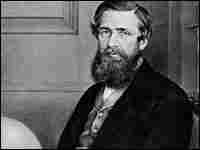 Alfred Russel Wallace, circa 1860, was a Welsh naturalist and explorer who, independently of Darwin, propounded the theory of evolution by natural selection. Hulton Archive/Getty Images hide caption 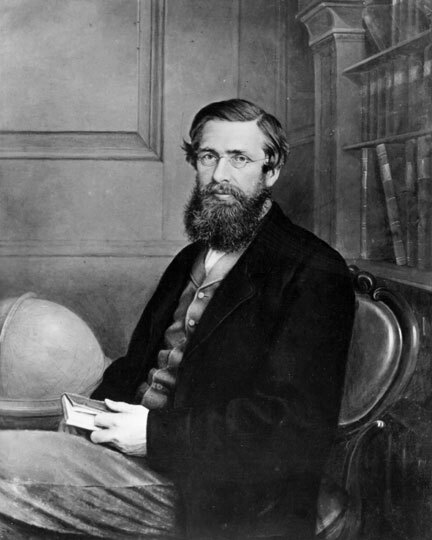 Alfred Russel Wallace, circa 1860, was a Welsh naturalist and explorer who, independently of Darwin, propounded the theory of evolution by natural selection.

Whose Theory Is It?

Joe Palca speaks with George Beccaloni of the Natural History Museum in London about who really deserves credit for the theory of evolution by natural selection.

In Victorian Times, Theory Credited To Both Darwin And Wallace

Imagine having a revolutionary idea, and keeping it to yourself for more than 20 years.

That's what Charles Darwin did with his theory of evolution by natural selection. The theory was announced publicly in a lecture at the Linnaean Society in London in 1858, and formally published in the famous book, On the Origin of Species, a year later. But Darwin began to form his theory in 1836.

Sean Carroll is a molecular biologist by training, but he's become a popularizer of the origins of the theory of evolution. On a visit to the Cambridge University Library, where many of Darwin's papers are stored, Carroll shows some of the key points in the evolution of Darwin's thinking.

First come notes from 1836 that the 27-year-old Darwin wrote on the way back to England aboard the HMS Beagle. Carroll says Darwin was writing about how the islands of the Galapagos each had a different kind of mockingbird.

Carroll points to one passage: "Here's the killer. 'If there is the slightest foundation for these remarks, the zoology of archipelagos will be well worth examining. For such facts would undermine the stability of species.' This is his first observation relating to understanding that species change."

Another key document is Notebook B. Written in 1837, when Darwin was back in England, it contains a sketch of a tree with branches from a central trunk, Darwin's tree of life. Carroll says this illustrates the radical idea that species evolved from earlier ancestors.

And then comes Notebook N. Here, Darwin is moving toward the idea that the forces of nature alone can shape species, and that biology is ruled by natural laws just as physics and astronomy are.

"We can allow satellites, planets, suns, universes, nay whole systems of universes to be governed by laws," Darwin writes, "but the smallest insect, we wish to be created at once by special act."

Carroll says that by putting an end to the notion that only a special act of a divine creator could be responsible for the marvelous variety of life on Earth, Darwin had come up with something that would be provocative, upsetting and heretical.

"He knows that everyone wants every being to be specially created," says Carroll. "This is what he's up against. The prevailing doctrine of special creation, that species are put instantaneously on the Earth in a particular place for a particular period of time, and not related, as he has deduced, by descent from ancestors."

Carroll says Darwin's ideas continued to evolve, and by 1844 he had written draft language that almost perfectly parallels what would be in On the Origin of Species 15 years later. But he was in no rush to publish; he knew he would take a lot of heat once his ideas were loosed upon the world.

Darwin had what you could call the luxury, says Carroll, "to let this gestate for 20 years and amass those facts. But, of course, every month he waited, there was a risk that someone else would come up with this idea."

And of course, someone did come up with the idea: Alfred Russel Wallace.

Wallace's notes and papers show he was thinking along identical lines to Darwin, albeit 20 years after Darwin's ideas began to coalesce.

"He was finding different species on different islands," Carroll says. "They were clearly related, because they were all birdwing butterflies.

"And what he was thinking was, gee, I'm finding these closely allied species near each other, so new species are evolving in the proximity of preexisting relatives. And it's really a parallel line of thought to what Darwin was thinking about in terms of finches and mockingbirds."

History has given most of the credit for the theory of evolution by natural selection to Darwin. Carroll says Wallace deserves better.

So be forewarned: We have 14 years to get ready for the 200th anniversary of Wallace's birth.

In some broadcasts, we referred to a page in Darwin's "original Notebook M." It was actually in Notebook N.