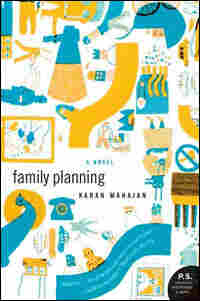 Karan Mahajan was born in Stamford, Conn., and grew up in New Delhi. hide caption 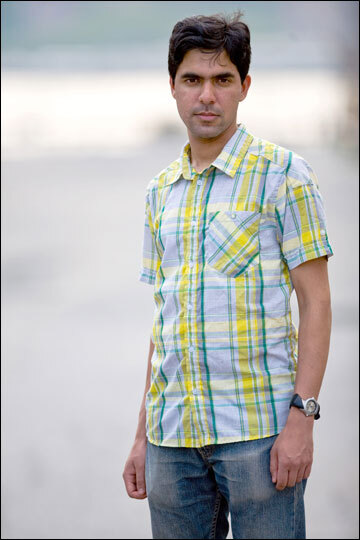 Karan Mahajan was born in Stamford, Conn., and grew up in New Delhi.

Most of us can't bear to think of our parents having sex. Yet our very existence is proof that they do, or at least once did.

Karan Mahajan's entertaining first novel, Family Planning, takes this conundrum as its starting point. Sixteen-year-old Arjun Ahuja, the oldest of 13 children, walks in on his parents while they're doing it on the nursery floor. Nothing about "Papa bubbling uncertainly beyond [Mama's] huge stomach" seems appealing. "Was this sex," Arjun wonders, "or — swimming?"

Confronting his father at the bus stop in their Delhi neighborhood the next morning, Arjun wants to know why his folks keep having babies (read the excerpt). Mr. Ahuja pretends that he believes it's his duty to help keep India's Hindu population up. He doesn't know how to tell his son the truth — that he wedded Mrs. Ahuja to spite his decorous, marriage-arranging parents, that he's only attracted to her when she's pregnant, and that she is his second wife, the first being Arjun's biological mother, who was killed in a car accident in America.

Mahajan, 24, reveals in his end notes that Family Planning "began with a question: What in the world would prompt a middle-class couple in contemporary, urban India to have a large family?" If the answer appears particular to this one family, the specificity of the Ahujas and their predicaments is intentional, a step away from what Mahajan sees as the trend in fiction from Indian authors writing in English. "I wanted my novel to generate all its heat internally through the frustrations of its characters and not with the aid of serious riots or political strikes or gangsters or fallouts of globalization," he explains.

The fall of Mr. Ahuja, the minister of urban development, may be a little small-time, but as his schemes and lies collapse, his trajectory mirrors that of the highway overpasses that he's pushed into construction throughout Delhi. Once favored, their purpose is increasingly unclear, their future in jeopardy. Arjun, meanwhile, expresses his contempt in that time-honored teenage tradition: by starting a (terrible) band.

The level of concision, insight and humor on display in Family Planning is rare from any writer, but particularly one so young. While the plot twists occasionally feel strained and the end comes a bit abruptly, in Mahajan's hands there is none of the bloating, trailing off, or elliptical indulgence that often characterizes first novels.

Obviously, Mr. Ahuja--Minister of Urban Development--couldn't tell his son that he was only attracted to Mrs. Ahuja when she was pregnant. That he liked the smooth, alien bulge of her stomach or the tripled heartbeat when they made love, silently, shifting over each other. That the faint fetal heartbeat ran under the speeding pulses of man and wife, calming him, holding him back from instant climax. Or even more fantastically, how, at times, he could imagine the unborn eyes of the fetus watching him, pleading for another sibling--begging, sobbing, moaning through the parched throat of his wife . . .

It was morning and Mr. Ahuja waited at the bus stop with his eldest son, Arjun. The sun swung over Delhi like a fiery wrecking ball, the entire city exploding with mirages and reflections that hurt the eye, Marutis and Toyotas and Ambassadors glittering by at top speed in their metallic finery. Clouds heaping in cumulus shelves overhead. The chalky pavements dizzying under eddies of dust. At least Mr. Ahuja was in the shade, under a tree, with Arjun. The middle-aged minister was becoming hard of hearing--the traffic on Modi Estate Road came to him like the indistinct whirr of a waterfall--but oh yes, he had heard Arjun's question. And the question was Papa, I don't understand--why do you and Mama keep having babies?

The boy had been as discreet as the bus stop would allow. He had waited for his other siblings--Rita, Sahil, Rahul, Varun, Tanya, Aneesha, Rishi--to leave. And then he had walked up to his Papa (Papa who insisted on seeing off the eight of his thirteen children who attended school every morning) and popped the question with the abruptness of a coin-toss in a cricket match. The words were said--Arjun turned away jauntily, thrust his fingers into his torn pockets, and scratched his hairy thigh. His white school pants were too short; they rode up around his ankles.

Now, both Mr. Ahuja and Arjun saw the Delhi Transport Corporation school bus floating on a cool mirage of leaking oil and blazing road. Time was running out.

In the end, all things considered, Mr. Ahuja decided he could not let the bus win. So he said, "Son, I told you about the Yograj Commission findings, correct? Then? You know I'm not a fanatic, but findings were hundred percent clear. We need more Hindus in India."

"So I'm--we're--just a political cause for you?" asked Arjun, twisting his neck to peer sidelong at his father.

"No, son. But you know how it is--these Muslims have so many wives, and their families keep growing, and what are we Hindus--"

"Do you even know my name?" Arjun asked.

With a tragic swing of the schoolbag, Arjun boarded the bus and was gone.

The bus accelerated heavily onto the road. The children leaned into the aisles; their water bottles swung in the air, briefly unanchored, sloshing. As Arjun scanned the lolling heads for a seat, he wished he had learned to mutter under his breath

(Goddamn politicians want goddamn Hindus goddamn fuck fuck). Then again, the skill was practically useless in his house where even the most regular conversation with his half--deaf Papa was--to Papa--a muttering under the breath. What luck, though: the only vacant seat was next to Aarti. She was a girl from the neighboring Convent of Jesus and Mary--a girl he liked enough to brave the usual heckling that burst from the back of the bus when he talked to a girl, even though he was sixteen. Today, the hecklers seemed hungover. Aarti closed the Pradeep's Physics Guide she was reading and they began talking. They talked about this, that, Bryan Adams, this, that, Bryan Adams's evergreen classic "Summer of '69," wasn't he wonderfully throaty, had she seen the new Bombay concert video, and what about that superb line when he said "Standing at your Mama's porch you told me it'd last forever it was the summer the summer of '69," what was he talking about, his lost childhood or his gained virility?

But really, Arjun wished he could tell her how he hated the daily morning bus-stop ritual, all eight kids trooped out onto the sidewalk by a man who couldn't hear anything, the eight kids now splitting into opposing factions and groups with the fickleness of politicians--each faction a campaign of shrill voices and stupid triumphs such as determining who could chuck Rita's water-bottle farthest across the road without cracking the windshield of a car--and all this ridiculous brouhaha expiring the minute the buses arrived and dragged the kicking, screaming mobs away. But the family was not a mob. The family was a solar system. The family had planets and satellites and the occasional baby that burned its way in like a mewling meteorite. As the oldest child by four years (the other children were separated by only nine to twelve months in age), Arjun had by now played every role in this evolving system: Pluto, the Sun, Jupiter, everything but a satellite, really. He replaced Mama as head-honcho when he was thirteen and she was recuperating from a difficult pregnancy, ten kids orbiting around him, tripping over their laces to get a piece of him, waiting for him to proclaim judgment on the crooked fixture of their ties--and now? Now he was Pluto again, cold, on the periphery, unimportant. He still had to read nursery rhymes to the four babies and soothe his pregnant mother by whistling filmi tunes, but otherwise he was trapped with twenty-four other probing eyes spinning around him--eyes that saw him only as a big threat to their personal nutrition at the dinner table.

Arjun was the biggest and ate the most. He had no privacy in the house and hated that. For instance: last night, for exactly 1.67 seconds, at 23:35 hours Indian Standard Time he had walked in on his parents doing it in the nursery. There in the cleft between the three cribs on the pinkish floor lay Mama on her back in a polka-dotted nighty, Papa bubbling uncertainly beyond her huge stomach, the papery jaws of his pajamas famished around his ankles. The four babies in their cribs were screaming; Mr. Ahuja twisted his head in panic; Arjun stumbled back into the corridor. The impression he retained was less a photograph and more a rash: the negative of his own skin blazed and exposed. Immediately, he was crazed with questions. How did Mama and Papa still have sex? How did their two lumpy bodies stack up, each one lost in the vast, flabby expanse of the other's skin?

He'd always imagined they had sex when all the children were at school.

Maybe they did, thought Arjun. Maybe they were at it again.

The thought annoyed him, and as revenge on his parents, he told Aarti on the bus: "Speaking of which--did I ever tell you about my band? We recently covered Bryan Adams songs. B-side sort of stuff, you know?"

"Yaah. You should come and watch us!"

They passed over a series of flyovers, and the driver heroically hastened the ancient bus down the slopes. These overpasses were Papa's concrete humps, Arjun realized. Flyovers were being constructed all over Delhi as part of Urban Development

Minister Ahuja's plans to rid the city of traffic lights and reinvigorate traffic flow: even now, a number of flyovers lay incomplete, their two rising slopes frozen in midair like tongues that failed to touch.

They arrived at school. "See you later, okay, bye!" he said, swiveling his heels toward the gates of St. Columba's, and she said nothing, only looked him in the eye, and that was a good sign, Arjun wanted to slap himself on the back, God, she was so pretty! With her slightly upturned nose and the way she pretended to be so interested in everything you said, the two dilating pools of her eyes so large and brown and patient! How she sat most days in the bus with her hair listing on her left shoulder, a notebook pushed out at right angles to ensure Arjun maximum readability (she liked playing noughts and crosses, Flame, Hangman, unabashed vestiges of junior school), the pen poised in his direction like a microphone, her bra strap straining through the tight fabric of her shirt--man. Her glances were like doodles--swift, often harmless, and entirely charming; every configuration of those eyebrows, mostly jesting, could distract Arjun from the distinguished antics of afternoon traffic. He feasted daily on her handwriting. He liked the sheer fatness of it. The sharp blue ink electrified around bulbs of white space. He could go for a spin in those letters.

But now the giant cross of the chapel loomed over him. He suddenly wished he hadn't lied to her about the rock band. But it had seemed like a good idea at the time. And, he supposed, it was the one thing his spying parents and siblings didn't know about him.

He was a rock star. 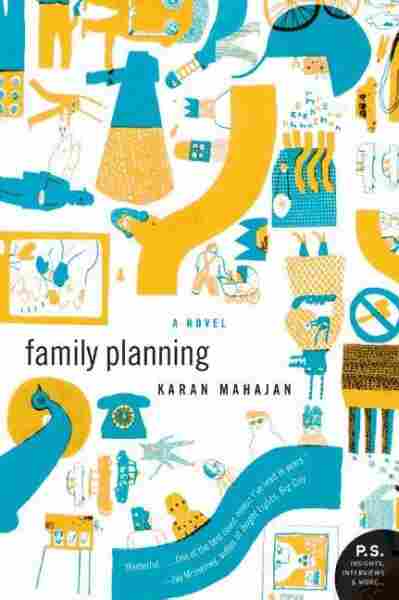