Accessibility links
Expert: Few Clues On How Banks Used TARP Funds Bank CEOs were grilled Wednesday on how they spent the funds from the Troubled Assets Relief Program. Elizabeth Warren, chair of the TARP's Congressional Oversight Panel, says it is hard to say how the money was spent because the Treasury handed it out without preconditions.

Bank CEOs were grilled Wednesday on how they spent the funds from the Troubled Assets Relief Program. Elizabeth Warren, chair of the TARP's Congressional Oversight Panel, says it is hard to say how the money was spent because the Treasury handed it out without preconditions.

A little more now on how the TARP funds have been spent so far - that's the Troubled Asset Relief Program. Elizabeth Warren has been keeping tabs on the money in a role as chair of the TARP's Congressional Oversight Panel. Elizabeth Warren is also a professor at the Harvard Law School. So, what has she found?

Professor ELIZABETH WARREN (TARP Congressional Oversight Panel Chair): We haven't been able to discern how it was spent, and the main reason we haven't is that Treasury handed out the money without saying, and you've got to tell us what you're going to do with it and give us some measures for telling whether or not you actually did what you said. So, you know, if you don't ask, you don't get an answer.

BLOCK: Now, Congressman Gary Ackerman of New York in grilling these eight CEOs today asked all of them to provide a written report detailing how they've spent this first installment of the TARP funds. Are you confident that that's going to happen?

Prof. WARREN: You know, when Congress asks a question, I assume that every banker remembers Congress will ultimately write the rules. Not only the rules today, but all the rules going forward, under which the bankers will operate. Surely, no bank would have the nerve not to give a fairly detailed report to Congress when asked directly.

BLOCK: Now, the Oversight Panel issued its own report, and you found, or you suggest that the federal government paid too much for some of the TARP investments. Some of this is very, very complicated, but I want you to try to briefly explain how and why that happened.

Prof. WARREN: At the time that we made these first big purchases, about $254 billion, the Secretary Paulson described it as, we're investing in these banks, and we'll be taking back stock and warrants that are worth about the same amount as the amount we're putting in. In other words, we're not going to lose anything on the deal. In fact, he said, we might make some money. So, the Congressional Oversight Panel asked him specifically about the terms of the deal and essentially said, are we getting our money's worth?

He wrote me back on December 30th and he said yes, these are par transactions, which means, in effect, for every $100 that the government puts in, they got back $100 worth of stock and warrants. So, you say, hey, that sounds pretty fair. Now, we could've stopped there, but we decided, you know, maybe we should make an independent investigation. So, we got together some really terrific people, experts and basically what they found was in this first go-around that for every $100 that the government put in, we got back about $66 worth of stock. You do that enough times and that adds up to a shortfall of about $78 billion.

Prof. WARREN: You know, I don't know which one would make me more upset, that he spent that kind of money without knowing that for every $3 that were going out that he was only getting $2 worth of value back, or that he knew it and was not forthcoming with the American people about it.

BLOCK: What actually needs to happen to create more transparency to make sure that tax dollars are spent wisely?

Prof. WARREN: Well, you know, there are really three parts here. When we talk about transparency, you can think of that in a very technical way. And what it really means is put the documents on the Web site, let everybody see the numbers. You can talk about it in a more strategic way. Let everyone see the decision-making process. How it is that this bank got this amount of money and how another bank got a different amount of money.

But what our most recent interactions with the former Secretary of the Treasury Paulson suggest is that a key part of transparency is a clearly articulated and honest plan for how we're spending money and how we think that's going to pull this economy out of the ditch.

BLOCK: Did you hear that either from Timothy Geithner or from President Obama yesterday?

Prof. WARREN: Not yet. You know, the good news is they indicate that they understand that the American people want to know what's going on and feel pretty angry about not having someone be entirely forthcoming with them, but we have to wait and see what the details are.

BLOCK: Professor Warren, thanks so much.

BLOCK: Elizabeth Warren is the chairwoman of the Troubled Asset Relief Program's Congressional Oversight Panel. She is also a professor at Harvard University. 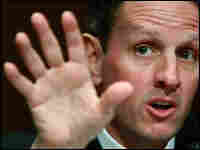 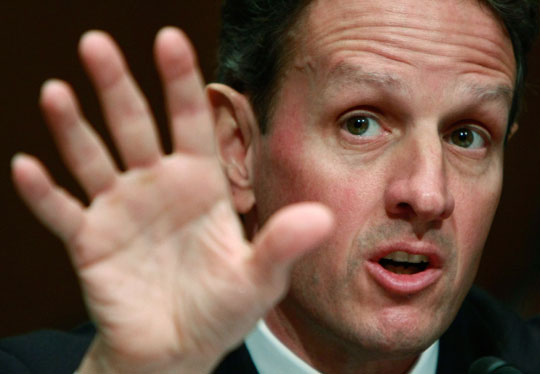 CEOs of the nation's largest banks and financial institutions faced a congressional gantlet on Wednesday, testifying in their own defense about how they spent $176 billion in taxpayer bailout money.

Lawmakers wanted to know where the money went and why it hasn't resulted in more lending to middle-class Americans.

Members of the House Financial Services Committee also demanded an explanation for billions of dollars in executive bonuses and employee junkets that came just as some of the banks — burdened by sour mortgages — received disbursements from the $700 billion Troubled Assets Relief Program, known as TARP.

Committee Chairman Barney Frank (D-MA) warned the bank executives of "a great deal of anger" across the country. He said Congress faces "a dilemma" because lawmakers must help some of the same people whose bad lending practices sent the economy spiraling into reverse.

"I urge you going forward to be ungrudgingly cooperative," Frank told the gathered witnesses. "There has to be a sense of the American people that you understand their anger ... and that you're willing to make some sacrifices."

The image of the banks has taken a beating in recent weeks because of reports that Wall Street firms had doled out more than $18 billion in bonuses to their employees last year. Goldman Sachs and Wells Fargo also had set conferences in Las Vegas but later, under scrutiny, changed their plans.

No 'Golden Parachutes' At Goldman

The first witness, Lloyd Blankfein, chairman and chief executive officer of Goldman Sachs, outlined the $13 billion in new financing he said was made by Goldman after it received $10 billion in TARP money. But he was careful to sound a note of contrition.

"Many people believe — and, in many cases, justifiably so — that Wall Street lost sight of its larger public obligations and allowed certain trends and practices to undermine the financial system's stability," Blankfein said.

He also emphasized that Goldman Sachs "never had golden parachutes ... for its executives."

JPMorgan Chase CEO Jamie Dimon said emphatically that his firm was lending. He endorsed a "systemic risk regulator" to help oversee U.S. markets, a move he says "would allow us to begin to address some of the underlying weaknesses in our system and fill the gaps in regulation."

"We stand ready to work with you on the range of issues confronting the financial services sector and our economy," Dimon said.

Citigroup CEO Vikram Pandit said he has told his company's board to limit his salary to $1 per year with no bonus "until the situation improves."

"I know we are in a new reality," Pandit said, adding that he wanted Congress to know that "I get the new reality and I will make sure Citi gets it too."

Current salaries for the assembled CEOs ranged from $600,000 to $1.5 million per year, not including any bonuses.

Many of the executives stressed that the firms they represent accepted the TARP money only at the urging of the government. They also were quick to say that none of the government's money went to bonuses or dividends.

Those involved in real estate lending said they had done their best to help troubled homeowners avoid losing their homes.

Pandit cited the social stigma attached to foreclosure as a reason that so many people had not tried to work out bad mortgages until it was too late.

"Half the foreclosures we handle come from people we've never talked to," he said.

The executives were asked whether they thought massive credit card losses were likely in the next year.

"Clearly, this is going to be an awful year for the credit card industry," Bank of America CEO Kenneth Lewis said. He cited "optimistic" projections of unemployment at 8 or 8.5 percent "that would cause a very high — very high loss rate in ... credit card portfolios."

Meanwhile, Treasury Secretary Timothy Geithner also got an earful from lawmakers who are skeptical of a plan he outlined on Tuesday to redirect the financial rescue.

Geithner proposed a $2 trillion infusion into the banking system to buy up bad assets, restore credit and revive lending at lower mortgage rates.

"We are going to bring together the government agencies with authority over our nation's major banks and initiate a more consistent, realistic and forward-looking assessment about the risk on balance sheets," Geithner told the Senate Budget Committee.

He said a request for further funds beyond the original $700 bailout program was possible.

That did not satisfy Sen. Lindsey Graham (R-SC), who said: "So you have no clue. Why not just ask for more? We know you will."

At a White House briefing, press secretary Robert Gibbs defended Geithner's plan and brushed aside the Dow's 381-point drop on Tuesday, when the Treasury secretary's plan was unveiled.

Gibbs said the financial rescue was not designed to effect "a one-day market reaction."

The plan, he said, "addresses not simply the needs of banks but also the financial system in general, as well as the needed access to capital by America's businesses and families."

Meanwhile, New York Attorney General Andrew Cuomo, in a letter to Rep. Frank, accuses Merrill Lynch executives of corporate irresponsibility for secretly and prematurely awarding $3.6 billion in bonuses as taxpayers were bailing out the industry.