Accessibility links
Lang Lang's Journey to Beethoven Chinese pianist Lang Lang is one of the biggest sensations in classical music. He discovered his love for music as a kid, while watching a cat play the piano in a Tom & Jerry cartoon. Today he releases his first-ever Beethoven recording.

Lang Lang in concert in NPR's Studio 4-A: Music by Haydn, Scriabin and Balakirev. 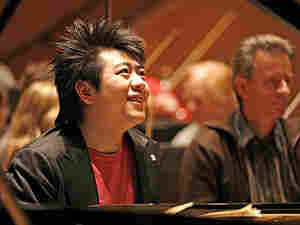 Lang Lang has waited for just the right moment to record the music of Beethoven. Steven Haberland hide caption

One of the biggest sensations in classical music today is Chinese pianist Lang Lang. He came to love the piano in a surprising way. When he was barely more than a toddler, he became obsessed with a Tom & Jerry cartoon in which Tom the cat pounds out a Hungarian Rhapsody by Liszt, with paws flying in all directions. Lang Lang wanted to play as fast as that cat could. Now at age 24, Lang Lang still likes to play the piece.

Lang Lang got his big break in 1999. He was 17 when he was asked to fill in at the last minute for veteran pianist Andre Watts. The unknown Chinese teenager played Tchaikovsky's Piano Concerto with the Chicago Symphony Orchestra. It was a performance grand enough to launch his career.

Since then, Lang Lang has conquered the classical world with dazzling technique and charisma. Sometimes, as his fingers plunge into the final chord, he leaps to his feet. Some critics wonder whether he's overdoing it — but audiences go wild.

And now Lang Lang is out to conquer Beethoven. His first ever Beethoven record, The Piano Concertos 1 & 4, is released today. The music is virtuosic, but it requires more than just muscle. It's an intricate give-and-take between piano and orchestra.

Lang Lang's concert calendar is booked through 2010, he has a major record contract (rare in the world of classical music), and he practices on an old piano that once belonged to his idol, Vladimir Horowitz. Not bad for a career that started with a Tom & Jerry cartoon.

Lang Lang, Live in Studio 4A

Lang Lang, Live in Studio 4A

One reviewer said of a recent Lang Lang recital: "He created such a gut-level excitement that the audience responded with almost primitive intensity."

He's making his first appearance at the Kennedy Center in Washington, D.C., where he'll perform the world premiere of Eight Memories in Water Color by Chinese composer Tan Dun.

Tan Dun rose to international fame after winning an Academy Award in 2001 for his score to the mystical martial arts film, Crouching Tiger, Hidden Dragon.

Lang Lang started on the piano at age 3, and held his first concert at age 5 in northern China. He came to the U.S. six years ago, and has become something of a phenomenon. His parents supported his music career from the beginning, and father and son moved to Philadelphia in Lang Lang's mid-teens so he could continue his studies with some of the world's best tutors.

His big break came at 15, when he amazed audiences at the Ravinia Festival's Gala of the Century in August 1999. Pianist Andre Watts fell ill and Lang Lang was asked to step in at the last minute.

Lang Lang is well known for his technical skill, but also for his dramatic presentation. He plays with an almost unbridled energy and intensity.