Accessibility links
Scientists Finish First Draft Of Neanderthal Genome Researchers in Germany say they have drawn up a map of about 60 percent of the genetic "letters" in the genome of Neanderthals. The map is expected to help reveal what genetic differences allowed humans to leave Neanderthals in the evolutionary dust. 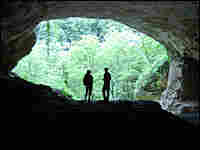 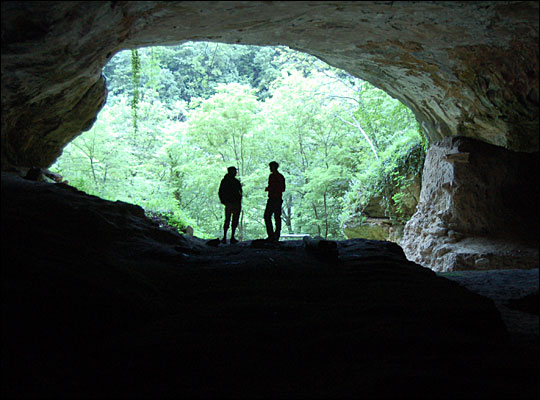 Max Planck researchers spent more than two years studying a bone fragment from a fossilized Neanderthal skeleton found in the Vindija Cave in Croatia to complete the new gene map.

Scientists in Germany say they have drawn up a map of about 60 percent of the genetic "letters" in the genome of Neanderthals. The map is expected to shed light not only on what kind of creatures they were, but also what genetic differences allowed humans to leave Neanderthals in the evolutionary dust.

Neanderthals are generally considered to come from the shallow end of the Homo gene pool — an evolutionary experiment that split off from the lineage that led to modern humans and then gave up the ghost about 30,000 years ago.

The new gene map, which is the result of two and a half years spent analyzing a tiny fragment of Neanderthal bone from Croatia, suggests that humans and Neanderthals began to diverge genetically from a common ancestor about 800,000 years ago. The two populations co-existed but were genetically distinct by 300,000 years ago, according to the scientists.

Biologist Svante Paabo led the research team at the Max Planck Institute in Leipzig, Germany. "What we can now do is look at all those genetic changes on the lineage to us, and divide them up among those that happened before we diverged from Neanderthals and those that happened after," Paabo says.

Because Neanderthals were our closest relative during our evolutionary journey, differences between human and Neanderthal genetics could tell us what genes made us distinctly human. Rick Potts, head of the Human Origins Program at the Smithsonian Institution, says scientists will want to look especially hard at genes from the two species that affect brain function.

"Did they think differently?" Potts says. "The parts of the brain that are associated with social life in humans' social interaction — were they different from modern humans?"

Already, the Max Planck team has found signs of two genes that Neanderthals and modern humans might have shared: one that's thought to confer language ability, and another that makes adults unable to digest lactose in milk.

One controversial hypothesis about the two species that has not, so far, been illuminated by the gene map is if humans and Neanderthals ever interbred.

The scientists announced their findings at a meeting in Chicago of the American Association for the Advancement of Science, and plan to submit them to a scientific journal in the near future.