Accessibility links
Building The Curious Faces Of 'Benjamin Button' Effects-driven acting? Actor-fueled effects? The line between performance and technology has rarely been thinner than in The Curious Case of Benjamin Button. Laura Sydell goes behind the scenes with the FX gurus who helped make it happen. 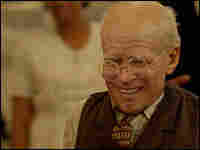 In nearly a third of his scenes, Pitt's expressions were digitally mapped, then recreated and imposed over the faces of other actors. hide caption 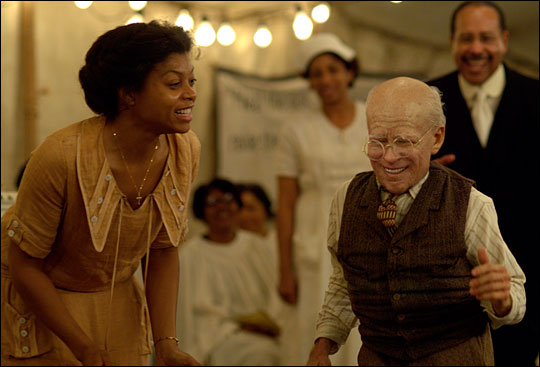 In nearly a third of his scenes, Pitt's expressions were digitally mapped, then recreated and imposed over the faces of other actors. 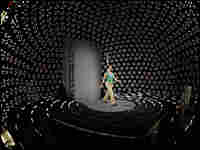 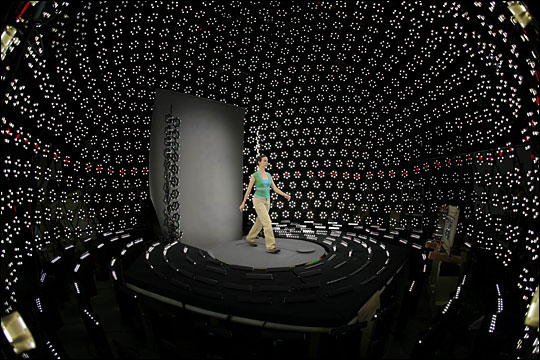 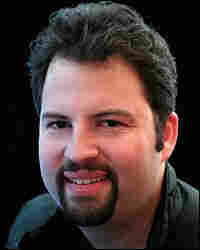 Paul Debevec — who worked on the digital technology used in Benjamin Button — lit his head shot using one of the institute's lighting stages. hide caption 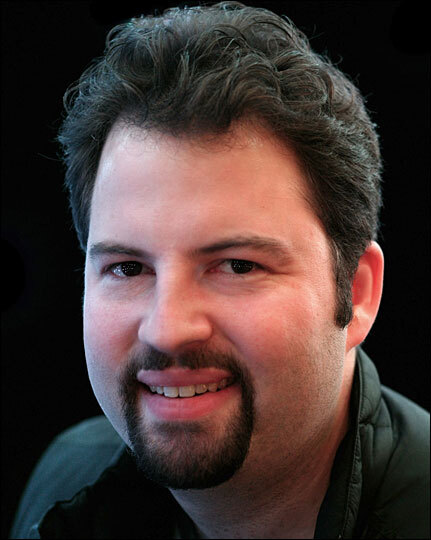 Paul Debevec — who worked on the digital technology used in Benjamin Button — lit his head shot using one of the institute's lighting stages.

When a temperamental actress threatens to sink his film project, Al Pacino's movie director creates a replacement from his imagination -- and some computer code.

Are Real Actors A Headache?

'I Have Re-Created The Infinite Nuances Of A Human Being'

'A Star Is Digitized'

The Curious Case of Benjamin Button, a film based loosely on an F. Scott Fitzgerald short story, stars Brad Pitt as a person who is born old and ages backward. The movie has generated rave reviews and earned 13 Oscar nominations — more than any other film this year — including a nod for special effects and another for best actor.

In the case of Benjamin Button, acting and special effects seem to be related: Pitt couldn't have done the film without the movie's breakthrough technology, and the effects wouldn't be the same without Pitt.

To make Benjamin Button, special effects experts needed to put the head of an aged-looking Pitt on a child's body for the first third of the movie. The results look just like Pitt — only it isn't.

"There's 325 shots — 52 minutes of the film — where there is no actual footage of Brad," says Steve Preeg, a character supervisor at Digital Domain, the studio that did all the special effects for the film. "He's not in any of the shots."

But even if it's not Pitt's actual head we're seeing, Digital Domain's executive producer of visual effects, Ed Ulbrich, says the performance is still his. Take the scene where the still-old Benjamin visits a faith healer in a church and gets out of his wheelchair and walks. Ulbrich says Pitt made choices as an actor that no animator would have thought of doing.

"He ends up getting this kind of crazy kind of Popeye look on his face, and he's just thrilled," says Ulbrich. "I don't think that it's something that any of us would have thought of had Brad not done that."

The challenge in creating Benjamin Button was to cross what Japanese roboticist Masahiro Mori called the "uncanny valley" — the creepy nether-region that's home to robots and computer-generated characters who get really close to looking human, but don't go all the way.

Digital Domain's Preeg says the uncanny valley explains why zombies wig people out: "Even though they are a lot closer to humans than a primitive robot, people react better to the primitive robot and would rather have that around than a zombie in the house."

Hence, it's easier for Pixar to make a cuddly robot named Wall-E than it is for Digital Domain to make a believably human reproduction of Brad Pitt.

Preeg says the studio knew they couldn't get anything wrong — not a dimple, not a wry smile, not a crease in the forehead — or they were in zombie land.

"We had a hard time hiring people for this show, because everyone thought we were going to fail," says Preeg. "No one wanted to be associated with a project where we made Brad Pitt look creepy and a $150 million movie goes down the toilet because we made a zombie Brad."

But now that Digital Domain has crossed to the other side of the uncanny valley, much more may be possible: "The genie is out of the bottle," says University of Southern California Graphics Lab associate director Paul Debevec.

Debevec helped develop some of the technology that made Benjamin Button possible and, he says, he already knows of projects in the works that will move the technology forward.

"It's just a matter of a couple more film projects coming through that really refine the technologies," he says.

The movements of animated characters are already derived from those of non-actors; Betsy Paterson, an animation supervisor with Rhythm and Hues whose film credits include Garfield: A Tale of Two Kitties, says animators often use themselves as models.

"When you walk into a room of animators, you will notice that they all have mirrors right next to their computers," says Paterson. "So that as they're working, they kind of make faces and kind of try to figure out what is that essential thing that really gives ... the feeling of the mood or attitude that [they] are trying to convey."

Given the long history of demanding, egotistical movie stars, there's no reason to think that Hollywood won't take advantage of the new technology to cut the big names out of the picture. There's even been a movie about it. It's called Simone, and it stars Al Pacino as a director whose film is destroyed when a demanding actress walks off the set. In response, Pacino's character uses technology to forge a star from the ideas in his own imagination, announcing in one scene: "I have re-created the infinite nuances of a human being, a human soul."

Well, not so fast: It may be harder than you think to re-create the sultry beauty of a Greta Garbo, the brooding presence of a Marlon Brando or even the winning smile of a Brad Pitt. UCLA acting professor Judith Moreland says real actors have an ineffable quality that isn't easily re-created.

Moreland points to a scene in the movie Michael Clayton, staring George Clooney. At the very end of the film, after Clayton has seen his whole world fall apart, he gets into a cab and tells the driver to just drive. For two minutes, as the credits roll, we watch Clooney's face as his eyes dart across the streets of New York and he takes a few deep breaths.

"We were enthralled by him," says Moreland, "wondering 'What is he thinking?', or 'I bet he's thinking about this,' or 'Look how he's sifting through all this information.' "

The key, says Moreland, is in the eyes: "I still think that there is something about actually looking at a human being and seeing something real look back at you ... it's about that human connection."

In fact, animators say it is the eyes that are the biggest challenge. Still, now that they've done what was once considered impossible, it's hard to believe that they aren't going to try and breathe life into an entirely computer generated person.

Off The Grid: See How Brad Pitt's Digitized 'Benjamin Button' Performance Came About