Accessibility links
The Magic Of Letters Chameli Waiba was raised in a village in Nepal and didn't attend school as a child. When she finally learned to read as an adult, Waiba discovered the power words could have to change her life, as well as the lives of others in her rural community.

Listen
The Magic Of Letters

Read in English by Ramyata Limbu 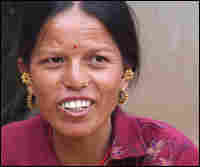 Chameli Waiba lives in Makwanpur, a village in rural Nepal. She was a child bride at 15 and didn't learn to read until she was 21. Waiba works for social causes, environmental conservation, road construction, child development and microfinance. Courtesy of Madhu Acharya hide caption 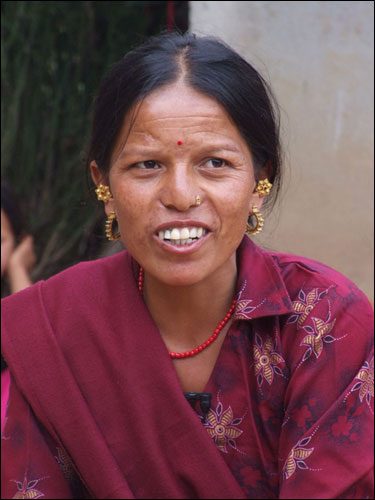 Chameli Waiba lives in Makwanpur, a village in rural Nepal. She was a child bride at 15 and didn't learn to read until she was 21. Waiba works for social causes, environmental conservation, road construction, child development and microfinance.

Mero Jindagi: 'This I Believe' In Nepal
See a video of Chameli (Requires Real Player)

I believe in the alphabet, because it has the power to change life.

I realized the power concealed in the alphabet on the very first day I joined the adult literacy class. For the first time, I was introduced to letters that stood for my name. In discovering the Nepali alphabet, I discovered I was Cha-me-li and not Cha-mi-li, as everyone used to call me. It felt like magic. A little loop of "e" for "i" changed my name!

If three letters could change my name, how much would I be able to transform my life if I understood all the letters? I spent that whole evening writing and rewriting my name. After that, I carried the spelling book with me while I went to collect firewood, weed the maize field, just everywhere, until I learned to write.

Before learning how to write, my life was like the nearby Indrasarovar Lake, always stagnant. I had the pain of child marriage, my husband did not support me, abject poverty was my way of life and I didn't have any skill or courage to do anything. But I saw that the number of people learning to read and write was growing — and their lives were improving. I then realized it was neither wealth nor beauty that I lacked, but letters.

As my new knowledge of words boosted my confidence and courage, I made a resolution: Yes, my life has been like this, but I and my sisters and brothers should be given education, as much as we would like.

The immediate obstacle to this was the Tasar River. The village school was on the other side of the river and children would be cut off from going to school during monsoon season. I wanted to erect a bridge over the river. In the beginning the villagers did not help. Some even mocked the idea, saying it was only for me and called the idea, "Chameli Bridge." But finally we got support, materials were collected, volunteer laborers were available and the bridge was finally constructed.

Now I cannot express my satisfaction seeing children running to school over that bridge. It is a bridge of iron, a bridge of letters, a bridge of community. Nothing is achieved without the cooperation of all.

I am now heading five women's microsaving groups. Ten or 20 rupees that used to be spent buying petty cosmetic items have been collected into a fund of 300,000 rupees. We are planning to open a small cooperative in the village soon. We also want to run permanent literacy classes for women and open a library.

All this is the result of my knowing the alphabet, even though I learned it late. Letters have immense power. They have magic. The greatest thing in the world is the alphabet. That is my belief.