Accessibility links
Turks Gripped By Shadowy Group's Coup Trials In Turkey, trials are under way for a conspiracy plot that reads like a political thriller. Members of Ergenekon, a secret network of ultranationalists in the secular military establishment, are accused of conspiring to overthrow the country's moderate Islamist government. 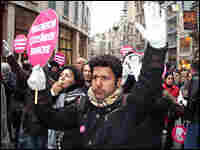 Demonstrators in Istanbul show support for the Turkish government against the Ergenekon network. Ergenekon is the name of a shadowy group accused of planning to overthrow the moderate Islamist government. Gul Tuysuz for NPR hide caption 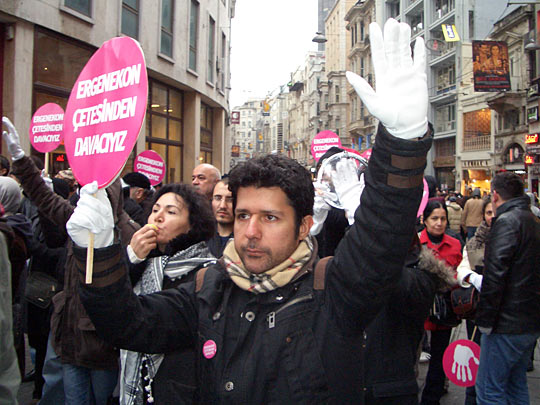 Demonstrators in Istanbul show support for the Turkish government against the Ergenekon network. Ergenekon is the name of a shadowy group accused of planning to overthrow the moderate Islamist government. 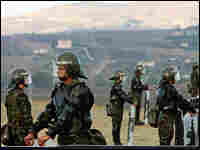 Turkish soldiers stand guard in front of the Silivri district prison in Istanbul, where the trial of defendants in the Ergenekon case was taking place. Sezayi Erke/AFP/Getty Images hide caption 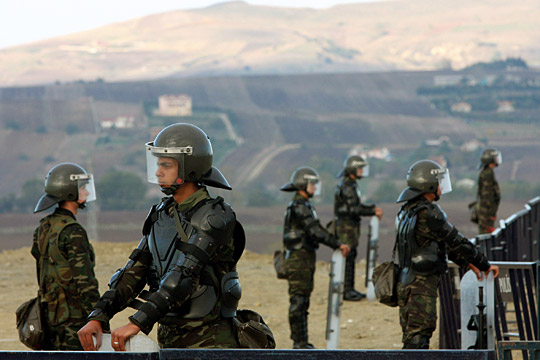 Turkish soldiers stand guard in front of the Silivri district prison in Istanbul, where the trial of defendants in the Ergenekon case was taking place.

In Turkey, trials are under way in a conspiracy plot that reads like a political thriller.

Sensational confessions, arrests within the military and an alleged plan to overthrow a democratically elected government are the dramatic elements of what some call the most important investigation in the country's history.

The trials, which began in October, are considered a challenge to Turkey's military establishment. Turks are riveted by the proceedings, which may shed light on some of the dark chapters in the country's past and determine Turkey's future. Already, the trials have created tensions between Turkey's Islamist-rooted ruling party and the secular military establishment.

The name of the organization accused in the conspiracy plot, Ergenekon, is rooted in Turkish mythology: It was a secret place deep in the Altai Mountains where the Turkic people gathered.

Today, according to the indictment, Ergenekon has come to describe a network of ultranationalists who have conspired to kill and plot coups in the name of "protecting Turkey" from the moderate Islamist government in power since 2002. The landmark election of the Justice and Development party unsettled Turkey's secular establishment, including the military.

Eighty-six defendants have been charged with belonging to the organization. The arrests include retired high-ranking generals, journalists and politicians.

The alleged conspirators are said to have planned to assassinate members of Turkey's political and cultural elite to create chaos and set the stage for a military takeover. The hit list allegedly included Prime Minister Recep Tayyip Erdogan, the head of the army and Nobel Prize-winning author Orhan Pamuk.

"I am happy that Ergenekon is out of the closet. We knew it but we couldn't touch it," says Mehmet Ali Birand, a top Turkish commentator and television personality.

There is history in this uniquely Turkish story. The government has been overthrown by the military three times. The military sees itself as the protector of Turkey's secular state, a role that now seems in question, says Henri Barkey, a Turkey expert at Lehigh University in Bethlehem, Pa.

"It has diminished and tarnished the military because so many of its former generals were caught up in this thing. So in that sense, it is quite damning," he says.

In any conspiracy investigation, there seems to be a plucky newspaper that digs deeper than the rest. In this case, it is Taref, a politically liberal newspaper with offices at the top of a bookstore and an armed guard at the door.

"We are a small newspaper, a newspaper that created a lot of noise for its size," says Yasemin Congar, the lead reporter on Taraf's investigative team. "Some of us have received death threats."

Congar says she personally received death threats for her reporting on the early stages of the Ergenekon investigation in 2007. The initial revelations were so explosive, she says, that Turkish newspaper editors imposed a blackout on the details.

"They thought this was a fairy tale, but it didn't go away, and at the end, of course, almost all of the papers call it the trial of the century," she says.

The Ergenekon investigation has gone beyond the initial coup allegations and has turned into an investigation of what Turks call the "Deep State," a secret network within state institutions and the military that, for decades, has controlled domestic and foreign policy.

In the past, investigations into these sensitive areas have been blocked. One example is a mysterious car crash in 1996 that killed a former police chief, a politician and a mafia boss. The car's trunk was loaded with weapons, narcotics and U.S. dollars. An investigation into the harsher aspects of the decades-long military campaign against Kurdish separatists in the southeast was blocked, too.

"There is a lot of dirt, there are many corpses, there are dead people, and now we are digging it out, and we are finding ammunition everywhere, like hand grenades and C-4 exploding devices, you name it," Congar says.

The discovery of several arms dumps and the mounting evidence has embarrassed the generals. High-ranking arrests have caused tension between the government and the military.

But lately some Turkish commentators complain the trials have gone too far. They charge this is an attempt by the moderate Islamists ruling the country to discredit the secular army and silence the secular political opposition.

"The way the prosecutors are going, they are trying to push the opposition in the corner," says Birand, the TV commentator. "If you are too opposed [to the government] you can be judged and detained. So, that's bad."

"I think it hasn't gone far enough. There have to be more arrests. It is a slow, painstaking process. We know that such a big organization had to be coordinated by people with very good access to power," she says. "I hope no one remains untouchable."

One retired four-star general was released last week after seven months in jail. The court ruled there was not enough evidence to keep him locked up. But arrests continue. In January, prosecutors detained more than 20 serving members of the military and police.

Hugh Pope, an Istanbul-based analyst with the International Crisis Group, likens the trials to "open-heart surgery" on the Turkish system. He says there are valid complaints about the trials; for example, too many people are arrested without sufficient charge.

Still, he says, if Turkey can unravel all of the strands of Ergenekon, it will be a milestone for Turkish democracy.

"In terms of changing Turkey," he says, "the whole sight of serving army officers being arrested, with the general staff of the armed forces allowing this to happen — having to allow this to happen — means we are in a changed country."