Accessibility links
Craft Stores Feeling Handmade Love "It's easier to go buy something, but a lot of stuff is pretty expensive nowadays," one crafter says. For some people, the troubled economy means making their valentines and other gifts instead of buying them. 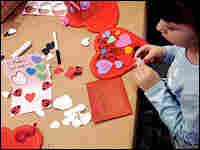 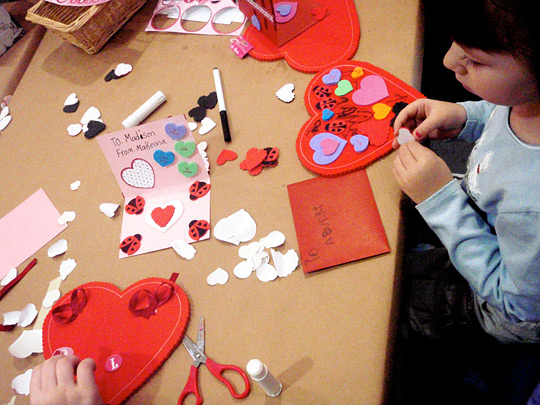 Emma Parks makes a valentine during a free event at a Michaels craft store in Springfield, Va.

About a dozen little kids cram around a table in a Michaels craft store in Springfield, Va., to grab a folded piece of plain cardstock. They can't wait to pile it up with foam hearts, silky ribbons and colorful letters. Their parents are just as excited.

"If we can do an arts and crafts not in my house, that's nice," laughs Vanessa Parks. She and her two daughters are at this family workshop to make their valentines. She says the price was right — free.

About 25,000 people nationwide went to the card-making event at Michaels stores, says Stuart Aitken, the company's chief marketing officer. The free event was Aitken's brainchild, and he says a bad economy can be good for craft sales.

"During down economies, customers tend to go back to basics," Aitken says. "Arts and crafts are the most basic form."

The Jo-Ann craft chain and independent shops say they're also seeing a trend. So do Craft Magazine, the American Sewing Guild and just about every other craft organization.

"People are truly looking for value like they've never looked before," Aitken says. "It's a great time for retailers to understand that and look specifically at what customers want from them to deliver value."

Parks says crafts are a good bang for her buck. "I'd rather buy them a craft to do instead of a toy," she says. "At least it gives them something to work for. They use their minds to think how they want to arrange something."

Another parent at the Springfield event, Jeff Snavely, watches his daughter and son paste together their valentines. He notes that while crafting is cheaper, "it's also more personal and fun. It's easier. You don't have to run around looking for the right thing — you can make the right thing."

Jordan Cox, who is 18 and still lives with her parents, says they'll be proud that she made a card for her boyfriend instead of asking for money to buy one.

"It's easier to go buy something but a lot of stuff is pretty expensive nowadays," she says. "This is pretty easy. It doesn't take much to get ribbon and markers and throw something together."

She and her friend joke that their boyfriends aren't likely to return the gesture. Cox says that's why her handmade gift is so much sweeter.