Accessibility links
Lincoln and Douglass Shared Uncommon Bond President Abraham Lincoln's close and sometimes tumultuous friendship with former slave and abolitionist leader Frederick Douglass is the subject of Giants: The Parallel Lives of Frederick Douglass and Abraham Lincoln. Author John Stauffer says the two men were alike in many ways though they strategically on how to end slavery.

Warning: Language May Be Offensive To Some; Listener Discretion Advised

I'm Michel Martin, and this is Tell Me More from NPR News. Coming up on this President's Day, a new study out of Michigan showed that African-American children in troubled homes were far more likely to be placed into foster care than white children in similar conditions. Why might that be? We'll hear from the author of the study in just a few minutes.

But first, we decided to mark President's Day with a look at the unique relationship between two of this country's most revered leaders. It's not often that 19th-century newsmakers make headlines in the 21st, but Abraham Lincoln did just that when Barack Obama claimed him as a role model, sparking much talk and debate about the similarities between the two men.

But today, we want to talk about Lincoln's relationship to another figure in American politics - Frederick Douglass, the famous leader of the pre-Civil War abolitionist movement. A recently published book explores the close and at times tumultuous relationship between the former slave and the nation's 16th president. The name of the book is "Giants: The Parallel Lives of Frederick Douglass and Abraham Lincoln." And Author John Stauffer joins us now. He teaches history and English at Harvard University. Welcome. Thank you for joining us.

Professor JOHN STAUFFER (English and History, Harvard University; Author, "Giants: The Parallel Lives of Frederick Douglass and Abraham Lincoln"): Thanks, Michel. It's great to be here.

MARTIN: And Professor Stauffer, I don't think that many were aware that President Lincoln and Frederick Douglass were friends. How did this remarkable relationship begin?

Prof. STAUFFER: It began in 1863. Douglass made a trip to Washington to meet Lincoln. He was frustrated with the war effort. He was specifically frustrated by the fact that the Lincoln administration was paying black soldiers half of what white soldiers were being paid, not being promoted for valiant service, and so he goes to D.C. He doesn't have a meeting lined up. He arrives at the White House early in the morning. There's already a long line of people waiting to see Lincoln. He thinks he's going to have to wait all day, maybe two. He sends up his card - within two minutes he's called into Lincoln's office, which reflects the fact that he's already a household name. Douglass was in his own day far more famous for more period of time than Lincoln was. And so, when he sends his card and is called up to the office and passes these whites who were waiting, many of them are outraged. In fact, one of them says, I see how it is, they let the nigger through.

MARTIN: What happened after that?

Prof. STAUFFER: And so Douglass arrives in Lincoln's office, and they actually had a very good meeting, even though Douglass and Lincoln never agreed politically. The best way to summarize Frederick Douglass is that he devoted his career to ending slavery everywhere and achieving racial equality. He was a true radical, racial equality for everyone - men and women, blacks, whites, regardless of character, sex, skin color.

Abraham Lincoln was first and foremost a politician. He was never a radical, never an abolitionist. Even at the end of his life he had a hard time envisioning an America in which blacks lived as full equals. But he believed that the strategy for ending slavery was very gradual emancipation, and I mean, very gradual. In 1858, when pressed on when Lincoln believed the ultimate extinction of slavery should occur, he said, not less than 100 years.

Prof. STAUFFER: So until the Civil War, Lincoln's best-case scenario for when slavery would end would be 1958.

MARTIN: That opens up a whole other area of conversation.

MARTIN: Which we could discuss at some other time. But the...

MARTIN: That doesn't sound like the most fertile beginning for a warm...

MARTIN: So then what happened?

Prof. STAUFFER: The main reason that they bonded is because they both recognized in each other great self-made men. Douglass rose up from a slave to become one of the most famous black men in the world. Lincoln rises up from nothing. He was known as poor white trash. He's born in a log cabin. It was actually a three-sided hut, you know, it was very crude. Lincoln has less than a year of formal schooling and rises up to become president. And the main reason they were able to rise up is because of their love of language, their capacity to learn how to use words as weapons. And long before they ever met, they read, virtually memorized the same six books or authors, and that was central to their self-making.

MARTIN: If you're just joining us, you're listening to Tell Me More, and we're speaking with Harvard University Professor John Stauffer, author of the book, "Giants: The Parallel Lives of Frederick Douglass and Abraham Lincoln."

So their first meeting was cordial.

MARTIN: I assume that Douglass was somewhat encouraged, at least by the reception he was given.

Prof. STAUFFER: He was.

MARTIN: But didn't seem to have changed Abraham Lincoln's mind very much. But then, what happened after that?

Prof. STAUFFER: Their next meeting was a year later, in 1864, in which Lincoln sends a telegraph to Douglass in his home in Rochester, calls him to Washington for an urgent meeting. This time it's an all-expense paid trip. Douglass is picked up in a presidential carriage when he arrives in Washington, whisked to the White House, and Lincoln says, I think I'm going to lose the election in November, and I think I'm going to lose to the Democratic nominee, George McClellan.

McClellan was running on a platform of immediate peace, negotiated settlement, allowing the confederacy to remain a separate nation - almost certainly slavery remains intact. Northerners were tired of the war. Lincoln felt sure that they were not going to vote for him. And so he asked Douglass to embark upon what he called a John Brown scheme, meaning that Douglass would formulate a plan in which he would gather together some hand-picked men, raid the South, bring as many blacks to northern alliance as possible.

And Douglass was amazed. He says, I never recognized the degree to which Lincoln hated slavery as at that meeting. They had a two-hour meeting, and Lincoln kept other congressmen and governors waiting because of his conversation with Frederick Douglass. And their third meeting was at the second inaugural. Douglass had virtually a front-row seat, stood right in front of Lincoln. Lincoln saw Douglass in the inaugural address. Douglass was invited to the White House for the reception after.

He Was initially turned away at the door by a policeman who said, no blacks are allowed to enter. Douglass said, there must be a mistake. He enters the elegant East Room. Lincoln sees him. He is surrounded by a crowd of whites, and he says, here comes my friend, Frederick Douglass. It's good to see you. He shakes Douglas' hand. He says, I saw you in the crowd today. What did you think of my inaugural address? There is no man in these United States whose opinion I value more than yours.

Friendship was a term that was crucially important at the time because from, really, classic antiquity - from Cicero, Plato, Aristotle forward through the 19th Century - friendship was a central philosophical, political, intellectual concept. It was believed that a virtuous society was one in which friendships flourished. And especially in a democratic society, friendship was seen as a test case of whether or not democracy was working. And more particularly, interracial friendship was seen as a symbol of whether or not democracy could work. So Douglass especially promoted, championed his interracial friendship as a kind of test case, on-the-ground example of how democracy could work, and in his hope, an inspiration for others in the United States.

MARTIN: So what do you think the importance of this friendship was to today?

Mr. STAUFFER: To bring it home immediately, I think that Douglass and Lincoln were absolutely central to Barack Obama's own self-making and his ability to win the presidency. Both Frederick Douglass and Abraham Lincoln have been deeply influential on Barack Obama. Obama has on numerous occasions acknowledged his debt to Lincoln. From Lincoln, he understands the importance of being pragmatic, of being willing to sacrifice one's ideals in quest of achieving a common understanding beyond social divide.

And for Frederick Douglass, Obama has said in audacity of hope that from Douglass he understands that in certain circumstances, power will concede nothing without a fight. If in certain areas you need to be pragmatic, in other areas, you need to stand up, and you can't budge. And the most effective way to fight power is through words, through using words as weapons, through converting your audiences.

The other aspect that he learned from Frederick Douglass, which I think is crucial, is that to quote Frederick Douglass now, true love breaks down racial barriers. Frederick Douglass would go on stage, and Douglass, like Obama, is nothing if not handsome, beautiful. Even his - their enemies say that, you know. They are very good-looking men. Douglass had a deep, baritone voice. His words were musical. He was immensely elegant and eloquent, and he would speak to thousands of whites. And when Douglass - in Douglas' day, most whites believed in theory that blacks were subhuman, yet they'd experienced Douglas' magic, his artistry, and they'd essentially shed their racism to the degree that they'd be converted to his cause of abolitionism or anti-slavery, and there are countless examples of that happening.

Similarly, there were countless examples of whites, before they listen to or see Obama who is one of the great orators of our day, when interviewed, said, I won't vote for a black man. I can't imagine myself voting for a black man. Suddenly, they experienc is - Obama's artistry is magic, so to speak, and they're converted in the sense that they vote for him and shed their racism to the degree that they do that.

Obama is - I think the best way to summarize Obama's presidential campaign is that it's a brilliant work of performance art, and he learned that from both Douglass, especially, but to a lesser degree Lincoln.

MARTIN: John Stauffer teaches American literature and history at Harvard University. He's the prize-winning author of "The Black Hearts of Men." His latest book is "Giants: The Parallel Lives of Frederick Douglass and Abraham Lincoln," and he was kind enough to join us from the studios of Harvard University. John Stauffer, thank you for joining us, and Happy President's Day to you.

Mr. STAUFFER: Thank you, Michel. It was great talking to you. 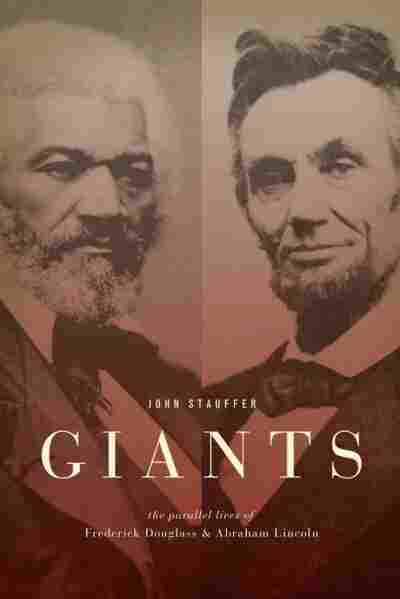 The Parallel Lives of Frederick Douglass and Abraham Lincoln