Accessibility links
Russian Baths Offer Respite From Bitter Winters In Russia, the legendary fierce winter starts to seem endless around this time of year. That helps explain Russians' abiding love for a central part of life: the sauna baths Russians call the banya, which have their own traditions and customs. 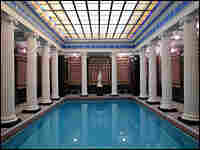 Built in the 19th century for nobles, the Sanduny baths near the Kremlin are Moscow's fanciest. Pushkin and Tolstoy are said to have bathed here. Above, the Sanduny's pool. Sandunov Bathhouse hide caption 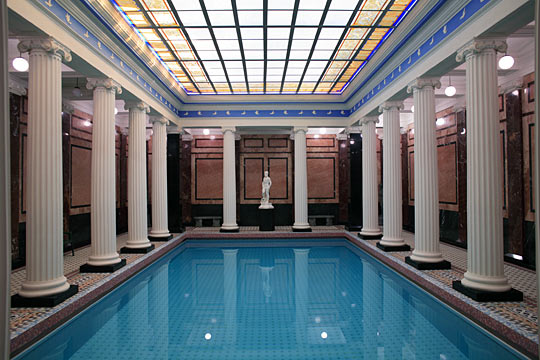 Built in the 19th century for nobles, the Sanduny baths near the Kremlin are Moscow's fanciest. Pushkin and Tolstoy are said to have bathed here. Above, the Sanduny's pool. 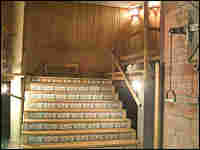 Although similar to a sauna, the steam room in the Sanduny baths is heated by a gas furnace into which water is thrown to make the air steamier. Sandunov Bathhouse hide caption 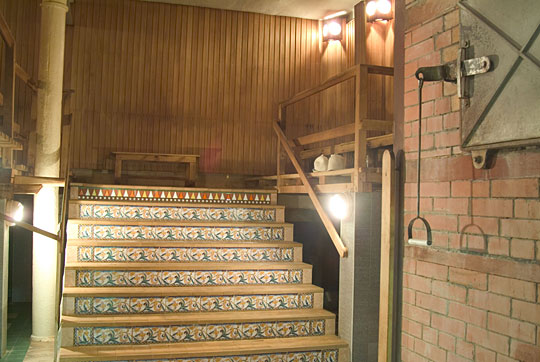 Although similar to a sauna, the steam room in the Sanduny baths is heated by a gas furnace into which water is thrown to make the air steamier.

In Russia, the legendary fierce winter starts to seem endless around this time of year. That helps explain Russians' abiding love for a central part of life — the sauna baths they call the banya.

On one particular afternoon in central Moscow, it's freezing and overcast. The sidewalks are dangerously icy, and bundled pedestrians hold looks of grim determination.

It's to escape such drudgery of daily life that people come to places such as the Donskiie baths, housed in a brick building that looks like any other from the outside.

The facilities are single-sex. Inside the men's section, you first enter a large room filled with high-backed benches. Disrobed men are sprawled all over them, drinking tea or vodka between sessions in the steam room. Everyone's in very good humor.

Under the Soviet Union, the banya fulfilled an important social function by providing the millions living in crammed communal apartments a place to bathe. The Donskiie baths — which looks a little old and drab — has kept its prices low so ordinary Russians can still afford to come here regularly.

After undressing, each person gets a sheet to wrap around one's body before heading into the baths. The main room has showers and benches with tubs of water. Some people are washing, others getting ready to enter the hallowed center of activity: the steam room.

The steam room looks a lot like a sauna, only it's bigger and not as dry, because ladles of water are thrown into a furnace. People here sit on wooden platforms or beat each other with birch branches. It may sound masochistic, but feels a lot like a massage.

The banya has many traditions and customs. An employee called a banshik stokes the furnace. Some have their own fan clubs — groups of people who come the same time every week when they're on duty.

The banshik opens the furnace to throw in ladles of water. He maintains a certain amount of steam, often infusing it with mint, eucalyptus and other scents.

Heading out after a session, Gennady Novitsky says attending the banya takes practice.

"It's a whole science. You use the birch leaves to draw the steam close and open your pores. That helps you sweat out the poisons," he says.

After the scorching hot banya, you jump into a small pool of freezing water. It feels like being stuck with needles, and you become lightheaded. Afterward, you head back to the steam room and repeat the routine several times. Novitsky says the absolute feeling of relaxation erases all the concerns of daily life, including its hierarchies.

"There's no such thing as a general in a banya. Everyone's equal here," he says.

Nikolai Ablov is in charge of the pipes and boilers. He says the banya routine is as necessary for Russians as eating and drinking.

Little has changed about the banya since Soviet days — except the prices. A visit to the Donskiie baths costs $10, and many consider that a lot. But elsewhere in Moscow, people pay hundreds of dollars.

Take the Sanduny baths near the Kremlin, Moscow's oldest and fanciest banya. The gilded baths were built for nobles in the 19th century and were said to have been frequented by the likes of Aleksandr Pushkin and Leo Tolstoy. The main room has an ornate gothic wooden ceiling and mosaics depicting idyllic Black Sea scenes.

"It's the ultimate in relaxation. Our clients want fewer people to jostle them, so they demand we charge high prices," he says.

But back inside the downscale Donskiie baths, bather Gennady Novitsky says it doesn't matter where you go to the banya.

"When you emerge on the street afterward, you feel so light you'll float away," he says.

Novitsky recommends a couple of shots of vodka to bring you back to earth.