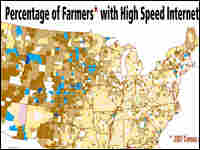 "Other people don't like to say bad things about rural areas," Katz began. "So I will."

The stimulus package includes $7.2 billion to expand broadband Internet access into "underserved" and rural areas. Katz listed ways that the $7.2 billion could be put to better use, including an effort to combat infant deaths. But he also spoke of rural places as environmentally hostile, energy inefficient and even weak in innovation, simply because rural people are spread out across the landscape.

"The notion that we should be helping people who live in rural areas avoid the costs that they impose on society ... is misguided," Katz went on, "from an efficiency point of view and an equity one."

Just the week before, a New York Times story on the rural broadband funding in the economic stimulus package used the phrase "cyber bridge to nowhere." That stung the rural issues advocates at the Center for Rural Strategies in Whitesburg, Ky.

"When they talk about 'cyber bridges to nowhere,' what they're really doing is betraying arrogance," complains Dee Davis, the center's director. "When people think of rural as 'nowhere,' [they're] saying the people who live in those places aren't worth working with, they're not worth helping."

That is not how to address an economic crisis that affects everyone, Davis adds. "What we need to do is something that'll lift the economy in all places, not just favor one area over the other."

Rural advocates say high-speed access is a necessity in a global economy and a critical part of economic revival and survival for rural places. Obama agreed during his campaign for president. His rural platform included this plank:

"Barack Obama will ensure that our rural Americans have access to modern communications infrastructure. He will ... [promote] affordable broadband coverage across rural America as well."

Davis notes that remote health care and education increasingly depend on good Internet access. And an increasing number of rural jobs are dependent on broadband.

One example of the connection between broadband and jobs is in Ten Sleep, Wyo., a town of 350 at the base of the Big Horn Mountains. Ten Sleep is home to vast ranches and a global cyberbusiness that expects to employ as many as 700 full- and part-time teachers from across northwest Wyoming by the end of the year. That would bring the company's payroll to close to $3 million a year.

The cyberbusiness started three years ago, when Kent Holiday was visiting in-laws in Ten Sleep. Holiday had been a top executive at Korea Telecom in South Korea. So when he noticed spools of orange cable along freshly dug ditches in Ten Sleep, he knew the tiny Wyoming town was getting the kind of blazing fast fiber-optic service still elusive in most big city neighborhoods. Holiday called Chris Davidson, the general manager of Tri County Telephone, the local telephone, broadband and television provider.

"We discussed his idea for this business of teaching English via live video connection to South Korean students," Davidson recalls. "And it ended up that he headquartered his company right there in Ten Sleep."

There are plenty of other anecdotal examples of broadband bringing jobs and commerce to rural towns. But there aren't definitive studies or data, says Shane Greenstein, an economist at Northwestern University who specializes in telecommunications.

The reach of broadband nationwide is also unknown. There is no comprehensive tracking of broadband service, including which neighborhoods, towns and cities have it and which don't. No federal agency or private group keeps track.

But surveys conducted by the Pew Internet and American Life Project indicate 57 percent of the people interviewed nationwide do have broadband connections at home. But only 41 percent of the rural respondents connect at high speeds.

Another survey indicates that broadband generally tends to go to two kinds of rural places: counties with large farms, and mountain and beachside enclaves that attract owners of second homes and tourists.

The 2007 Census of Agriculture asked farmers and ranchers about Internet access. The resulting data was analyzed county-by-county by geographer Tim Murphy and writer Bill Bishop for the Daily Yonder, a rural news Web site sponsored by the Center for Rural Strategies.

"Broadband gets to places where there is either an economic need or an economic demand from people who have the money to buy it, or businesses that absolutely have to have it," Bishop concludes.

The farmers and ranchers in broadband counties use their Internet access to monitor commodity prices, weather conditions, markets and agricultural news. Some even run irrigation systems with Internet-based systems. The towns with recreational and scenic amenities — such as Aspen, Colo.; Jackson Hole, Wyo.; and Moab, Utah — attract urban and suburban transplants who expect broadband, and entrepreneurs who want to base their businesses in desirable locales. These are places with the demand and resources. They don't need a $7.2 billion stimulus package to get broadband.

What about the rural communities that are left? Bishop says, "Those places get served when society decides that it's right to extend the service that most of us get without question."

The Costs Of Expanding Into Rural Areas

Those places need help, Greenstein adds. "We've had a build-out in virtually all the areas of the country that were cheap to build out. And so we're now looking at all the expensive households to reach. It's going to be a lot of money. That's taxpayers' money, and you've got to start asking, 'Should taxpayers pay that?' "

Greenstein also wonders about economically distressed communities that lost the mine or sawmill or manufacturing plant that provided most local jobs.

"If you go into a town that's already deteriorating because the local economy's deteriorating," Greenstein asserts, "broadband's not going to save that situation."

Rural advocates recall the decisions the nation made decades ago to use federal funds to extend electricity and phone service to all Americans, including those in the most remote and least-populated places. They view broadband as a similar kind of right to infrastructure.

"If you're not connected," Davis says, "you're sitting out the dance."