Accessibility links
Moscow Sends Mixed Messages To Obama The Obama administration has offered to "reset" relations with Russia, which became increasingly strained during the last years of the Bush presidency. But many Russian analysts see little hope for optimism. 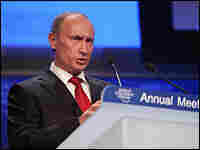 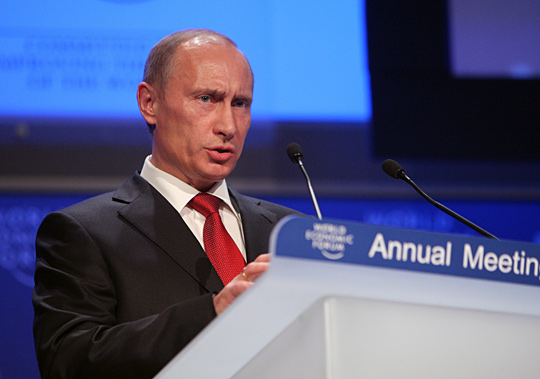 There has been confusion about mixed messages coming from Moscow. But some analysts say the Kremlin's swings between threats and conciliation send a very clear message: that Russia isn't really interested in improving relations.

In the past decade, Prime Minister Vladimir Putin has overseen a massive drive to put large swaths of Russian industry under state control, often by force.

So when Putin addressed world business leaders last month, the audience was taken aback to hear him warning against "blind belief in the power of the state."

Some picked up on his criticism of Wall Street and called it classic Putin confrontation. Many others heard his statement that Russia is part of the global financial system and thought his words sounded liberal and conciliatory.

But only a few days later, Moscow sent out another message, by appearing to have pressured the central Asian country of Kyrgyzstan to shut down a U.S. air base used to supply forces in Afghanistan.

Russian President Dmitry Medvedev said Russia was giving Kyrgyzstan billions in financial aid, but the Kremlin denied it was connected to the future of the air base.

"It's time, to paraphrase President Obama, it's time to press the reset button," Biden said.

He said Washington had sent a strong signal. But asked whether Russia was willing to take any concrete steps in response, he said no. Foreign policy isn't an "Oriental bazaar" for bargaining, he said.

Despite the stated hopes for better ties, the two sides face deep divisions — especially over U.S. plans for a missile defense system in Europe, and Russia's efforts to reassert control over former Soviet republics.

Foreign policy scholar Georgy Mirsky says the Russians are sending mixed messages because most officials are uncertain which way the wind is blowing in the Kremlin.

"Basically, it's not a real problem to be more liberal or to be hard-line. They're ready to change their stand overnight," he says.

Mirsky says he believes Putin and Medvedev are facing a choice of strategy: continue blaming the financial crisis on the United States, or try to repair relations in the hope Western investment will help the economy.

But military analyst Alexander Golts has a different view. He says Moscow's changes of tack are part of a well-defined strategy. He says Putin, a former KGB officer, often uses liberal-sounding rhetoric to mislead the West.

"Mr. Putin thinks about his public speeches as [if they were] some secret operations. He says what audience[s] want from him," Golts says.

Golts says Moscow's main goal is to boost its status on the world stage by forcing Washington to take Russian views into account. He says Moscow's offer to allow U.S. supplies to Afghanistan to cross Russian territory is really about increasing Russia's importance.

Golts says the strategy is paying off: Western concerns such as Russia's human rights record and European energy security have been sidelined. Instead, the main issues between Washington and Moscow are missile defense and arms treaties, as they were during the Cold War.

"The strategy is very simple: just to preoccupy minds of Russian counterparts in the West and in U.S. particularly, with [the] old game of counting warheads," he says.

But Golts says Russia's anti-Americanism is harming its own interests: A resurgent Taliban in Afghanistan would pose a serious threat to Russia's south. But Moscow is paying billions it can ill afford to hamper the American-led effort, he says — and buy the status of a superpower.