Accessibility links
Iran Cracks Down On Human Rights Activists Every so often, activists will be arrested, visitors from the U.S. will be detained and groups shut down. It's not enough to spark protests in the streets, but it appears to be calibrated to discourage the spread of a human rights movement in Iran. 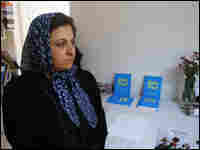 Nobel laureate and women's rights activist Shirin Ebadi, in her Tehran office on Nov. 25, 2008, has urged Iran to heed its commitment to international conventions on children's rights and to stop executing offenders for crimes they committed under the age of 18. Atta Kenare/AFP/Getty Images hide caption 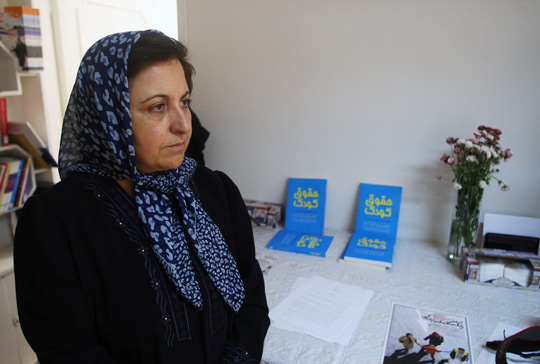 Nobel laureate and women's rights activist Shirin Ebadi, in her Tehran office on Nov. 25, 2008, has urged Iran to heed its commitment to international conventions on children's rights and to stop executing offenders for crimes they committed under the age of 18.

A kind of slow-motion crackdown on human rights activists is under way in Iran.

Every so often, activists will be arrested, visitors from the U.S. will be detained and groups shut down. It's not enough to spark protests in the streets, but it appears to be calibrated to discourage the spread of a human rights movement in Iran.

An hour before the ceremony was due to begin, police arrived, broke up the gathering and shuttered her Human Rights Defenders Center.

"There was a resolution passed against Iran in the United Nations recently and, I think because of that, they closed down illegally our office," Ebadi says.

The U.N. censure of Iran was based in part on a report Ebadi provided about the violation of human rights here. In early January, scores of young men gathered outside Ebadi's home in Tehran and began chanting slogans, accusing her of working for America. They spray-painted the outside of her apartment building and broke a sign.

"I called the police," she says. "They came here and they did not stop them or they did not tell them to go. And in front of their eyes they did that."

Ebadi is just the most well-known human rights target. The pressure extends to the women's rights movement and the student movement. And against political reformers, such as Ibrahim Yazdi, head of the Freedom Movement of Iran, which is prohibited from running candidates in elections.

"In [the] Ahmadinejad administration, the pressure on all the dissidents and the opposition has intensified," he says. "Not only against Freedom Movement of Iran, not only against Shirin Ebadi and her colleagues. Whenever the government feels weak inside, then it feels threatened by any move. Therefore, they cannot tolerate even a small gathering."

And that extends even to those who are not activists, but who travel abroad.

Take the case of two brothers, Arash and Kamiar Alaei. Both are doctors who treat AIDS cases and have attended medical conferences around the world. Last year, they were arrested and charged with espionage. They have spent more than seven months in prison. Not long ago, they were found guilty of working for Americans trying to overthrow the Iranian government. They were sentenced to three and six years in prison, respectively, an action that has caused great concern to activists like Yazdi.

"The way that they are treating the Alaei brothers also shows that they are even either insecure, and they don't feel comfortable with their activities, or that there is some personal clash against them," he says.

Activities like these have not always prompted the heavy arm of the state. But in recent years, it seems, Iran's leaders have become more uneasy about what they believe are U.S. efforts to spark a soft revolution in Iran.

Mohammed Marandi, a professor of American studies at Tehran University, blames the U.S. for the current crackdown.

And Iranians who travel frequently to the U.S. and other Western countries.

There is not a big outpouring of support here for these activists. Reaction is more like a chill that can discourage others from similar activities. But even some conservative analysts, such as Amir Mohebian, argue that such repressive actions may be counterproductive.

The discussion of human rights "needs the dialogue between countries and civilizations," he says. "Do you agree when the Iranian authorities shut down, for instance, Shirin Ebadi's group? I think it was unnecessary."

For her part, Ebadi says this kind of pressure will not stop her from speaking out.

"Really, I don't feel secure, but this will not cause me to leave the country or to stop my activities," she says. "The Iranian government knows very well that as long as I am alive, I will do my duty and activities."

And just this month, after Iran's athletic association invited a U.S. women's badminton team to compete in a tournament here, Iran's Foreign Ministry refused to grant the visas.