Accessibility links
A-Rod Offers Details On Steroid Use Alex Rodriguez met the press for the first time since acknowledging that he took performance-enhancing drugs. A number of his New York Yankee teammates were on hand in Tampa, Fla., to lend support to Rodriguez as the team begins spring training.

Alex Rodriguez met the press for the first time since acknowledging that he took performance-enhancing drugs. A number of his New York Yankee teammates were on hand in Tampa, Fla., to lend support to Rodriguez as the team begins spring training.

Baseball superstar Alex Rodriguez says it was a cousin who injected him with a banned substance from 2001 to 2003. He says the drug was bought in the Dominican Republic. And he hoped it would give him what he called "an energy boost". A-Rod held a news conference today in Tampa, Florida, where he reported for spring training with the New York Yankees. NPR's, Tom Goldman has more.

TOM GOLDMAN: An estimated 200 reporters showed up today at the Yankees' George M. Steinbrenner field, in Tampa, hoping for the details from Alex Rodriguez that weren't there last week. In his interview with ESPN's Peter Gammons last Monday, A-Rod acknowledged he took a banned substance but he didn't say what it was, from whom he got it, where he got it. Anticipating questions about that, Rodriguez opened his press conference today with this.

Mr. ALEX RODRIGUEZ (Baseball Player): Going back to 2001, my cousin started telling me about a substance that you could purchase over-the-counter in DR known as, in the streets, is known as boli or bole. My cousin and I, one more ignorant than the other, decided it was a good idea to start taking it.

GOLDMAN: Rodriguez was asked what he got out of using the drug.

Mr. RODRIGUEZ: I'm - you know, I'm not sure what the benefit was. I will say this: When you take any substance or anything, and especially in baseball, it's half mental and half physical. I've certainly felt more energy, but it's hard to say - hard to say.

GOLDMAN: If this were going to be A-Rod's tell-all, it ended yet again with more questions. It's still not certain what the drug was. One anti-doping expert who watched the press conference said it could be Primobolan or Dianobol. Over and over, Rodriguez blamed his youth at that time, even though he was 26, 27, and 28 years old during that three-year span. He was naïve, he said, and didn't really know the drug was a steroid. Yet he and the cousin were secretive throughout the process. They didn't tell anyone about it. At the press conference, a New York Post reporter tried to reconcile the seemingly contradictory statements.

Unidentified Man: Alex, you mentioned earlier that you didn't think at the time that what you and your cousin were doing was wrong. But if you didn't think it was wrong, why were you so secretive and so reluctant to ask for assistance with what you're doing?

Mr. ERIC DEZENHALL: On one hand, he admitted that he did something habitually, yet characterized it as being naïve, which is sort of like saying: I'm not prejudiced, I just don't like minorities.

GOLDMAN: Eric Dezenhall runs a crisis management firm based in Washington D.C. Dezenhall watched the Rodriguez press conference and says he was frustrated by a lot of the inconsistencies. But as classic crisis management goes - and A-Rod has been consulting with a number of media strategists - Dezenhall says Rodriguez did what he had to do.

GOLDMAN: And Rodriguez certainly has help. The Yankees PR person running the press conference ended questions after A-Rod said the following: I screwed up big time. I asked everyone to judge me from this day forward. 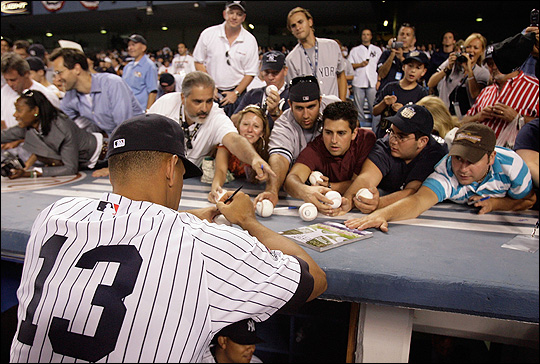 Alex Rodriguez signs autographs after the last regular-season game of 2008.

A chastened Alex Rodriguez answered a battery of questions Tuesday about his use of performance-enhancing drugs, saying a cousin whom he declined to name injected him dozens of times with an over-the-counter substance to gain an energy boost.

The New York Yankees star, 33, admits that using the banned drug that he says he obtained from the Dominican Republic was a "stupid mistake," but one that ended in 2003 after a three-year period of injections that took place roughly twice a month.

"The only thing I would say to the American people is 'judge me from this day forward,' " he said, concluding a question-and-answer session that lasted more than half an hour.

Rodriguez met the media 10 days after Sports Illustrated reported that he had tested positive in 2003.

Rodriguez repeated his early admission that he used substances that he said were sold over the counter between 2001 and 2003, while playing with the Texas Rangers. He insisted he did not use steroids or human growth hormone before or after that period.

Rodriguez started his news conference by reading from a prepared statement. At the end, he said "as for my teammates," then paused for 37 seconds, apparently overcome by emotion and searching for the right words, before saying simply "thank you."

Media reports of tensions between Rodriguez and his Yankee teammates long predated his admission of steroid use. Tuesday, he expressed hope that "through this crisis we are going to become ... closer than ever."

"He's a huge investment. So he's an asset, and this is an asset that's currently in crisis," Yankees general manager Brian Cashman said. "So we will do everything we can to protect that asset. ... If this is Humpty Dumpty, we've got to put him back together again, to get back up on the wall."

As members of the media fired questions, Rodriguez repeatedly described himself as "young," "stupid" and "naive" at the time he took the drugs. He suggested that he hadn't fully focused on the implications of his actions.

"I knew we weren't taking Tic Tacs," he said. "I knew it could be potentially something that was wrong. I wouldn't imagine taking something like that today, obviously. It's a different world. A different culture."

He said he doesn't really know what — if any — advantage he gained from taking steroids, though he did say he felt "more energy" while taking them.

"I'm not sure what the benefit was," he said in response to one question, adding that he thought any perceived benefit was "half mental and half physical."

'It Was Really Amateur Hour'

Reporters sought to understand why a professional athlete would inject drugs into his body, unsupervised. Rodriguez offered up various answers:

"I didn't think they were steroids. It was over the counter. It was pretty basic. It was really amateur hour. It was two guys doing a very amateur and immature thing. We probably didn't even take it right. All these years I never thought I did anything that was wrong."

Pressed to respond to criticism from fellow baseball players, he declined to fire back.

"Everyone has their opinions and their beliefs," he said.

He turned aside a question seeking specifics about his cousin's involvement.

"I'd rather not get into who my cousin is," he said. "I really don't think that's relevant."

'I'm The One Who Screwed Up'

"This is about me. I'm the one who screwed up and no one else," he said — one of several attempts he made Tuesday to shoulder the responsibility for his actions, but move on.

Rodriguez is the youngest player in baseball history to hit 500 home runs, and many believe he might challenge the all-time home run record now held by Barry Bonds, who is also tainted by charges of steroid use.

Rodriguez acknowledged that his statistical record would now be the subject of skepticism.

"I'm sure there will be a lot of debates and a lot of questions about everything I did in that period," he said.

But he insisted that his best overall statistical years took place before the period in which he admits he took steroids and then four years later, in 2007.

He repeatedly said he hoped to put the incident behind him, saying the past 15 months "have been very difficult."

He hinted at an upcoming venture to send an "anti-steroid" message to "kids all over the country."

And the game's highest-paid player also had this to say:

"One thing I know for sure is that baseball is a lot bigger than Alex Rodriguez."

This article includes material from The Associated Press.