Accessibility links
Is It Time To Declare Some Big Banks Dead? Some of the nation's biggest banks may be so weak they can be described as "dead men walking." As the government attempts to stabilize the nation's financial system, officials must decide whether to continue to prop up banks as private entities, nationalize them or shut them down.

Listen
Is It Time To Declare Some Big Banks Dead? 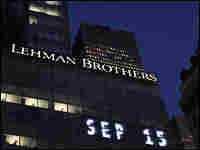 The U.S. government decided against rescuing Lehman Brothers. The September decision, which led the financial giant to file for bankruptcy, is being watched for clues on how the government might handle future bank failures. Mario Tama/Getty Images hide caption 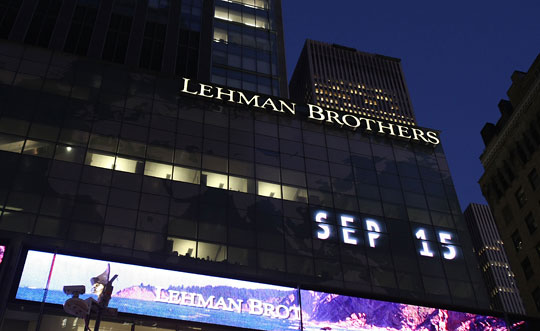 The U.S. government decided against rescuing Lehman Brothers. The September decision, which led the financial giant to file for bankruptcy, is being watched for clues on how the government might handle future bank failures.

It's The Bank Lobbyists

As the government attempts to stabilize the nation's financial system, officials must decide whether to continue to prop up banks as private entities, nationalize them or shut them down.

NPR's Ari Shapiro asked economist Raghuram Rajan of the University of Chicago Booth School of Business what determines whether a bank falls into the category of "dead men walking."

"Well, the banks are making significant losses coming from the mortgage-backed securities that they held, coming from people who've lost their jobs and are now defaulting on credit card loans," says Rajan, formerly chief economist at the International Monetary Fund. "And some of the banks are essentially completely decapitalized — that is, their liabilities exceed the value of their assets. So to that extent, some of them are in fact dead men walking."

Is it possible that some of those liabilities will actually be worth more in a year or two if banks are not forced to sell off some of those toxic assets right now?

Quite possibly. And to some extent, that is almost true of banks all the time. Banks typically have fairly illiquid assets.

Assets that they are not able to sell immediately in that moment.

Absolutely. But if you held them to maturity, perhaps the loan would repay in full. The question is, will the market give me time?

And the answer is?

Or should the government just say, "We're going to buy you up so we don't have to keep dumping money into you"?

There is this question of nationalization that keeps coming up. When the government actually owns these banks, it becomes responsible for all the liabilities of the banks. Supposing the government goes in and replaces the equity holders and says now these are government-owned banks. Then the government becomes responsible to all the debt holders who otherwise have made losses. In other words, with a nationalization, what you get is a transfer of wealth from the taxpayer to all the bondholders who earlier were dependent on the private bank to repay them. Now [they] can depend on the full faith and credit of the government to repay them.

Why do so many economists think we should do this now?

Well, I think some of it is driven by the sense that if we don't nationalize, then these equity holders in the banks are getting a free ride where the bank can be run with government protection — where the debt of the banks is insured, the equity holders get all the upside, the government gets nothing for it.

We've been talking about the banks as though they are a monolithic body. But in fact, there's a lot of variation in the health of one bank versus another. How do you tell which banks are worst off, which banks are doing pretty well and what the difference is?

This is a problem. We don't know, which is why the government has suggested that it will go in and do what it calls stress tests. You go in and you try and find out what is the value of the bank under the worst-case scenario. And then you decide whether it's worth saving by putting in more money, or whether it should be broken up and sold in pieces, or whether it should be merged with another bank. The real question that the government hasn't made any statements on, partly because this is a very sensitive question, is what will it do when it finds out that the bank actually is dead when it does these stress tests?

What do you think is the appropriate thing for the government to do if it finds out that these banks are essentially, as you've described some of them, dead men walking?

Well, it will have to figure out what parts of the bank are salvageable. It will also have to figure out whether these banks have a variety of contracts which, if they fail, will cause disruption in the markets. And if these banks are forced to fail, those markets may get roiled. We don't know. We do know that when Lehman [Brothers] went bankrupt, there were problems in some markets. Eventually, over time, that got sorted out. Perhaps the government has a better sense now how to limit the damage to the markets, and it can actually close down some of these larger banks. But that's a guess.