Accessibility links
Corruption Leads to Deep Debt for Guest Workers More than 100,000 temporary workers come to the United States each year; they pay a battery of fees to recruiters who place them in low-wage jobs. Critics say the system is ripe for abuse; immigration bills in Congress would do little to change that. 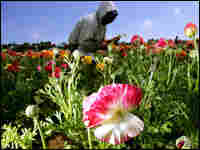 A Hispanic worker harvests bulbs at the Flower Fields in Carlsbad, Calif. The debate in Washington continues over whether to create a temporary guest worker program for immigrants wishing to find work in the United States. Meanwhile, critics such as Rep. George Miller (D-CA) say there isn't enough oversight for an H2 guest-worker program that already exists. Sandy Huffaker/Getty Images hide caption

Son was working on a pineapple farm in northeastern Thailand when a recruiter approached him about the possibility of working in America. Son — as he asks to be called — says he was open to the idea.

Already in his 40s, Son was desperate to save money to send his two children to college. But he didn't let himself be wooed. He traveled to the recruitment agency's Bangkok office to check them out.

"They showed me all the documents," Sons says, speaking through a Thai translator. He even went to the Thai Department of Labor. "They are a legal company approved by the Thai government, and the information about the jobs they showed me seems real."

More than 100,000 temporary workers make the journey to America each year. They come for low-wage jobs in industries such as agriculture, forestry and hospitality — paying a battery of fees to foreign recruiters. Critics say it's a system ripe for abuse, and none of the broad immigration bills floating around Congress would change that.

In Son's case, recruiters offered three years of work. At $8.24 an hour, it was big money — even with the $11,000 fee the recruiters demanded upfront.

"I realized that the first year, I would have to work for nothing," Son says. "But I hope the opportunity will be even better, and I can go to the next job that pay more and more."

Son handed over his life savings, and his father-in-law mortgaged his farm. In August 2005, Son arrived in North Carolina.

Corruption in the Recruitment System

In a spiral notebook, Son kept neat columns, logging each workday. He cut tobacco leaves at one farm, 8:30 a.m. till 4:30 p.m., then labored a few more hours at another farm.

"As weeks go by, the work becomes less and less," Son says. "And then by October, I almost stop working. And the last week of my work, they still owe me the wage."

It turns out the H2 guest-worker program that brought Son to America is seasonal: The job must last less than one year — not the three years that Son had been promised.

Last month, Son and 21 other Thai workers sued their recruiters. They accuse agents of Million Express Manpower, in both Bangkok and North Carolina, of fraud, breach of contract and illegal trafficking. Son asked NPR not to use his real name because, when another worker in the suit spoke to a North Carolina newspaper, the recruiter back in Thailand threatened his family.

Lori Elmer, at Legal Aid of North Carolina, is Son's lawyer. She says the recruiters exploited the Thai workers' poverty and indebtedness, telling U.S. growers that it was an advantage for them: "In other words, because of the extreme debt that these workers would come into the United States with, they would work hard and scared, and you could be assured they would never quit."

By far, most guest workers in the United States come from Mexico. Corruption is part of that system, too, though the amounts of money involved tend to be in the hundreds, not thousands, of dollars. In recent years, Elmer says, she has seen more guest workers coming from farther away — not just Thailand, but Indonesia, South Africa, Peru. And she says an increasing number of labor brokers are being used to bring them to the United States.

As for Million Express Manpower in North Carolina, it's gone out of business. One of the company's principals, Ray Raynor, answered his cell phone but declined to comment.

The U.S. Department of Labor is in charge of these labor programs, but a spokeswoman points out that there is "no provision in the law" to monitor overseas recruitment. Rep. George Miller (D-CA), the powerful head of the House Committee on Education and Labor, says that's the heart of the problem.

"I think the Department of Labor has to take responsibility for these workers," Miller says. "We are inviting them; they're called 'guest workers.' This isn't how you treat guests."

Miller says he's flabbergasted that even as Congress considers creating a huge new guest-worker program, no one is talking about regulating recruitment. Miller has proposed his own bill: It would hold employers in the United States jointly liable for the actions of the recruiters they hire abroad.

"I think you have to try to include the entire system, from start to finish," Miller says. "All the parties have to acknowledge what one of the other parties is doing and take responsibility for that."

But James Holt, a consultant to the National Council of Agricultural Employers, says, "There's a bit of hype going on here about the problem."

Holt says many guest workers are brought in for the same jobs year after year — with no problems at all. That means only a few thousand are actively recruited. And considering that the vast majority of agricultural workers are in the United States illegally, employers who use the guest-worker program believe they're doing the right thing. Holt finds Miller's proposal for regulation unrealistic.

"The real question is: How can the U.S. employer ensure compliance of a foreign agent with a U.S. law in a foreign country? They can't. That's the problem," Holt says.

"You hear that such and such a company was caught charging excessive amounts, or 'selling visas,' as it's sometimes described. And the consulate suspended them — they kicked them out. They won't do business with them."

But Elmer of Legal Aid says the embassy in Bangkok never asked Son and the other Thai workers how much they had paid the recruiters.

"The workers had actually received in writing an order not to disclose the actual amount they had paid in recruitment fees," Elmer says. "They were told to lie."

Son is now living in the Washington, D.C., area, with a special visa for victims of trafficking. He's still angry that he fell for a scam. But Son says people in rural Thailand routinely pay smaller fees to work in countries like Taiwan or Israel, so the bigger fee he paid made a certain sense.

"I thought the wage in the U.S. is higher than in those countries, and also, everyone wants to come to America," Son says.

Son hopes his lawsuit will show others it's not worth the price.