Accessibility links
High-Rolling Dubai Economy Comes Down To Earth The global drop in consumer and investor confidence has arrived in the Persian Gulf emirate of Dubai, where growth had been relentless. Now, as layoffs mount and unemployed foreign workers flee to escape their debts, the government is struggling to contain the growing anxiety. 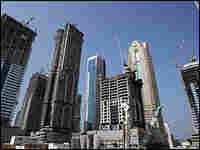 After years of dizzying growth, Dubai is feeling the effects of the global downturn. Construction is slowing as lending dries up, and both foreign workers and Dubai citizens are feeling the pain. Marwan Naamani/AFP/Getty Images hide caption 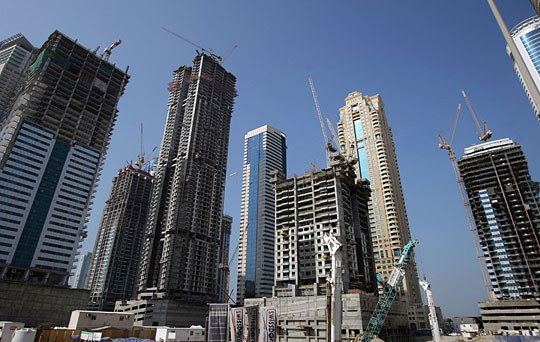 After years of dizzying growth, Dubai is feeling the effects of the global downturn. Construction is slowing as lending dries up, and both foreign workers and Dubai citizens are feeling the pain. 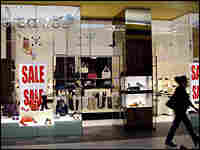 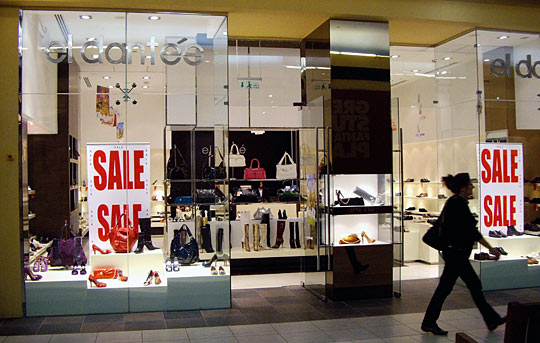 A woman walks past an empty shop offering discounts at a shopping mall in Dubai, Feb. 4, during the annual Dubai Shopping Festival.

Consumer and investor confidence are dropping worldwide, even in the oil-rich Persian Gulf.

Perhaps the shock has been sharpest in the emirate of Dubai, where growth had been relentless in recent years. Now, as layoffs mount and unemployed foreign workers flee to escape their debts, the government is struggling to contain the growing anxiety.

For the past several years, investors, workers and consumers treated the Dubai economy like a roller coaster that only goes up. Then last fall, they suddenly found themselves looking over the edge. It was a view some foreign workers didn't stick around to contemplate.

If you're looking for a scene that reflects the uncertainty and anxiety behind Dubai's image of bottomless abundance, you might start at the airport parking lot, where, The Times of London reported earlier this month, 3,000 partly paid-off cars had been abandoned by their suddenly unemployed expatriate owners.

The government's concern about plummeting confidence levels is so great that the police chief was called on to issue a vehement denial. He did, saying only 11 cars were abandoned at the lot — even though banks, car companies and airport security workers say the number is much higher.

More evidence that debt payments aren't being met can be found at a massive auction on the industrial fringes of the city. Many of the vehicles going under the hammer are modest, working-class sedans and light pickup trucks, being sold by banks after their owners couldn't make payment on their loans.

Local law says foreigners unemployed for more than one month lose their residency status and loan defaulters can face prison.

Just around the corner lies part of the other end of the Dubai auto market: a luxury used-car showroom where a silver Bentley with a burgundy convertible top nestles next to an Aston Martin DB9. The young Bangladeshi men who polish the gleaming hoods say there seems to be a good business these days buying back trophy cars from white-collar workers with cash-flow problems.

Richard Thompson, editor of the Middle East Economic Digest, says at the root of it all is the collapse of confidence in the Dubai real estate market, coupled with banks that are afraid to lend money.

"People are uncertain about their futures. They've stopped going to get mortgages; even when they do want mortgages, the banks aren't lending anyway. So people aren't putting down payments on properties," Thompson says. "This means developers aren't getting cash up front. They can't then pay their contractors, and that is filtering all the way down to the site workers who aren't being paid."

Economist Eckart Woertz at the Gulf Research Center says real estate has been "crazy, with condos being flipped like stocks." He says in terms of fleeing workers, the next time to pay attention will be the end of the school year.

"And if it's white-collar employees leaving, that of course really hurts the economy, because these are the people who have spent on luxury apartments, on restaurants, on entertainment. Basically, people did not really save a lot over here in Dubai," Woertz says.

Neighbor's Bailout May Come With Price

Perhaps not surprisingly, Dubai's neighbors in Abu Dhabi, the oil-rich, more conservative capital of the United Arab Emirates, have a certain "we-told-you-so" attitude now. Analysts say talks are almost certainly going on behind closed doors about a bailout for Dubai. Woertz says there are signs that the cost to Dubai may be handing over some companies to Abu Dhabi.

"It seems that Abu Dhabi will probably help Dubai, but probably also at a price — they want to have control of assets if they give away money, and they won't bail out all projects," he says.

Still, Dubai keeps up appearances. Some cities have heritage or cultural festivals; here, they celebrate the six-week Dubai Shopping Festival.

But this year, the designer goods aren't flying off the boutique shelves, and the Muzak seems tinged with melancholy. The Chinese state circus is performing here this month, but locals say the circus that is Dubai is now down to two rings at best.