Accessibility links
A Movie's Look, From Toilet To Villain's Lair Lighting, props, sets and costumes all contribute to the "look" of a movie — and production designer J. Michael Riva, the grandson of Marlene Dietrich, makes sure all those elements integrate seamlessly for a film. He has worked on blockbusters such as The Goonies and A Few Good Men.

Listen
A Movie's Look, From Toilet To Villain's Lair

Gwyneth Paltrow as Pepper Pots in Iron Man. J. Michael Riva was the film's production designer — the expert who oversees the integration of lighting, props and costumes to create the look of a film. Industrial Light & Magic/Marvel Entertainment hide caption 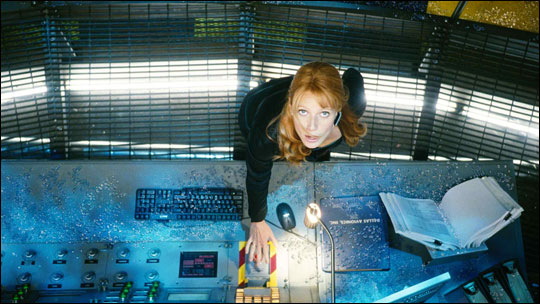 Gwyneth Paltrow as Pepper Pots in Iron Man. J. Michael Riva was the film's production designer — the expert who oversees the integration of lighting, props and costumes to create the look of a film. 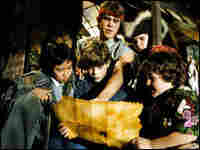 For a prop map in the film The Goonies, Riva cut his own finger and drizzled blood on the paper to help create an authentic look. Courtesy Amblin Entertainment hide caption 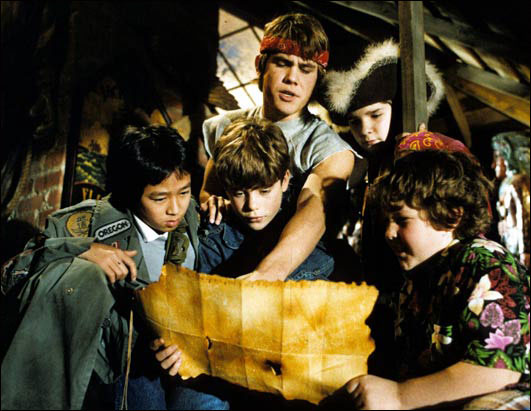 For a prop map in the film The Goonies, Riva cut his own finger and drizzled blood on the paper to help create an authentic look. 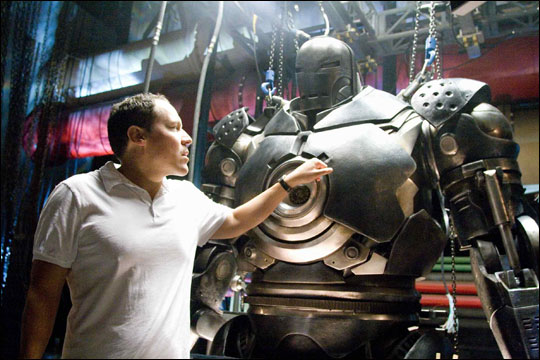 Director Jon Favreau on the set of Iron Man.

The director of Iron Man talks about what it takes to put a film together.

Favreau on working with production designers.

Favreau on why the editing room is the "center of gravity."

To learn about other unusual Hollywood jobs, listen to Susan Stamberg's pre-Oscars stories from the past three years.

But he did have a list of sets and plot points. The first item on the list read: "Tony, in the Iron Man armor, pukes in a toilet."

As production designer, Riva is responsible for the look of the toilet — to make sure it fits with the look of everything else in the film and doesn't stick out.

There are times when Riva likes to do hands-on work.

In The Goonies, a beloved 1985 children's film, the kids go in search of lost treasure. The prop people had made a treasure map, but Riva thought it looked too new. Already on location, he spent the day in a hotel room dumping coffee on it. He wanted it to be speckled with blood as well, but the small town where they were filming didn't have paint.

"So we actually had to cut our fingers and edge the sides of it with blood," Riva explained. "You do these crazy things. You get so into it."

The director of The Goonies, Richard Donner, also did Lethal Weapon with Riva. Donner knew Riva's father, Broadway set designer Bill Riva, who would re-design his son's bedroom in a different motif each year. The year Donner met Michael, Bill Riva had made his room into an American desert scene — complete with sand dunes, cactus and tents.

"Imagine that inspiration and that creative push so early in life," Donner said.

Another source of inspiration was Riva's grandmother, Marlene Dietrich. They adored each other and went to the movies together every Sunday. The production designer-to-be learned a lot from Dietrich. For instance, she never really had a full head of hair, Riva said. The famous director Joseph von Sternberg was an expert at lighting her from behind, creating the illusion of a giant golden mane.

Lighting, props, sets and costumes all contribute to the "look" of a movie — the "planned visual narrative," Riva calls it. In the 1992 film A Few Good Men, actors Tom Cruise and Demi Moore play antagonists, trying to make amends over dinner. Riva had to decide where to shoot the scene. He found inspiration in a lobster restaurant, where diners used mallets to smash open claws for meat.

"It struck me," Riva said, "that this was the perfect thing to do — because she's angry at him, he's angry at her, and they're doing to the lobster what they'd like to do to each other." Director Rob Reiner agreed.

Donner says production designers can bring a fresh perspective to pre-production, while a director can sometimes feel restrained by what they've read in the screenplay. For the 1976 film Superman, Donner credits production designer John Berry for coming up with the perfect location for Lex Luthor's villainous headquarters — an imaginary lair below Grand Central Station born from Berry's imagination.

But there are times when even the best production designer can go astray. On Lethal Weapon 2, Donner and Riva had very different ideas about the look for an evil ambassador's office. Donner saw it as somber, gray and foreboding. But when he came in the morning, ready to shoot, the set was Pepto-Bismol pink.

Riva sent over a crew of painters, and Donner went to get coffee. When he got back, Riva said, "Don't anybody touch the walls." The new gray and somber-colored paint was still wet.

As the director, Donner won that argument. But he's also the first to admit he can't win without the help of the production designer — the one who takes the work of the cinematographer, the costume designer, the set, prop, lighting people and so many others to weave the magic look of every movie you see.