Accessibility links
Lady Writes The Blues: The Life Of Rose McCoy Rose Marie McCoy is one of the most prolific songwriters of '50s American pop music, yet her legacy remains relatively unknown. During her career, the artist published more than 800 songs, some of which were recorded by the likes of Elvis Presley, Dizzy Gillespie and James Brown. 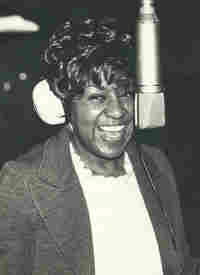 McCoy in the studio circa 1984. The songwriter currently resides in Teaneck, N.J. Courtesy of the artist hide caption

Tryin' To Get To You

Trying To Get To You 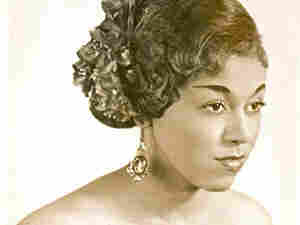 Rose Marie McCoy circa 1946, 12 years before her first big hit, "Trying to Get to You." Courtesy of the artist hide caption

In the 1950s and early '60s, American pop music became a meld of different genres — rhythm and blues, country and mainstream pop. The result beckoned in a new era of music and performance, synthesizing the tastes of blacks and whites, North and South. While Hollywood films like Cadillac Records and Dreamgirls have celebrated the performers and producers who created this music, considerably less exposure has been granted to the people who actually wrote it. One such example is Rose Marie McCoy, one of the most prolific songwriters you've never heard of.

Rose McCoy grew up on a farm in Arkansas. But at the age of 19, she left home and moved to New York City to try to become a singer.

"When I came to New York, I had six bucks," McCoy says. "I got a job working in a Chinese hand laundry and I learned how to iron shirts. Then I worked weekends in nightclubs, singing."

While she was waiting for her break as a singer, McCoy started to write songs, discovering that it came naturally to her. In the pop music world of the time, most performers relied on professional songwriters for their hits, and the entire songwriting industry was centered on one square block in New York City: 1619 Broadway. Better known as the Brill Building, the block housed a 10-story hit factory stuffed with songwriters, producers and music publishers.

After work, many of the employees would gather at a restaurant around the corner, called Beefsteak Charlie's. Soul singer Maxine Brown remembers that it was like a music marketplace.

"The place was hoppin'," Brown says. "Writers, they would run over and pitch their songs. Just right there on the spot, start singing it. And the verse would be on a napkin, and he'd reach in his pocket and the bridge could be on a brown piece of paper bag ... [A] lot of the songs that you heard back in the old days were sold right out of that restaurant."

McCoy had teamed up with a songwriting partner, Charlie Singleton. They set up their office in a booth at Beefsteak Charlie's.

"We'd write back there," McCoy says. "People got to know us so well, they used take our telephone calls. We'd meet there every morning, 6 o'clock, and buy a little glass of wine for 30 cents, and we'd sip on that.

"Around 4 o'clock in the evening, we'd call publishers," she says. "And the publishers used to come around there to see us. We didn't even have to go to their office. So they'd walk in the door and Charlie used to say, 'You can have real scotch now, 'cause they've got the money.' "

In 1954, McCoy and Singleton wrote a song called "Trying to Get to You," which was first recorded by a black vocal group called The Eagles. Elvis Presley heard their version in a record store in Memphis, and he decided to record the song on his debut album for RCA Records in 1955.

"Elvis did that just exactly like The Eagles, exactly," McCoy says. "Every breath, every sound, everything. Amazing how he did that. ... He wasn't a big star at that point, and we thought he was terrible because we thought he couldn't sing. We didn't understand, but we was grateful. Thank God for Elvis."

Presley's album spent 10 weeks at No. 1 on the pop charts.

Rock 'N' Roll On The Rise

That year, 1955, was a turning point in American music. Presley became an overnight sensation, and in Cleveland, DJ Alan Freed popularized the term "rock 'n' roll" on his radio show.

Like a lot of things in those days, music shows and dance halls were often segregated. But Maxine Brown remembers that more and more white teenagers were showing up to hear black performers.

"In order to get them both in the same building, they would put a rope down the middle — the whites on one side and the blacks on this side of the rope," Brown says. "And they were enjoying the same music; everyone was having a ball. You just didn't cross over the rope.

"They wanted to hear what you had," she adds. "And if they liked it, they didn't care if you was black or white. We thought it was the blues and they called it rock 'n' roll; I still don't know the difference."

One of McCoy's biggest hits came in 1961, with "I Think It's Gonna Work Out Fine." The song was recorded by an up-and-coming act, Ike and Tina Turner, and went on to receive a Grammy nomination. By that time, McCoy had bought a house and a green Cadillac. And she had her very own office in the Brill Building.

Over the years, she got offers to become a staff songwriter with Motown, Atlantic, Stax and other record labels. But she turned them down. Al Bell, the former head of both Stax and Motown, says McCoy liked her independence and wanted to keep control of her music.

"I mean, she realized at some point in time that her power was in the pen," Bell says. "And she was just one of those rare persons that wanted to be free to write her own songs and do what she wanted to do."

A Sea Change From Overseas

The 1950s and early '60s were the heyday of the professional songwriter in pop music. But in 1964, the music scene was about to change. That year, The Beatles had five of the 10 biggest songs on the Billboard charts. One was a cover of "Twist and Shout," but the rest were their own songs.

"People like Bob Dylan, et cetera, start emerging [and] perform their own songs," Bell says. "So they got recognition as a singer, but also a great writer. And literally I saw our industry, for want of a better way to put it, kick the songwriter to the curb, [and] Rose was just another songwriter."

"When the singers find out they can write for themselves," McCoy says, "they didn't want to see your song. They wanted to write their own songs."

As a result, the Brill Building songwriters had to find new ways to make a living. Carole King and Neil Diamond launched successful singing careers. Some became producers, while others left the music business.

McCoy kept working. In the '70s, she wrote and produced a jazz album with Sarah Vaughan. She branched out into country music, and even wrote jingles for artists such as Aretha Franklin and Ray Charles.

Now 86, McCoy lives in Teaneck, N.J., in the same house she bought in 1955 — the year Elvis had a hit with her song. The house is crowded with cardboard boxes, filled with reel-to-reel tapes, cassettes and old records.

"I keep all of my tapes," she says. "I got boxes of songs right there right now. I mean, boxes of songs. But I save them, 'cause there is a lot of good things in there: country songs, gospel songs, pop songs, every kind of song."

And she's still writing. McCoy says sometimes she wakes up in the middle of the night with a whole new song in her head.

"I had that happen, I think the night before last," she says. "I should've got up and wrote it down. But you say, 'What's the use? I'm retired now."

This story was produced by Joe Richman, Anayansi Diaz-Cortes, Arlene Corsano and Ben Shapiro of Radio Diaries. It was edited by Deborah George.