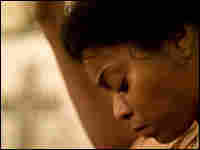 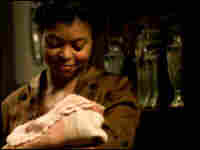 Henson bonds with "baby Benjamin" — an animatronic doll. One of the role's challenges, the actress says, was to convince herself that the doll was lovable, so the audience would think so, too. Merrick Morton/Paramount Pictures hide caption

Henson bonds with "baby Benjamin" — an animatronic doll. One of the role's challenges, the actress says, was to convince herself that the doll was lovable, so the audience would think so, too.

Taraji P. Henson talks about growing up in Washington, D.C.

Taraji P. Henson talks about working with an animatronic baby in Benjamin Button.

Actress Taraji P. Henson is up for an Oscar for her role in The Curious Case of Benjamin Button. She plays Queenie, who takes Benjamin in after finding the strange-looking infant on her doorstep and raises him through an extraordinary life.

Henson spoke to NPR's Michele Norris about how she brought Queenie to life on screen and how she shaped a character audiences could connect to.

Queenie, a hardworking woman who runs a retirement home in the 1920s, sees past Benjamin's odd exterior — despite the social expectations of her time.

"She knew from the moment she laid eyes on him that this baby was put on her doorstep for a reason," Henson said. "She believes every human deserves unconditional love. She was able to look beyond race in the early 1900s. She just knew he deserved life, and she wanted to give it to him."

Henson said director David Fincher had strong ideas about Queenie's character, but his hands-on style ultimately offered her the safety to experiment with the role.

"I love that he's as exacting as he is, because at the end of the day he's going to make a brilliant piece, and I'm going to look brilliant," she said. "When I trust my director, I can jump in with my eyes closed, feet first and I know he'll be there to catch me. I can be as uninhibited as I want, which allows the character to really breathe and live."

To develop Queenie's voice and body language, Henson said, she spent time "talking" to her character.

"Acting can be quite spiritual, because you're allowing your body to be used as a vessel for these characters," she said. "It's almost like a possession, really. After a while the character will tell you what they want to say and how they want to say it."

Queenie grows old through the course of the film, and Henson studied her 81-year-old grandmother to mimic the gait of an aging body.

"Wardrobe helps, too," she said. "I put that fat suit on and my body just automatically responded."

In addition to Benjamin Button, Henson stars in the recently released Not Easily Broken, based on the novel by T.D. Jakes. The film has not been as broadly distributed as the multiple Oscar nominee; instead it's being marketed to a largely black audience, a strategy that puzzles Henson.

"I don't go to the movies and say, 'Oh, this is a white movie, I can't relate to that. Let me stick to the black films,'" Henson said.

"I hope Hollywood can take a turn and stop labeling our films as black and white. Every human understands pain, love and tragedy — no matter what color you are."