Accessibility links
Call For Forensics Overhaul Linked To 'CSI' Effect According to a National Academy of Sciences report released Wednesday, viewers of the hit CBS show CSI — and even judges and lawyers — are under the impression that the science they see on the show is ironclad. In fact, experts say, while some forensic evidence, like DNA, is top-notch, other evidence is not nearly so reliable. 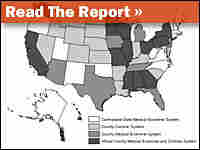 From The National Academies

Highlights From The Report

The congressionally mandated report from the National Academy of Sciences found "serious problems" in the state of forensics. The report, issued Wednesday, cites key deficiencies — such as the lack of mandatory certification programs for forensic scientists and the lack of standards for analyzing and presenting evidence. The study calls for new science research and major reforms to fix the fragmented, decentralized system.

With no central governing body and a lack of mandatory standards and certification processes, the practice of forensics is unregulated on a nationwide level and highly uneven. As a result, there is wide variability in forensic methodologies, reliability and types and numbers of potential errors.

The vast majority of criminal law enforcement is handled by state and local jurisdictions, yet these entities are often profoundly lacking in resources. Uneven access to analytical instruments, well-trained personnel and funding only adds to inconsistent forensic practices.

Limits On What Forensics Can Determine

Forensic evidence is often offered in court to "match" a piece of evidence to a particular person, weapon or other source. But with the exception of nuclear DNA analysis, the report says, no forensic method has been "rigorously shown to have the capacity to consistently, and with a high degree of certainty," demonstrate a connection between evidence and a specific individual or source.

Need For Clear Presentation Of Evidence

The report says judges should decide whether or not to admit forensic evidence based on two criteria: the scientific methodology used and the extent to which the forensic evidence relies on human interpretation. The report also points out the need to standardize and clarify the terms used by forensic science experts who testify in court. Some words commonly used — such as "match," "consistent with" and "cannot be excluded as the source of" — are not well-defined or used consistently, despite their impact on how juries and judges perceive evidence.

Millions of people watch CBS's CSI: Crime Scene Investigation every week. But forensic evidence isn't nearly as ironclad as it appears on television. In fact, according to a study released Wednesday by the National Academy of Sciences, the nation's crime labs need a total overhaul.

According to the report, CSI viewers are part of the problem: After watching blood spatters analyzed and carpet fibers tweezered night after night, there may be a sense out there that forensic evidence is infallible. The academy calls it the "CSI effect."

The NAS says studies show CSI viewers — and even judges and lawyers — are under the impression that the techniques they see on the show are science at work. They aren't.

"The quality of practice in forensic science disciplines varies greatly," says Judge Harry Edwards, a co-chairman of the NAS committee.

"Whether it is hair analysis, fiber comparison, bite marks, even fingerprints ... judges and juries hear this evidence and rely on it to come up with convictions that later have proven to be wrong," says Barry Scheck, one of the co-directors of the Innocence Project, which has helped get convictions using forensic evidence overturned.

That's one of the reasons the NAS report recommends an overhaul of forensic science. The committee says the U.S. should standardize tests and certify forensics experts. In addition, it wants to train technicians and supervise crime labs, and it calls for separating the science in a crime scene investigation from the police work. The committee also wants to create a new federal agency that would oversee all of this.

It is not clear how these proposed changes would happen. For one thing, Congress might not want to spend the money to create a new agency. And Congress might have trouble legislating local police practices from Washington.

Eugene O'Donnell, a former prosecutor who is now a professor at the John Jay College of Criminal Justice, says law enforcement across the country is so diverse that it would be hard for Congress to enforce forensic standards at a grass-roots level. What works for a two-man police force might not work in a big city, for example.

But O'Donnell does credit the report with getting a conversation going about forensic evidence and how to make it more scientific.

"This report offers an opportunity to start rethinking where science should be and where its proper relationship should be with law enforcement," O'Donnell says.

As a general matter, law enforcement has supported the NAS suggestions, with one exception: The NAS says crime labs should be independent rather than part of police departments or prosecutors' offices. Investigators say that could be a problem. Currently, a forensic examiner can tell police right away when a piece of evidence is useless, enabling investigators to return the crime scene while evidence is still fresh. O'Donnell says there is a balance to strike.

"When this system works best, you have a proper mix of independence, but you have law enforcement weigh in to provide context when the investigation is being pursued," he notes.

O'Donnell says it remains to be seen how that balance would be achieved if labs were independent. He compares it to going to a doctor's office and getting a blood test — the doctor sends it to an independent lab and it takes days to get results. Investigators often don't have the luxury of time if there's a criminal on the loose.