Accessibility links
Lebanon Moves To Downplay Religious Affiliation Lebanon is among the most religiously diverse countries in the Middle East, recognizing 18 different faiths. Religious or sectarian identity is an integral part of daily life, but the government is now allowing citizens to avoid being identified by sect. 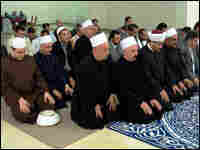 Muslim clerics pray at an interfaith service on Mount Harissa overlooking Beirut. Sectarian ties are paramount at key points in the lives of most Lebanese, but a new move by the Interior Ministry could change that. Peter Kenyon/NPR hide caption

Lebanon is among the most religiously diverse countries in the Middle East, recognizing 18 different faiths. Religious or sectarian identity is an integral part of Lebanese daily life.

But now the government is allowing citizens to avoid being identified by sect, which is raising some interesting questions.

Lebanon is known for its gorgeous scenery, vicious civil wars — and a byzantine, sectarian-based political system that seems perpetually on the verge of collapse.

Although most people in the country will insist that they are Lebanese first and Muslim, Christian or Druze second, at key points in their lives their sect is what matters most. On issues of voting, marriage, child custody and inheritance, the state is largely absent. So, when Interior Minister Ziad Baroud issued a memorandum allowing citizens to choose to have their religion removed from their identity cards, some here saw it as the start of a quiet revolution.

Lawmaker Mohammed Kabbani says sectarianism is Lebanon's curse, and it's getting worse. In the 1950s and '60s, he neither knew nor cared about his classmates' religion. Now, he says his children probably know the sect of everyone in their class.

"It is our main problem," he says. "Lebanon is moving more and more into a confederation of sects, rather than one people. This is a curse on the country. We are not — you see, if you ask somebody now, 'Who is that?', he will tell you, 'He is a Maronite or a Shiite,' and so on, and this is really too sad," he says.

Kabbani says Lebanon's best chance to create a nonsectarian secular government without inciting sectarian warfare was in the late '50s and early '60s, when Fouad Shihab, the first commander of the Lebanese army after independence, was president. Still, Kabbani says he is heartened to see a new generation taking up the challenge.

Jamil Mroue, editor of the Daily Star newspaper, worked for two years to strike the religious affiliation from his ID card. Now, the move by the Interior Ministry means the process will be much simpler. Mroue calls that a necessary condition for reform — but not sufficient.

"Because what we need to do next is to build — slowly, as in the proverbial sausage factory — a civic code," he says. "In a sense it will be an exoskeleton that allows the healing of the very, very, very rotten state system that has been eaten up by the sectarian virus."

A group called the Civil Center for National Initiative is trying to take the next step, gathering constitutional lawyers and other experts to prepare a report on how Lebanon might go about building a nonsectarian civil code, and empowering the institutions to support it.

On a blustery day in downtown Beirut, two middle-aged women consider the idea of removing their religion — Shiite, in their cases — from their identity cards. Fatim Fawaz speaks for both when she says without hesitation that of course she will remove it.

"We're very much for it, and we even encourage it because that means we can get rid of sectarianism in Lebanon," she says. "We used to live abroad, and we never even thought what our religion was or what our sect was. That was not an issue. It was only when we came back to live here in Lebanon that it became an issue."

Fawaz knows that some very powerful people are deeply invested in the current system, and they won't give it up easily. But, like many Lebanese, she's quietly cheering a small, rare step toward something that has long eluded this beautiful, battered country: a sense of national identity.