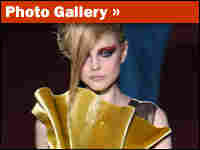 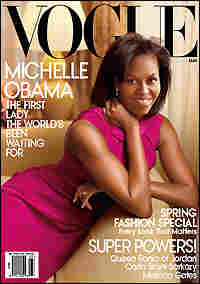 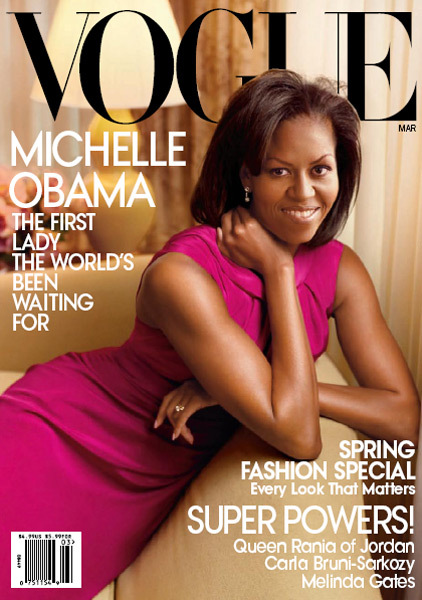 First lady Michelle Obama graces the March cover of Vogue. She was photographed by Annie Leibovitz at the Hay-Adams Hotel in Washington, D.C. 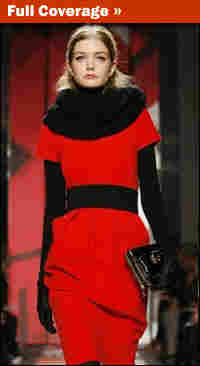 "Style can be a place where you can be exuberant," Singer tells Morning Edition's Ari Shapiro. "In tough times, why not express yourself by how you dress — whether you're doing it from what's in your closet, what's in a vintage store [or] what you made yourself?"

Singer has been taking in the shows of New York Fashion Week, and she says the designs on display celebrate both fantasy escapism and depression-era chic. (See a gallery.)

"We've seen people playing it very safe, but we're also seeing shows that are really about making a statement on the runway," says Singer. "I'm most inspired by shows like that because what we need now is a jolt. We need fashion to be really fun and really exciting."

Singer also notes that many of the great movements of fashion and style, like punk, grew out of periods of economic hardship. Many women in New York these days have taken to wearing menswear — like a jacket with lace-up shoes and a striped shirt — and wearing it well, Singer says.

Singer says one person who can have "a profound influence" on what consumers wear and what they buy is first lady Michelle Obama, who appears on the March cover of Vogue.

"She's the most wonderful icon for us to have, in a way, because she's not someone who ever sought it out," Singer says. "This not a woman who's put herself forward as a fashion icon — she's a woman who's an icon for all the right reasons."

"She wears clothes that she looks good in, that fit her life, and in doing so inspires us all to think about ways that we can do that with clothes for our lives," Singer says.