Accessibility links
The Kaldirons: Chicago's Forgotten Finest On "To Love Someone," the obscure Chicago group gives a sweet soul performance that easily holds its own next to anything other local groups (like the Impressions or Dells) could boast. Delivered in a striking falsetto, the truism "It's no good to love someone who don't love you" oozes heartache.

To Love Someone (That Don't Love You) 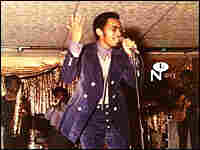 Chicago's Twinight imprint coexisted with scores of regional soul labels that sprang up during the 1960s. Like many, Twinight wasn't long for this world, lasting from roughly 1967 through 1972. However, during its lifetime, Twinight boasted — single for single — one of the strongest and most consistent catalogs for any R&B label of its era. Long overlooked save for a handful of tracks, Twinight finally receives the spotlight it deserves thanks to the comprehensive Twinight's Lunar Rotation anthology. (Numero Group intends to reissue the entire Twinight catalog of seven-inch singles on vinyl, with original label art.)

Of the 40-plus songs that dot this set, The Kaldirons' "To Love Someone (Who Don't Love You)" is first among equals, the product of a group formed at Harlan High School on Chicago's south side. Unfortunately for the group, "To Love Someone" ended up becoming one of Twinight's most obscure singles, with purportedly less than 500 copies ever distributed. This failure is hard to reconcile against the song itself: In short, "To Love Someone" is a monster of a ballad.

Produced by Jimmy Jones (best known for his collaborations with blues/R&B singer Syl Johnson), the song opens with a sweeping string arrangement. Strings are tricky to master in soul music: The right amount lends an important emotional weight, but an overabundance can overwhelm a song's delicate textures. Jones, like his counterpoint across town at Chess (the great Charles Stepney), nails that ideal balance. Even before The Kaldirons' vocal harmony glides in, "To Love Someone" already has the feel of something epic.

From there, the group gives a sweet soul performance that easily holds its own next to anything other Chicago groups (like the Impressions or Dells) could boast. Delivered in a striking falsetto, the truism "It's no good to love someone who don't love you" oozes heartache. Given the chorus' catchy arrangement, listeners shouldn't be surprised to find themselves singing along with every note — or at least trying to hit those upper octaves.

"To Love Someone" does leave a slight bittersweet aftertaste: In being witness to such grandeur, it's only natural to wish that the group had released more songs. Still, if it was destined to only release this one single, at least The Kaldirons made the most of it.