Accessibility links
Removing His Tattoos, But Gang Scars Remain Gabriel Hinojas spent more than half his life in a Los Angeles gang, but he's decided to quit. He's even having his gang tattoos removed. But still he worries that his young son will end up following in his earlier footsteps. 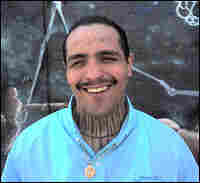 Gabriel Hinojas, 26, has spent almost half of his life in a Latino street gang. Now, he's opting out, and having his tattoos removed, including the name of the gang stamped on his forehead and neck. Rob Schmitz, KQED hide caption 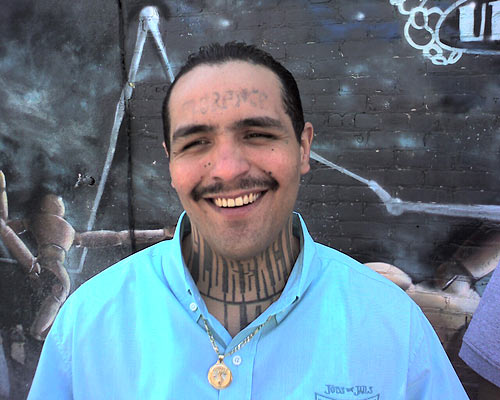 Gabriel Hinojas, 26, has spent almost half of his life in a Latino street gang. Now, he's opting out, and having his tattoos removed, including the name of the gang stamped on his forehead and neck.

The city of Los Angeles has recently announced a new anti-gang initiative that will focus on giving teenagers work opportunities as an alternative to joining a gang.

Gabriel Hinojas could have benefited from such a program. He's 26 years old and has spent almost half his life in a Latino street gang. After his last stint in prison, Hinojas made a big decision: He was going to leave the gang and try to be a good father.

For Hinojas, one crucial step on the way to changing his life is a stop at the laser tattoo-removal office.

The doctor asks him which tattoo he wants removed first.

"Wherever you see any ink on me, doc," Hinojas replies.

Black gothic letters make up the word "Florencia" across his forehead. This name, his former street gang, is also tattooed along the entire front side of his thick neck. It's a menacing look.

For Hinojas, these tattoos are reminders of a chaotic and disturbing life — reminders he wants erased.

Hinojas' abusive, drug-addicted father abandoned him and his mother when he was 14. Soon after, Hinojas ran away and joined the Florencia gang in South Central Los Angeles. He bought a gun, and started selling — and smoking — crack. And then he tried to break into his crack dealer's car.

"I felt like a crackhead, I felt like a basehead, you know, so I went back and got the gun, clocked the back and shot the house up, shot the front door," Hinojas says. "Lucky I didn't hit nobody, because I wouldn't be talking to you."

A judge sentenced Hinojas to two years in prison. He got out on parole three years ago, and he now lives in East L.A. with his family.

He and his wife Sandra, along with their four children, live in this tiny two bedroom apartment in a neighborhood patrolled by Latino gangs. Hinojas does administrative work for Homeboy Industries, a nonprofit whose goal is to reform gang members.

But living the straight life is challenging.

"Lately, we haven't been shopping, because we're paying bills," he says. "But it's hard, it's a responsibility having four kids."

It's hard, but it's worth it. Hinojas' face lights up as he dreams of a life that many would consider routine.

"I want to pull out of my driveway, go to places in the suburbs with the family, feed the dog, maybe I forgot to feed the dog, that's what I want. You know what I mean?"

But on the path to this new life, he's learning something: Parenting children who, up to now, haven't had a responsible father in their lives, is very difficult.

From his living room couch, Hinojas tries to calm down his first-born son, Junior, who's fighting with his older sister. Junior has a violent temper and bullies other kids. In the past year, Sandra caught Junior flashing gang signs from her car.

This might not be so shocking if it weren't for his age: Junior is 4 years old. Sandra is worried about him.

Hinojas silently gets up and walks out of the apartment, resting his arms on the outside balcony. This topic is clearly a sore spot for the young couple.

A few minutes later, he comes back in to deal with another one of Junior's tantrums. Hinojas says the only way to calm the boy down is to sit him in front of his favorite video game, called Driver, which allows Junior to shoot people on screen.

"That's the only way he can stay there — the only way," Hinojas says. "And Daddy always gives him his way. I got to."

Hinojas knows his wife hates this game, but he has a hard time saying no to his kids. He doesn't want to be like his parents.

"But like right now, I give him his way, because I never had ... they (my parents) used to be strict on me," Hinojas says. "I want to give him the things I never had, you know what I mean?"

Back at the tattoo removal office, a doctor is finishing up a procedure to remove "Florencia" from Gabriel's forehead. It's now red and puffy, and the tattoo's still there. It'll take six more visits over the next couple of years to completely erase it.

But as the tattoo vanishes, Gabriel's scared the lifestyle that it symbolizes will return — through his son — and it's going to take more than a laser to remove it.