Accessibility links
The Gritty Gangsters Of 'Gomorrah' Matteo Garrone's epic film Gomorrah takes us into the world of the Camorra, an organized crime syndicate based in and around Naples. John Powers has a review.

Listen
The Gritty Gangsters Of 'Gomorrah' 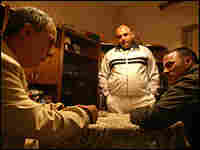 Ever since the Roaring Twenties, American movies have been in love with organized crime. Our pop culture not only finds gangsters colorful and supremely quotable — bada bing! — but it often flatters their thuggishness by endowing it with tragic grandeur. "The Godfather made our life seem honorable," said Sammy "The Bull" Gravano, adding that Francis Ford Coppola's movie inspired him to kill even more people.

Of course, Americans can mythologize Don Corleone or Tony Soprano because, for most of us, their activities feel safely distant. They exist as stories rather than living presences. But things are different in Italy, where everyone feels the reach of the mafia, whose power touches everything from their trash pickups to the highest offices in the land. Because of such proximity, the best Italian stories about the mafia — for instance, Leonardo Sciascia's brilliant novels about Sicily — are resolutely unromantic. They never get all sentimental about family.

Nowhere is this clearer than in the new Italian movie, Gomorrah. Directed by Matteo Garrone, this crime epic takes us into the world of the Camorra, a syndicate based in and around Naples that, despite being little known here, is actually bigger than Sicily's Cosa Nostra. Watching the Camorra in action, we see how organized crime can become every bit as crushing as a totalitarian government.

Beginning with several murders — for the whole system runs on bloodshed — Garrone's film interweaves several characters' stories. We follow a frightened a mob bagman, a 13-year-old kid who joins the Camorra, a tailor who's teaching illegal Chinese workers the tricks of high fashion couture. The deadliest is the most respectable: a sleek, silver-haired fixer who arranges for businesses to dump toxic waste in fields where it poisons those living in the communities nearby.

As we follow the action, we start to grasp the globalizing power of the Camorra, which deals in everything from trafficked humans to the designer clothes the movie shows Hollywood actresses wearing on the red carpet. More importantly, we get a harrowing sense of what it means to live under mob control. The Camorra poisons everything it touches, and in parts of southern Italy, it touches everything. Shot on location, the world of Gomorrah is one of pervasive corruption, violence and fear, a world of harsh landscapes and dire housing projects that seem less a physical geography than a moral hell.

Gomorrah is based on a powerful book of the same title that's available here in paperback. It was written by an ambitious young Neapolitan journalist named Roberto Saviano, who witnessed his first murder when he was 13, and saw his own father badly beaten because he called an ambulance for one of the mob's victims. Fueled by righteous anger, Saviano did undercover reporting on the docks and at an illegal textile factory, and even waited tables at Camorra weddings. The result was a passionate, highly personal expose whose visibility annoyed the mob's bosses, who are evidently not avuncular old fellows like Marlon Brando. These dons issued their version of a fatwa back in 2006, and three years later, Saviano, just 29 years old, is still living a life of bodyguards, armored cars and safe houses.

While Saviano's book burns hot — he's implicitly his story's crusading hero — Garrone's approach is cool, detached and almost anthropological. He knows that, in a movie, Saviano's feverish style would make Gomorah exciting in the wrong way — turn it into operatic melodrama or pulp fiction. Featuring no heroes, Garrone's movie is pointedly anti-mythological, never more so than in its treatment of murder. Gomorrah is actually far less violent than The Godfather or Goodfellas, but it seems more brutal, for Garrone offers no cinematically cool deaths, and nobody softens the blow with catchy lines about killing not being personal, only business.

Highly conscious of how it portrays the mafia, Garone's film serves as a useful antidote for those of us who watch and love movies that transform murderers into mythic figures. One of the storylines follows two dumb punks — Marco and Ciro — who like to quote lines from Scarface. The two run giddily wild, in hopes of living large just like Al Pacino's Tony Montana. I won't spoil things by saying what happens, but their story underscores one big difference between Garrone's movie and Hollywood gangster pics: Marco and Ciro watched Scarface and wanted to be him; nobody who sees Gomorrah would ever want to be Marco or Ciro.