Accessibility links
Robyn Hitchcock: An Oddball In 'Oslo' He's best known for his bizarrely comic songcraft and most recently for his role as the white-haired troubadour of Rachel Getting Married. Still a prolific recording artist, Hitchcock plays from and discusses his new album, Goodnight Oslo.

Up To Our Nex 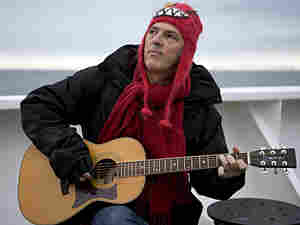 Robyn Hitchcock is perhaps best known for writing songs like "My Wife and My Dead Wife," or "The Man With the Lightbulb Head" — songs alternately bizarre and comic. Or, if you don't know his music, you might remember him as the white-haired troubadour in the recent film Rachel Getting Married.

Hitchcock has been at it since the 1970s, when he cut records with his first band, The Soft Boys. Now well into his 50s, Hitchcock lets his dark undercurrent bubble closer to the surface of his songs, while his broad silliness has morphed into a subtler, more low-key sense of humor.

"I think it's only a dark undercurrent if what's on the surface is bright," Hitchcock says. "If my stuff was very, very gloomy on the surface you'd probably find it hilarious underneath. ... It just sort of depends — doesn't it? — on what hits you first."

Hitchcock has a new album out called Goodnight Oslo, featuring his longtime collaborators in The Venus 3: Peter Buck and Bill Rieflin of R.E.M., and Scott McCaughey of The Minus 5. Hitchcock recently sat down with music critic Christian Bordal to talk about it and play a couple of the new songs.