Accessibility links
Beautiful Lilacs Tell a Tale About Climate The fragrance of a lilac is so powerfully stirring that, within a century of their introduction in the United States, the blooms were synonymous with "home." But these nonnative shrubs have a great deal to say about how our climate is changing. 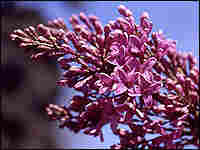 The lilac's easy-to-read life cycle makes it a good plant for observing changes in the environment. Mark Schwartz hide caption

Start Your Own Budburst Investigation

Want to help track climate change? Project Budburst's downloadable activity-guide will walk you through six simple steps to become one of its amateur naturalists. 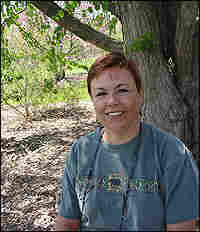 Karen Delahaut works for the University of Wisconsin in Madison, but her avocation is phenology. Ketzel Levine hide caption 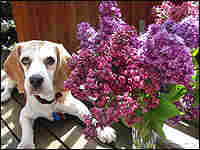 Lilacs -– like these first cuttings in Portland, Ore. — bloom in the Northwest for at least twice as long as they do in the Midwest Ketzel Levine/NPR hide caption 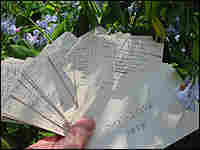 A sampling of the meticulous notecards kept by Madison, Wis., phenologist James Zimmerman. His widow, Libby Zimmerman, has 50 years worth of his observations. Ketzel Levine/NPR hide caption 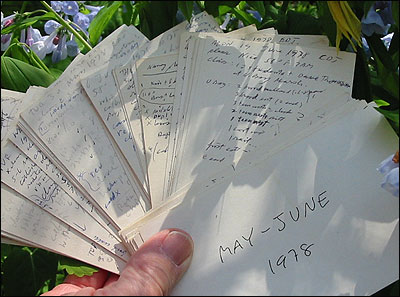 A sampling of the meticulous notecards kept by Madison, Wis., phenologist James Zimmerman. His widow, Libby Zimmerman, has 50 years worth of his observations.

Heads up, you backyard botanists. Take a look at your region's native plants. Are the bloodroots budding? The saguaro cactus blooming?

If so, Project Budburst needs you. The online "citizen science" campaign collects data about native plants. All you have to do to play is observe. Whether it's the first leaf of an aspen or the first bloom of an evening primrose, note the date, head for the Web site, and presto! You're an instant phenologist.

Phenology, the ancient art of tracking annual phenomena such as plant blooms and bird migrations, is now a crucial tool in tracking the Earth's warming. It can be as simple as smelling a lilac.

I hope you can imagine the fragrance of a lilac. If you've forgotten its scent, get to a nursery, quick! It's so powerfully stirring and reassuring that within a century of their introduction here, lilacs were synonymous with "home."

These nonnative shrubs also have had a great deal to say about how our climate is changing.

It all started in the 1950s, when Bozeman, Mont., professor Joseph Caprio used the lilac's bud and bloom times to map the advance of Montana's spring. By the 1980s, an entire lilac network stretched across the country. That network later morphed into the National Phenology Network, parent to Project Budburst.

But enough talk! On to Madison, Wis., where Karen Delahaut awaits us in a very purple field.

Delahaut's real job here in Madison is at the university as a farm-to-market specialist. She'd make a great professor of phenology, too, except it's not a "capital S" science. Without cracking open a book, you've already got what you need.

You start with a plant like the lilac, which has an easy-to-read life cycle. Then you record five very specific life events: first leaf, full leaf, first flower, full bloom and past bloom.

"Those are the times when I pull out my notebook and scribble in the dates," says Delahaut, who has been collecting data for 10 years. "I can then see from year to year to see if there's a trend to earliness. And it's definitely getting earlier."

She's right. Observations based in part on decades of lilac data now indicate that spring is arriving 6.8 days earlier in the Midwest than when Professor Caprio first began counting lilac buds.

It's not just plants that speak to time and change. Insect hatching is a phenological event. For that matter, so is the first whiff of skunk. Delahaut has a grocery list of nature's great phenological moments.

"Earthworms coming on the sidewalk indicate that the ground has thawed. ... The first firefly flashing, which is typically sometime in July here in Wisconsin … "

Then there's the first cricket chirping, which points to more than just summer. It turns out, the cricket's chirp speed can help you tell the temperature.

Phenologists didn't set out to track climate change. Take a naturalist like Aldo Leopold, who lived in Madison and kept meticulous records for the love of the natural world. His student and neighbor, James Zimmerman, hadn't a clue what his own records might one day reveal. But with a pencil stub in one pocket and index cards in another, he scribbled his observations in near hieroglyphics – his notes look a lot like the foot scratchings of a bird.

"June 27th 1978," says one of his cards, which takes an expert eye to decipher. Perhaps no one's more expert than his widow, Libby Zimmerman.

James Zimmerman died in the early 1990s, leaving behind 50 years of priceless observations as well as a philosophy of life, paraphrased this way by Libby Zimmerman:

Just outside Madison, at an organic farm called JenEhr Family Farm, Kay Jensen describes how observation has been helping farmers – even the skeptical ones – grow crops for centuries.

"The dandelions were out last week, and my husband Paul and I were talking," Jensen recalls. "He thought the temperature wasn't yet warm enough to start planting beans."

"And I said, 'No, I think we're ahead of time. The dandelions are up, so I think you should go check.' Sure enough, he went out into the field, put the thermometer in the ground 6 inches down. We were well above 50 degrees, so we planted beans yesterday!"

Much of the folk wisdom stretching back centuries is about using observation and phenology to predict the life cycles of plants.

"When elm leaves are big as a penny," one goes, "you must plant kidney beans if you mean to have any." And, of course, everyone knows that corn should be knee-high by — you guessed it — the Fourth of July.

With spring coming earlier, who knows what the new folklore will be.

"There is other music in these hills," Leopold wrote, "... by no means audible to all ... it notes the lives and deaths of plants and animals, its rhythms spanning the seconds and the centuries."

Back home in Portland, Ore., the lilacs have stopped singing. As a budding phenologist, I'd like to report that my neighbor's lilac is 100 percent past bloom.