Accessibility links
Guns From U.S. Play Key Role In Mexican Violence Smuggling between the U.S. and Mexico is normally seen as a one-way street — the influx of drugs into America. But increasingly, authorities are noticing that guns and ammunition, which are feeding the drug and gang wars in Mexico, are crossing the border, north to south. 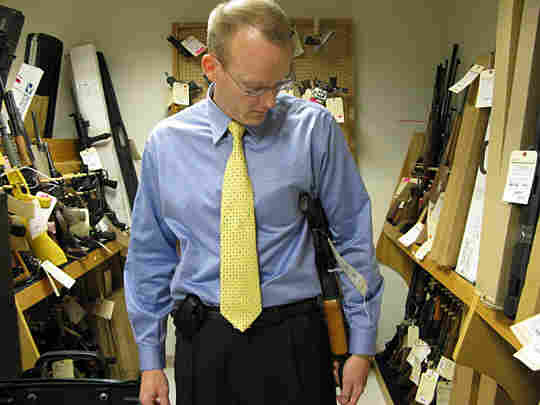 Special Agent Bill Newell shows how an AK-47 knockoff with a sawed-off stock can be hidden under a coat. Ted Robbins/NPR hide caption 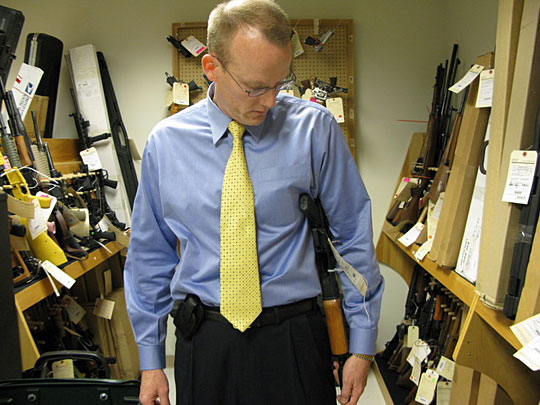 Special Agent Bill Newell shows how an AK-47 knockoff with a sawed-off stock can be hidden under a coat.

A 50-caliber rifle and an AK-47, recovered by agents, in a gun vault at the Bureau of Alcohol, Tobacco, Firearms and Explosives in Phoenix. Ted Robbins/NPR hide caption 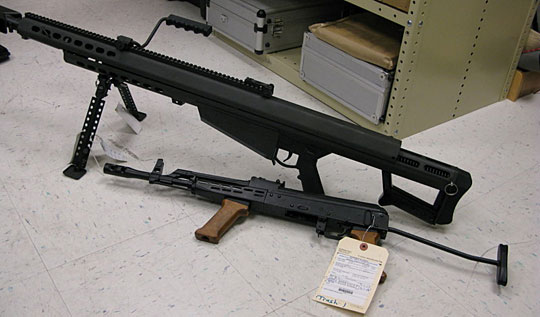 A 50-caliber rifle and an AK-47, recovered by agents, in a gun vault at the Bureau of Alcohol, Tobacco, Firearms and Explosives in Phoenix.

Though one direction usually gets most of the attention, smuggling between the U.S. and Mexico is actually a two-way street.

Drivers headed south toward the border pass a welcome sign — "Bienvenidos a Mexico" — and another sign, warning in both English and Spanish: "No firearms or ammunition." Two customs inspectors talking on cell phones wave cars through a barrier with no questions and no inspection.

More than 5,000 people were murdered in Mexico last year alone, according to the Bureau of Alcohol, Tobacco, Firearms and Explosives, and 95 percent of the weapons recovered from those killings were traced back to the U.S. That's largely because it's easier to buy guns in the U.S. and smuggle them across the border than it is to get them in Mexico.

"I'll tell you something with all due respect: The problem of violence in Mexico starts in the United States when someone buys a weapon, and their intent is that it's going to Mexico," says Abel Murrieta-Guttierez, attorney general of the Mexican state of Sonora.

Back in Phoenix, Newell is in a walk-in vault loaded with weapons seized 120 miles north of the border. The vault is filled with hundreds of rifles in wall racks, handguns in stacks and semi-automatics wrapped with plastic ties to prevent their firing. This is just one of a number of ATF vaults in Arizona filled with weapons that will be destroyed and then replaced with newly seized weapons. Newell points to a trash can filled with AK-47 knockoffs.

"These guns were actually seized in Phoenix from some traffickers that were going to take them to Mexico," he says. "Actually this case was one of about 30."

Newell has worked with the Mexican government to stop weapons trafficking, and a representative from the Mexican Justice Department has a desk in the Phoenix ATF office. Newell says the guns are coming from all over the U.S, though. The weapons and ammunition are being bought on the black market and at gun shows, but mostly from licensed dealers. Arizona and Texas make it especially easy to buy guns retail. Basically, any adult with a valid ID and no criminal record can buy as many as he or she wants.

Form 44-73 is a five-page document the federal government uses to screen purchases. It's a felony to lie on the form, but it's also illegal to buy a gun for someone else. And that's what happens: Smugglers hire people to make straw purchases.

Signs Of A Smuggler Purchase

Dave LaRue, who owns Legendary Guns, a shop in Phoenix that sells everything from Old West antiques to modern firearms, says a real tip-off that a gun may be smuggled is if the buyer tries to use cash, avoiding a financial trail.

"There are plenty of signs," he says. The buyers "don't understand how the gun works. They don't know what the gun is. They come in and point at it and say: 'I'll take that gun.' It's so unusual for somebody to buy an expensive gun and pay for it in cash, and quite often with small bills, that you just think that this can't be right."

LaRue says he and his employees have seen the pattern often enough to refuse to sell if they see anything suspicious. They work closely with the ATF. Others are not so careful. Another Phoenix gun dealer is about to stand trial on charges he sold 600 weapons he knew were headed to the Sinaloa drug cartel in Mexico.

U.S. agents occasionally seize weapons at the border. At the Nogales Port of Entry, Customs and Border Protection Supervisor Christopher Larkins says agents recently found some hidden in the hollowed-out insulation of a refrigerator unit in back of a pickup truck.

Authorities call the weapons smuggling trafico de la hormiga, or "ant traffic," because it's done in small steady shipments to avoid detection. And after all, the main mission of the customs service is not examining vehicles leaving the U.S.

"Our primary responsibility is inspecting the traveling public entering the United States," Larkins says. "That's what one of our bigger threats are. When resources allow, we do the outbound."

So what can be done to halt the flow of guns south? Last year President Bush signed the Merida Initiative, which provides training, equipment and intelligence to Mexico. President Obama recently vowed to do more. Meanwhile, nearly 8,000 guns sold in America last year were traced to Mexico. That was more than double the number the year before.