Accessibility links
Whistling Orangutan Impresses Zoo Researchers Bonnie, an orangutan at the National Zoo in Washington, D.C., has taught herself to whistle. She seems to have learned by watching zookeepers who whistled as they worked, a feat researchers say may help lead to a greater understanding of how human speech evolved. 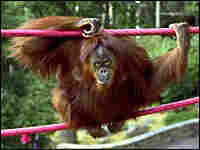 Bonnie, an orangutan at the National Zoo in Washington, D.C., has learned how to whistle, a feat zookeepers say she learned by being around humans. Jessie Cohen/NZP hide caption 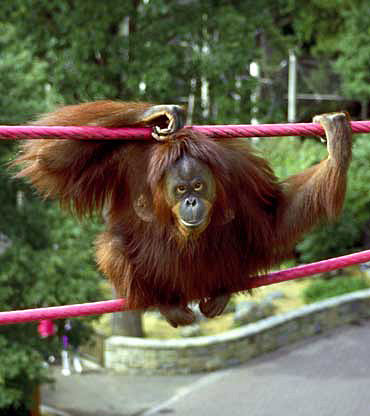 Bonnie, an orangutan at the National Zoo in Washington, D.C., has learned how to whistle, a feat zookeepers say she learned by being around humans.

Bonnie At The National Zoo

At the National Zoo in Washington, D.C., Bonnie the orangutan has been amazing researchers with her special talent: Bonnie knows how to whistle.

Those notes are a symphony to the ears of primate researchers who believe her musical abilities could lead to a greater understanding of how human speech evolved.

"I think what makes it significant is that you can train apes to whistle, but no one trained her to do it. She decided to do it on her own," says Erin Stromberg, who works in the National Zoo's Great Ape house and helps care for the orangutans.

Stromberg helped publish a recent paper on Bonnie's talents. Researchers believe Bonnie was trying to imitate the sounds of zookeepers who whistle while they work. Stromberg says Bonnie's ability to copy that sound is powerful evidence that apes can re-create the sounds of other species.

"So what's significant about Bonnie learning to whistle is not that she's able to do it, it's that she saw someone else do it and just picked it up," Stromberg says.

Bonnie is 32 years old, with dark orange hair and a big round belly, and weighs in at a svelte 140 pounds. She lives in a concrete enclosure with plenty of things to climb up and swing down. A large window allows spectators to look in, and Bonnie to look right back at them.

Bonnie has been mimicking her zookeepers' movements for years. She likes to sweep the floors and wash the windows, although she uses dirty rags to do it.

When she started whistling, researchers decided to test her gift for mimicking sounds. They asked Stromberg to whistle basic patterns to see whether Bonnie could copy them. It turned out to be easier for the ape than for the human — Stromberg isn't a great whistler — so the researchers kept it simple.

"I would give a long whistle, and would she then in turn imitate me? Or if I do a short whistle, would she do a short whistle? And she would," Stromberg says. "She was pretty good at following what I was doing. I think what makes it significant is that she decided to do it on her own. Something made her want to whistle, or at least try it out. And so to me, she was challenging herself to do something else."