Accessibility links
2 Teen Girls, Injured By Train, Cope With Change Last May, teenage girls Destiny Phaneuf and Rachel Brown fell asleep on the train tracks in Lebanon, Maine. The train couldn't stop in time to avoid them. Both girls suffered amputations — and now they are dealing with the aftermath of a terrible mistake. 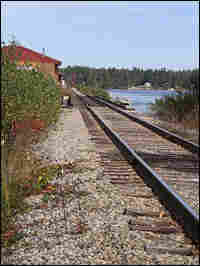 Last May, when they were in eighth grade, Destiny Phaneuf and Rachel Brown skipped school and fell asleep on tracks in Lebanon, Maine. They were hit by a train. Suzi Piker for NPR hide caption 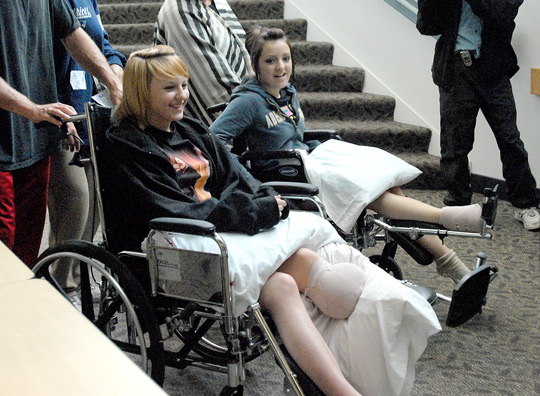 Destiny (left) and Rachel leave the Maine Medical Center in June. Both girls had amputations.

On the morning of May 28 last year, Destiny Phaneuf and her best friend, Rachel Brown, knew one thing: They didn't want to go to school.

The two eighth-graders were tired. They had stayed up pretty much all night. And sometime between surfing MySpace and sneaking outside to the trampoline, they hatched a plan. Instead of getting on the bus, they would walk down to the train tracks near Rachel's house in Lebanon, Maine, and spend the day outside, out of sight.

"It's not like it's such a bad thing that we go on [the tracks], because everyone does," says Rachel, who was 14 then. "Like people every day go on those tracks — go jumping off of it, they go in the water, sit on there and go fishing. It's not, like, out of the blue."

The girls lay down between the train tracks — Destiny, who was 13 at the time, on her right side and Rachel on her left side. They put their heads on Rachel's bag and fell asleep.

"We were like wicked tired and we didn't really mean to," Destiny says. "But we were just laying down and talking and everything."

"We didn't really mean to fall asleep," Rachel chimes in.

Destiny says that they're heavy sleepers anyway, but they were extra tired.

So when the train came, the conductor and the engineer laid on the brakes and horn and the girls didn't move, according to Lt. Gary Fecteau with the York County Sheriff's Office.

"I think there was an exchange between the two of them: 'Oh, I think it's towels.' 'Oh, my God, no — there's people on there,'" Fecteau says. "They could see what was going to happen and they did everything they possibly could, but you just can't stop a train like you can a car."

The train hit the girls.

"I was crawling on my hands and knees out from underneath the train and I tried to run," Rachel says. "I forgot that anybody was there. I forgot why I was there. It all came back to me so fast. I crawled back under and was like, 'Destiny, Destiny get up.'"

"I couldn't understand. The only thing I could understand was really pain," Destiny says. "Like, that's what hurt the most was the wind."

"When your bones that have never touched the air touch the air, it's like putting a Popsicle on your bottom teeth," Rachel says.

"Except for times a million," Destiny says.

News of the accident spread fast, and there were more questions than answers: There were two teenage girls struck by a freight train? How did they survive? And why didn't they feel the vibrations or hear the whistle? Was it a suicide pact or a teenage game of chicken?

But when the police finished their investigation, they backed the girls' story: They fell asleep on the tracks.

Both girls suffered amputations. Rachel lost most of her right foot, and Destiny lost her left leg below the knee. They were airlifted to Maine Medical Center in Portland for immediate surgery.

"When I woke up, Rachel came in her wheelchair and, like, the first thing she said was 'I love you.' And I was, like, 'I love you, too,'" Destiny says. "My mom told me I lost a leg, and it didn't really go through my mind. It didn't really go through my mind for, like, a month. I was like, 'Whatever, I lost a leg, it will grow back.' And then I was like, 'Wait a minute. No, it won't.'"

"It was definitely an adjustment when we came home," Del Santo says. Destiny "kind of hibernated in her room because she [didn't want to] fall. When she wanted something, she would yell for me — like in the hospital. Destiny is not good with change. She has a hard time with it — it takes her a while."

On a Saturday in late September, months after the accident, Destiny searched for her favorite T-shirt with Marilyn Manson on it. She hopped from the kitchen to the family room on her good right foot and asked her mom where it was. Destiny has come a long way from hibernating in her room, but getting around — just moving from place to place — is a struggle.

"Everything has changed. Even to the smallest thing," Del Santo says. "Any normal kid would get up and if they're thirsty, they go get a drink. She can hop to the refrigerator, she can open the refrigerator, she can hold the refrigerator door and put the juice on the counter [and] pour the drink, but she can't carry it. ... Even simple things like getting a drink — it's done differently now. I don't think there is anybody in the entire world [who] has not made a bad choice. Do I wish they made a better choice? Of course. But I still love 'em. You just have to go on and deal with [it], get through it. It's just the way it is."

Destiny won't get her prosthetic leg for months. In the meantime, she refuses to use a wheelchair. She either hops or uses crutches.

We all make mistakes, but imagine making a bad decision that you will remember every day for the rest of your life. That is Destiny's and Rachel's new world. But if there is a sense of remorse or regret, it's not evident. The girls have adapted in a way that only kids can. They emanate teen bravado and resolve. And if it was their friendship that got them into trouble, their friendship may also be the thing that gets them through.

Late one afternoon in September, the girls were on their way to the Rochester Fair in New Hampshire, singing to music in the back seat, goofy and confident.

"This is why me and Rachel get along so much, because we were both there and [it] happened to us and no one else really knows," Destiny says. "So they'll just think, 'Oh, yeah, it was one day. Get over it. Live your life. Don't be all sad about it.' But they don't understand."

In November, Destiny got her 25-pound prosthetic leg. It was clunkier than she imagined — and within weeks of bringing it home, it was clear that she would need another surgery to relieve a painful pressure point. She missed so much school from all of the doctors' appointments that she was in danger of failing her freshman year.

This month, after a weeklong stay at the Shriners Hospitals for Children in Springfield, Mass., Destiny finally got the physical therapy and training to learn to use and trust her new leg.

For A Moment, Just Two Girls At The Fair

At the fair, the girls wound their way through the crowd, past aisles of fried-food vendors, toward the rides. Rachel's shuffle was hardly noticeable. Destiny, who was on crutches, stopped to rest. People streamed around the girls, and many stole a quick glance — some even nodded knowingly. The accident was big news in the area.

"Pretty much every day ... someone says something like, 'What happened to you?'" Destiny says. "And I'll tell them. And they're like, 'Oh, I heard about that. I'm so sorry.'"

"I think of all these different things that make me feel sad 'cause it'll be a little harder" on Destiny, her mother says. Del Santo adds: "I think of her when she gets older, just an elderly person hopping around on one leg. I mean, she'll be in a wheelchair, and I don't want to make her a cripple because she can do just about anything that anybody else can do — just in a different way."

At the Tilt-A-Whirl, the girls handed over their tickets. Destiny left her crutches behind and hopped to join Rachel in one of the dome-shaped cars. They spun around and around — and for a moment, they were just two girls, two best friends on a ride at the fair.

"I want it to be the way it was," Destiny says. "But I can't change it so I have to accept myself. So I guess that's what I'm doing."

Music by Zoe Keating is featured in this piece.