Accessibility links
Soul Guitarist Snooks Eaglin Dies At 72 Blind from birth, Eaglin learned to play the guitar by listening to the radio. He created mesmerizing rhythm and lead tracks from a unique style that utilized his thumbnail. Pianist Allen Toussaint says he was "unlimited on the guitar." Eaglin died Wednesday of a heart attack. 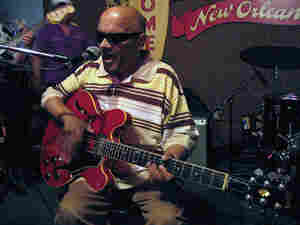 Soul, blues and R&B guitarist Snooks Eaglin died of a heart attack Wednesday in his hometown of New Orleans. He was 72.

In the 1950s, Eaglin was a one-man band on the streets of New Orleans. That's where folklorist Harry Oster saw him and asked him to record the album of acoustic blues that would become New Orleans Street Singer. But it wouldn't be long before Eaglin had a band to make the music he really loved: electric R&B.

Blind from birth, Eaglin learned how to play by listening to the radio. He created mesmerizing rhythm and lead tracks from a unique playing style that utilized his thumbnail.

Pianist Allen Toussaint says that Eaglin was "unlimited on the guitar." He played alongside Toussaint and Professor Longhair, and inspired the likes of Eric Clapton and Bonnie Raitt.

Eaglin was called the "Human Jukebox," pulling classic gospel songs and blues standards out of thin air, often to the bewildered chagrin of his bandmates in concert.